College teaches a lot of things, but in many cases, some important lessons are left out.

You may learn calculus, or how to interpret a James Joyce novel, but you won't learn many real life skills. That's a mistake in the the American education system that should be corrected so that graduating means being ready to live in the real world.

The three areas below are not the only things colleges should teach, but they are a great start. If students came out of school with a degree and knowledge in these areas, they would have things a lot easier. 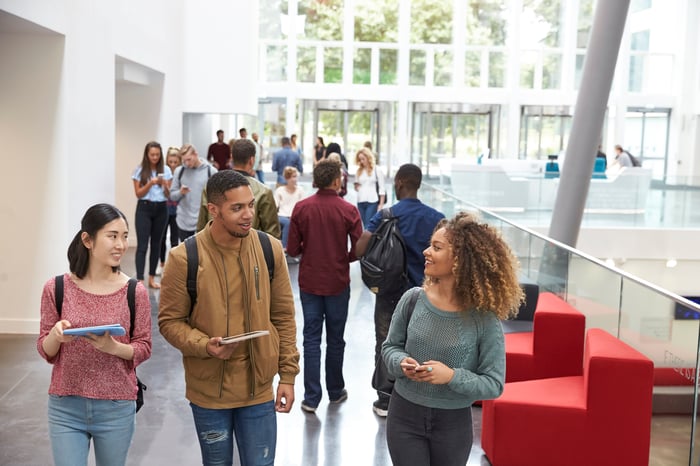 College graduates learn a lot of things, but there are also holes in their education. Image source: Getty Images.

How to manage money

Selena Maranjian: Few people are ever taught anything in school about managing their money, and the results are disastrous. According to the 2017 Retirement Confidence Survey, about 24% of workers said they had less than $1,000 saved for retirement, and a whopping 55% had less than $50,000. And per WalletHub.com, credit card debt in America sat at $979 billion at the end of 2016 -- the highest point in about a decade -- and is likely to surpass $1 trillion in 2017. Between 2015 and 2016, average credit card debt per household rose 6%, to $8,377.

What should college students learn? Well, there's a good chance that they will be graduating with student loan debt. That can make one's financial life challenging enough, so they should learn about the dangers of credit card debt, which tends to sport even more onerous interest rates. Learning to live below your means can help you keep credit card debt at bay, and such habits are best learned when you're young.

Money management lessons for the young shouldn't just be about avoiding dangers, though -- they can also be about grabbing opportunities. Few young people realize it, but they have a lot of what many investors crave: time. If they start saving and investing while they're young, their money will have decades in which to grow. That can make it easier to have a down payment when you're buying a home and it can even lead to an early retirement!

Check out the table below, which shows how much you might amass over several long periods if your money grows by an annual average of 8%:

Learning to be a savvy money manager while you're still young can improve your life in many ways.

The art of networking

Maurie Backman: It obviously takes a certain skill set to succeed at a job, but what could end up helping your career even more is the ability to build strong relationships with people. In fact, a study published last year on LinkedIn found that 85% of all jobs are obtained through networking.

Knowing the right people -- and establishing relationships with them -- can result in a world of career opportunities. After all, you're more likely to at least get your foot in the door for an interview if someone at the company you're applying to gives you a solid endorsement. Similarly, if you're vying for a job that comes down to you and one other candidate, a recommendation from a current employee could be the one thing that gives you an edge.

That said, though it's important to get out there and make strong connections, your goal in networking shouldn't be just to schmooze as many people as possible. Rather, you should work on connecting with the right people who can serve not only as industry resources, but perhaps one day vouch for your abilities in a hiring situation.

In fact, it would be extremely helpful if colleges were to spend some time guiding students on how to make these pivotal connections. Of course, we may not see "Networking 101" listed as an official full-credit course anytime soon, but most colleges do have career centers whose counselors ought to focus on the art of building a business network. Networking is one of the most effective ways to advance your career, and learning a thing or two about it could prove extremely useful, especially as you navigate the job market for the first time.

How to apply for a job

Daniel Kline: Most colleges have career placement offices but few mandate that students learn the process of applying for a job. That leads to students not knowing how to write a cover letter, create a resume, or go on a job interview.

When it comes to securing an entry-level job sometimes knowing just the basics makes all the difference. There may be very little on your resume, but it should still look professional and follow all the basic rules. In addition many applicants fresh out of school that have applied for jobs I was filling over the years have no idea what a cover letter should like.

I've received two sentence cover letters along the lines of "please see my attached resume." I've also been sent countless resumes with no cover letter at all -- robbing those young applicants of an important chance to explain why despite their lack of experience, they should be hired.

The lack of job interview training may be the worst omission most colleges make largely because it's such a simple thing to teach. I've been amazed over the years at how many college graduates show up late for their interview, dressed casually, and not carrying a copy of their resume.

These are easy fixes -- a few days of classes at most -- but most schools don't consider preparing students to apply for jobs as part of their mission. That's a glaring weakness that puts graduates from those schools at a major disadvantage.