Please ensure Javascript is enabled for purposes of website accessibility
Log In Help Join The Motley Fool
Free Article Join Over 1 Million Premium Members And Get More In-Depth Stock Guidance and Research
By Glassdoor - Dec 2, 2017 at 11:09AM

The fine art of communicating with recruiters doesn't come naturally to everyone. On one hand, you want to impress them and be enthusiastic so that they'll consider you for a position. On the other, you don't want to appear too eager or desperate. Still, job hunting often gets stressful, and no one likes playing the waiting game.

When a recruiter is the one person who is able to tell you whether you're being considered for a position, if you landed an interview, or if you actually got the job, it can be very tempting to reach out to them frequently to express your continued interest. There are definitely times when it's appropriate to check in, but it's very easy to cross into nagging territory if you're not careful. Here's how to know if you're driving the people who can help you land a gig crazy, straight from recruiters themselves. 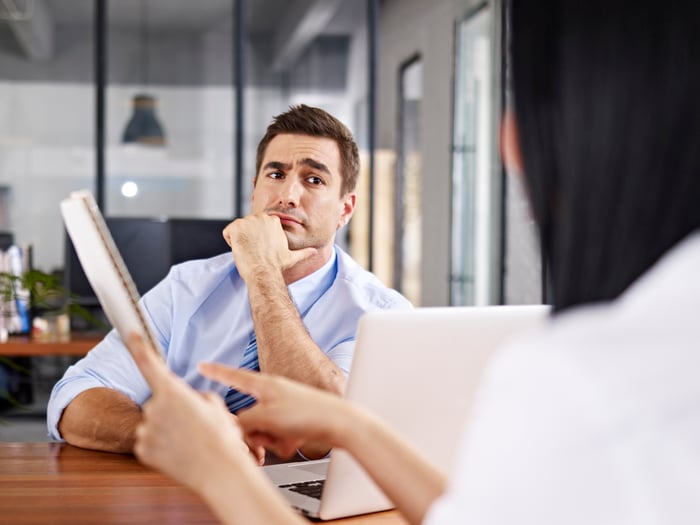 Sign #1. You've emailed them two days in a row without a response

There's likely a pretty good reason they're not getting back to you. If you've already interviewed or corresponded with a recruiter, don't worry if they don't get back to you immediately. "Each recruiter is most likely managing 50+ active candidates at a time, and it takes time to collect feedback from interviewers and then connect with hiring managers to decide what next steps look like for each candidate in play," explains James Parker, an Employee Recruiting Manager for Glassdoor. So what should you do if you've emailed a recruiter for feedback or to check in and haven't gotten a response? "Candidates should give at least a two-day window before seeking more information on the decision-making process," he says.

Sign #2. They told you they'd have a decision Friday, but you're checking in on Wednesday

You might feel like you're being proactive or simply showing how excited you are about a position, but most of the time, when recruiters say they'll get back to you on a certain day, they really mean it. "This can send the wrong message and come across as desperate or too pushy, especially when candidates cold call a recruiter for an update," says Linda Schubert, an Employee Recruiting Manager for Glassdoor. By all means, feel free to ask when you might hear back, but Schubert says you then have to respect the date the recruiter gives you in response. And if you don't hear back by the date they've given you? "Send a polite and concise follow-up email asking if there are any updates, or if there is anything the recruiter needs from you as the team looks to make their decision."

Sign #3. You reapplied for a job you didn't get

Maybe you think you didn't get a fair shot, or you want a certain company to know that you really want to work there, so you decide to submit your application again. Whatever the reason, when a candidate is rejected from a position and given feedback as to why, it's a pretty major misstep to then ask to be reconsidered the same position (or a similar one) right away. "We love to reconsider candidates, but a reasonable amount of time (6+ months) would need to pass where they could have gained new experience or skills that would make the hiring manager want to reinterview them," Parker says. If you do get rejected from a job you really want, his advice is to ask for feedback if it wasn't provided, then make an effort to develop skills in the areas needed. "When reapplying at a later stage, candidates should include a cover letter explaining how they have developed the skills that weren't sufficient previously," he adds." If you plan to do this, it's also a good idea to ask the recruiter what the appropriate timing would be to submit another application.

Calling, emailing, and Facebook messaging a recruiter all at once is a serious faux pas. "Sometimes I get the same question emailed, sent through LinkedIn, texted to me, and left in a voice message within the same day from the same candidate," Schubert says. "That doesn't do anything good to help their chances. There is a fine line between being proactive and nagging, and by bombarding a recruiter with messages that aren't essential, you are leaning toward the latter." It's best to stick to the same messaging medium the recruiter has used to communicate with you before, and if they haven't ever responded to you before, pick one method and wait a few days before trying another.

Sign #5. They say they'll reach out if anything changes

If a recruiter tells you that they'll be in touch when they have an opportunity for you or if anything should change in the future with the role you've applied for, it's likely that they are not inviting you to check in with them frequently. "At this point, it is safe to assume you should stop following up with the recruiter," Parker says. "If you are a great candidate, you better believe the recruiter will contact you the very second another role opens. There is nothing wrong with a follow-up email, but if you hear crickets, it's best to cut your losses and move on."