Please ensure Javascript is enabled for purposes of website accessibility
Log In Help Join The Motley Fool
Free Article Join Over 1 Million Premium Members And Get More In-Depth Stock Guidance and Research
By Maurie Backman - Feb 22, 2018 at 6:02AM

Learning that you didn't get a raise while others did is a tough pill to swallow. Here's what you can do with that information.

Though we're often advised not to talk salary with our coworkers, an estimated 30% of younger employees do so anyway. Even older workers don't always keep their mouths shut when it comes to compensation. The problem, of course, is that the more you share and learn, the more you open yourself up to problems. In fact, over the course of what might seem like a fairly innocent conversation, you may come to learn that although you haven't gotten a raise in quite some time, your colleagues all managed to snag a pay boost not so long ago.

Your first reaction to that news might be to yell, storm out, or march yourself into your manager's office and demand an explanation. But as natural as that sort of response might be, you don't want to go that route. Rather, here's a sound approach for dealing with the fact that you were seemingly the only one who didn't get a raise. 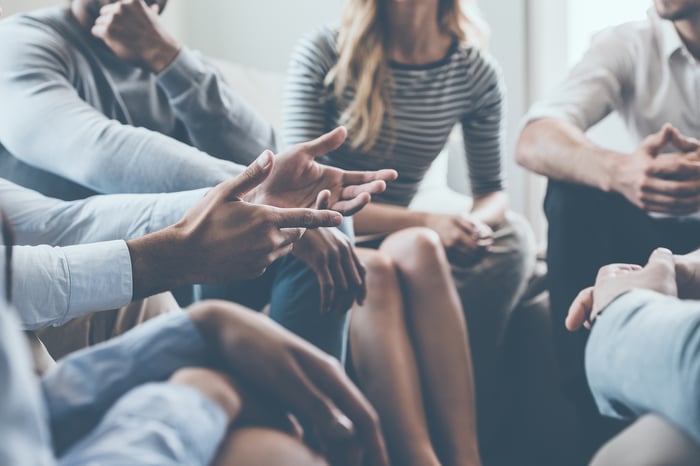 If you're in a situation of knowing you were the only one to miss out on a raise, it means your coworkers clearly aren't shy about sharing. So while you're at it, you might as well gather as much information as you can about what went down. Aim to find out by what percentage your colleagues' salaries went up and whether they scored any additional perks, like a bonus. Furthermore, find out what base salaries they had to begin with for a closer comparison.

2. Figure out if your performance caused you to lose out

It may seem unfair that pretty much everyone around you got a pay boost when you didn't. But there may be a simple explanation: Your performance wasn't up to par, and everyone else's was.

Unless you happen to be privy to your coworkers' performance reviews, the truth is that you have no way of knowing whether their raises resulted from across-the-board improvements or not. What you do know, however, is how well you performed this past year and how that translated in terms of your own review. So think back: Did your boss have mostly good things to say, or did you come away with more criticism than praise? Similarly, assess your own recent performance. Did you meet or exceed expectations or fall short on multiple occasions? Before you get up in arms about your glaringly absent raise, think about whether you truly deserved one and consider that your colleagues may have outperformed you.

Let's assume your performance this past year was solid, and that you added just as much measurable value to the company as your colleagues did. If that's the case, then your manager's logic for not giving you a raise could boil down to the fact that you were already better compensated than your coworkers to begin with.

To see if this theory holds water, do some research to see how much someone in your role should be making. Job site Glassdoor has a useful "Know Your Worth" tool that lets you compare salary data based on job title and geographic location, so plug in that data and see where you stand. If it turns out you're making more than the typical person in your region with your job description, then it might explain why everyone got a boost and you stayed status quo.

If you determine that you were passed over for a raise unjustifiably, you'll no doubt want to talk that out with your boss. But before you do, comb through your company's employee handbook and make sure talking salary isn't against the rules.

Assuming it isn't, sit down with your manager, explain that the topic of raises came up, and share what you learned. State that while you understand that no two employees are the same, it seems as though a handful of workers got a raise and you were somehow left out in the cold. Then, present your boss with the salary data you researched, assuming it backs up your point, and ask why you didn't receive a similar increase. Your manager might have a valid reason behind the decision, so hear him or her out -- but don't be afraid to counter with respectful arguments of your own.

Finally, accept the fact that fighting for the raise you never got might bring about some negative repercussions. Even if you broach the topic courteously, your manager might resent that you gathered internal salary information on the sly. He or she also might choose to stick to the original decision and leave your salary unchanged. You never really know how this sort of conversation might shake out, but what you do know is this: If you don't make your case, you won't see a dime more for the foreseeable future.