Being fired is difficult enough in itself. Couple that with the fact that you often have to discuss why you left your previous company in job interviews, and it often feels like adding insult to injury.

While it's perfectly normal to be frustrated with this situation, though, you shouldn't feel hopeless -- many people before you have been in that exact same situation. In fact, "The majority of the workforce will get laid off [or fired] at least once in their career," says career coach Jena Viviano. "It happens more often than you think." 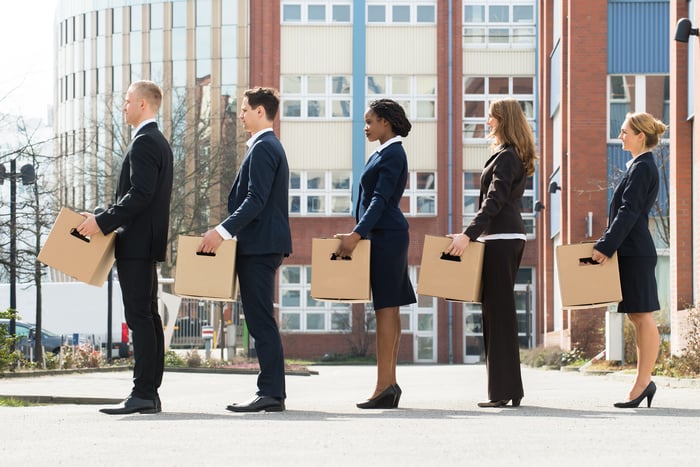 So the next time you hear the dreaded question, "Why did you leave your former position," don't sweat. Just use the following tips to give a truthful, tactful, and flattering response.

Before you even begin interviewing with other companies, it's important to know exactly what you can and can't say per your arrangement with your former employer.

"Before you find yourself in a situation where this question is likely to be asked, check with your company's HR department and with your boss to determine how the company will represent the separation," recommends Roy Cohen, career coach and author of The Wall Street Professional's Survival Guide. "The story you tell must be aligned with what the company says. Some companies have strict policies about disclosing any information beyond dates of employment."

Violating these policies may put you in hot water with your former employers, so it's always better to do your due diligence and verify what you can and cannot say.

"You don't want to violate company policy even though you already left your employer. They can sue you or claw back your severance," Cohen adds.

Discussing how you were fired is probably the last thing you want to bring up in a job interview, but it's important to show your employers that you're truthful and trustworthy -- after all, even if you lie about being fired in an interview, they could easily discover the truth when they tap your references and former employers.

"I always tell clients it's better to bring up the elephant in the room than to wait for them to dig in and find out," Viviano says. "By bringing it up and being transparent, you are able to build trust [regarding] an otherwise uncomfortable topic."

"Never stretch the truth or misrepresent your experience no matter how tempting or desperate you may be to get the job," Cohen agrees. "Most companies will fire you on the spot if it is discovered that you lied on the application or in the interview regarding your separation."

However, you don't want to be honest to a fault. For example, instead of saying "I was fired," you can use a softer phrase such as "I was let go" or "The company and I parted ways." Then, make sure you have a brief explanation of what happened.

"You will need a defensible -- not defensive -- strategy to explain the departure. That's where you acknowledge what happened, but you also provide some context that appears unbiased," Cohen says. Otherwise, "You leave it up to the interviewer to form their own opinion -- which may not be favorable. It may also appear that you are intentionally hiding the truth if you omit important information."

While you want to portray yourself in a sympathetic manner when discussing how you were fired, you shouldn't come across as blaming everything on your former employer, either.

"It's tempting to just put it all on bad managers or a trigger-happy company, but showing self-awareness is really important to your personal growth and your business success, so you do want to acknowledge your part in the issue and talk about how you believe you could do it differently in a new situation," advises Jill Santopietro-Panall, HR consultant and owner of 21Oak HR Consulting, LLC:

For example, one friend was recently terminated by a cross-country manager who had barely ever met him and hadn't formed a great relationship with him. In that situation, I would say 'It didn't work out for me at XYZ Company, as I don't believe our employee-manager relationship was as strong as it could be without ever being in the same place. In the future, knowing that I had a manager who wasn't there on a day-to-day basis, I would structure my interactions differently to be sure that my manager feels more engaged in our team's work and challenges.'

"Don't ever bash the employer or blame it all on them," Viviano agrees. If you do, they may wonder if you'll do the same to their company if you were to receive an offer. "Take ownership of what you did wrong, and try to move on from the question as fast as possible."

Once you've given a brief explanation of why you were let go, it's time to pivot to what really matters: why you're a good fit for the job.

"Focus on [being] free to look for new employment which is more in line with who you are," says April Klimkiewicz, career coach and owner of bliss evolution. "Remind them what a great fit you are for the position for which you're interviewing."

Klimkiewicz recommends following up your explanation with a sentence like, "The good news is, my vision aligns with your company's mission, and I'm really excited to work for an organization that values the same things I do." And remember, it never hurts to reiterate a few of your strengths for good measure.

Being fired is an incredibly difficult time in anyone's life, but it's far from the end of your career.

"If J.K. Rowling, Jerry Seinfeld, Oprah Winfrey, and Walt Disney all found a way to bounce back from being fired, so can you," Klimkiewicz says.

Got Fired? Here’s How to Talk About It in Job Interviews @themotleyfool #stocks Next Article
Current