Please ensure Javascript is enabled for purposes of website accessibility
Log In Help Join The Motley Fool
Free Article Join Over 1 Million Premium Members And Get More In-Depth Stock Guidance and Research
By Maurie Backman – Apr 4, 2018 at 6:49AM

Maybe you'll try it, too.

Though money isn't the only important aspect of a job, it's a big one to consider. And since most Americans are behind on saving, it certainly helps to boost your earnings as much as possible. But since companies don't tend to just give away money, snagging a salary boost often means having to take the uncomfortable step of asking for a raise -- something the bulk of workers are hesitant to do.

Younger workers are a bit bolder than their older counterparts in this regard. According to Bank of America, 46% of millennials have asked for a raise over the past two years. By contrast, just 36% of Gen Xers and 39% of baby boomers did the same. Better yet, 80% of those millennials who spoke up and asked for more money actually had their wishes granted. 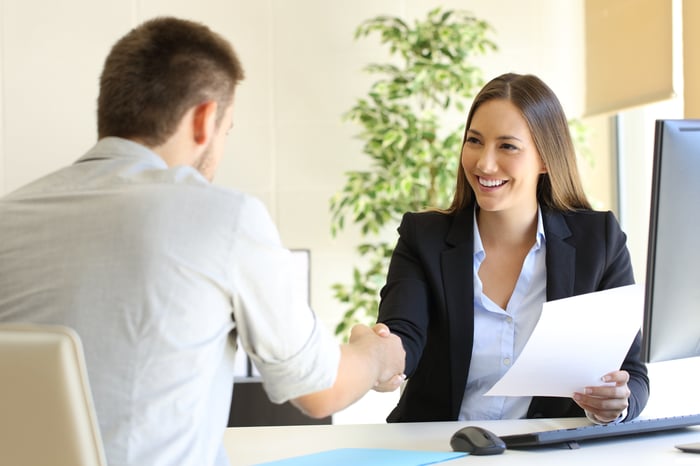 If you can't remember the last time you got a raise, or have reason to believe you're due for one, it pays to have that important conversation. Here's how.

It's one thing to think you deserve more money, but it's another thing to determine with certainty that you're being underpaid within your industry. Pull off the latter, and your boss will have a much harder time saying no to that raise. That's why you'll need to research salary data in your field before sitting down with your manager to discuss an increase.

Job site Glassdoor has a handy "Know Your Worth" tool that lets you compare salary information by job title and geographic location (keeping in mind that salaries within a given field can vary from region to region). If you're able to pull data showing that your earnings aren't up to par, you're more likely to get what you want.

Maybe you're able to dig up data showing that your company could do better for you salary-wise. But that's only half the argument. To land that pay boost, you'll need to prove to your boss that you're worthy of commanding top dollar. You can do so by coming in prepared with details of how you've contributed to your company's success, whether it was by rolling out a customer-service training course or fixing a time-zapping bug for the company's software. If you can show how your efforts saved or made the company money, even better. The key is to highlight your accomplishments so your manager is inclined to compensate you as well as possible.

3. Ask at the right time

Money is always a delicate topic to broach, so it's crucial to get your timing right. Make sure you've been at the company long enough to warrant a raise. If you started three months ago, for example, it's not yet time. Similarly, don't ask for a raise just a few months after getting one; you'll risk coming across as greedy.

If you are ready to move forward with that conversation, schedule it strategically. If your company is in the midst of an upper management transition, hold off until things settle down. Similarly, don't ask your bosses for a sit-down the day before one of them is set to leave for vacation, or the day they get back. Wait until things aren't in flux, and your managers will be able to give you their full attention.

Asking for a raise at work takes guts. The upside? If you're successful, you'll have more money to save, spend, and use as a starting point for future negotiations. And that's precisely why it pays to put yourself out there.