You're in the home stretch. You have an offer on the table from a potential employer (or even your current employer) and you are at a three-way crossroads between accepting an offer, declining, or submitting a counteroffer. Anxiety builds, doubt may creep in, and palms get sweaty. "Just don't blow it" comes to mind, flashing like a giant neon sign.

Negotiating a salary or compensation package is a stress you can manage. It's like an intricate dance learned over time: take one step forward, two steps to the side, spin, then come together. Keep in mind, however, negotiations are no spin on the Dancing With the Stars ballroom floor -- no extravagant or wild displays, no improv. Simply stick to the steps.

To teach us the negotiation dance, we turned to Deepak Malhotra, the Eli Goldston professor of business administration at Harvard Business School and the author of Negotiating the Impossible. Not only does he teach MBA students the 15 rules of negotiation, he also warns of the pitfalls that we all may face as we seek to get an ideal package from employers. And one point he is sure to make is that salary negotiations are about more than just base pay or the zeros on a check. They're about the whole package.

"At many companies, compensation increasingly comes in the form of stock, options, and bonuses linked to both personal and group performance," said Malhotra. These factors plus benefits, time off, location (such as working from home) and title are all on the table during negotiations. And now, perhaps more than ever before, in many industries negotiating the finer details is par for the course.

He continued, "Job market complexity creates opportunities for people who can skillfully negotiate the terms and conditions of employment. After all, negotiation matters most when there is a broad range of possible outcomes."

Now that you have an offer in hand, it may be time to negotiate. Malhotra shares his best advice for how to handle a salary counteroffer like a pro. 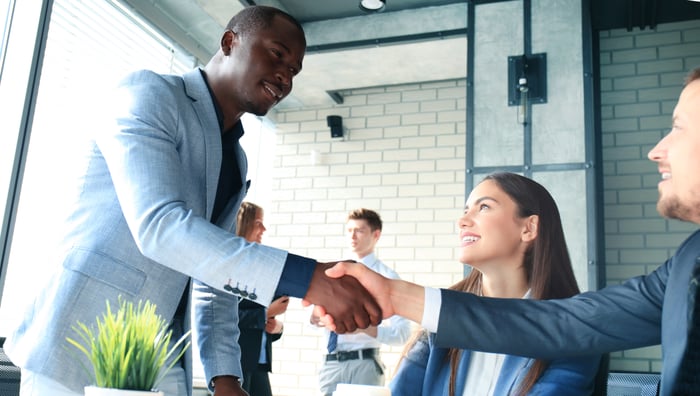 1. Be firm and persuasive

"Don't just state your desire (a 15% higher salary, say, or permission to work from home one day a week); explain precisely why it's justified (the reasons you deserve more money than others they may have hired, or that your children come home from school early on Fridays). If you have no justification for a demand, it may be unwise to make it."

"If you intend to negotiate for a better package, make it clear that you're serious about working for this employer."

They may like you. They may think you deserve everything you want. But they still may not give it to you. Why? Because they may have certain ironclad constraints, such as salary caps, that no amount of negotiation can loosen. Your job is to figure out where they're flexible and where they're not. If, for example, you're talking to a large company that's hiring 20 similar people at the same time, it probably can't give you a higher salary than everyone else. But it may be flexible on start dates, vacation time, and signing bonuses. On the other hand, if you're negotiating with a smaller company that has never hired someone in your role, there may be room to adjust the initial salary offer or job title but not other things. The better you understand the constraints, the more likely it is that you'll be able to propose options that solve both sides' problems.

"My advice is to never lie in a negotiation. It frequently comes back to harm you, but even if it doesn't, it's unethical."

5. Think beyond the cash

"Don't get fixated on money. Focus on the value of the entire deal: responsibilities, location, travel, flexibility in work hours, opportunities for growth and promotion, perks, support for continued education, and so forth."

6. Submit your counter all at once, not piecemeal

If someone makes you an offer and you're legitimately concerned about parts of it, you're usually better off proposing all your changes at once. Don't say, 'The salary is a bit low. Could you do something about it?' and then, once [the person's] worked on it, come back with 'Thanks. Now here are two other things I'd like...' If you ask for only one thing initially, she [or he] may assume that getting it will make you ready to accept the offer (or at least to make a decision). If you keep saying 'and one more thing...,' she [or he] is unlikely to remain in a generous or understanding mood.

7. Remember this is not reality television -- you are not on The Apprentice

"Resist the temptation to prove that you are a great negotiator. Fighting to get just a bit more can rub people the wrong way -- and can limit your ability to negotiate with the company later in your career, when it may matter more."

Sometimes we do so inadvertently -- we're just trying to show strength, or we're frustrated, and it comes off the wrong way. Your counterpart may do the same. My personal approach when at the receiving end of an ultimatum is to simply ignore it, because at some point the person who gave it might realize that it could scuttle the deal and will want to take it back. He can do that much more easily without losing face if it's never been discussed. If someone tells you, 'We'll never do this,' don't dwell on it or make her [or hjm] repeat it. Instead, you might say, 'I can see how that might be difficult, given where we are today. Perhaps we can talk about X, Y, and Z.' Pretend the ultimatum was never given and keep her [or him] from becoming wedded to it. If it's real, she [or he]'ll make that clear over time.