Please ensure Javascript is enabled for purposes of website accessibility
Log In Help Join The Motley Fool
Free Article Join Over 1 Million Premium Members And Get More In-Depth Stock Guidance and Research
By Glassdoor - Updated May 2, 2018 at 4:29PM

Ways to reach out -- even to someone you don't know.

The most awkward networking attempt I've ever witnessed happened in my senior year of college. A former executive at NBC who had started his own production company came to talk to the film department at my school about entertainment careers, and I went to check it out. The speaker was great -- he had plenty of insight, advice, and personal anecdotes, and I stayed after to chat with him a bit (mainly about our mutual love of 30 Rock if I'm being honest).

Ahead of me in line was another woman who, rather than asking a thoughtful question, hit him with "Can you help me get an internship at your company?" Unsurprisingly, he gave her a strange look, said that she should look up the opportunities available on their careers page, and moved on. After all, why in the world would he vouch for her when he didn't know anything about her? 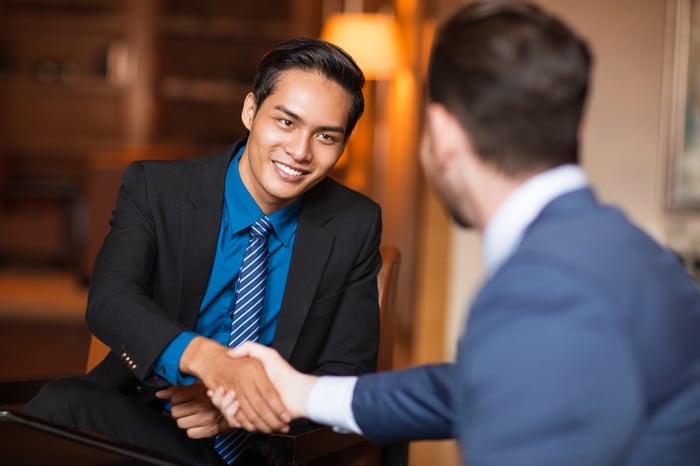 I understand why you might want to ask someone to help you get a job at their company -- referrals are a powerful way to get your foot in the door, and studies have shown that recruiters view referral candidates as higher quality than other sources. But if you don't ask for one the right way, you may be doing more to hurt your application than help it. An out-of-the-blue request like the one I witnessed can come across as pushy, crass, and just plain self-serving.

To help you navigate that fine line between polite and presumptuous, we reached out to experts to hear how they suggest approaching someone for a referral -- here are their tips.

When asking someone you know well

If you're close to somebody connected to the company -- be it a friend, family member, or former colleague -- you're in luck. Assuming you have a good relationship, they will probably be happy to help you out.

"Be honest with them. Tell them what it is you're ultimately looking for, and give them an idea of how they can help you," recommends career coach Carlota Zimmerman.

Keep in mind, though, that a request for a referral -- even when asking a close friend -- is not a guarantee that you'll receive one. If somebody can't vouch for your work quality, they may not be comfortable putting themselves on the line for you. Because of this, it's polite to give somebody an out, says Roy Cohen, career coach and author of The Wall Street Professional's Survival Guide.

"Build in an exit option for friends, family, and colleagues. Sometimes, and to our great surprise and disappointment, the people closest to us will act weird when these sorts of requests are made," Cohen says. "Rather than jeopardize the relationship, let the request go if there is any waffling."

Cohen suggests saying something like: "I wonder if I can impose on you...and it's not an issue if you can't. I'm trying to get a referral to [company name] and I seem to remember that you may know that person or know someone who does. It would really mean a lot to me. Let me explain why."

If they do end up referring you, don't take it for granted.

"Afterwards, take them out to dinner, or buy them a small thank-you present," Zimmerman advises.

When asking someone you kind of know

Asking for a referral from an acquaintance -- say, a friend of a friend or former coworker who you only talked to a handful of times -- requires a little bit more finesse. One way to build goodwill and improve your odds of a response is reminding them of your connection to each other.

"It is always best if you and the acquaintance share a good mutual friend or colleague in common. That will establish your credibility as someone who is not likely to be a source of embarrassment," Cohen says. "Send a brief note first to break the ice and to provide context as to why you are reaching out."

Cohen suggests: "You may remember that you and I share so-and-so in common. I seem to recall that you may also have a connection to [who you want to meet or where you want to go]. I heard that there may be an opportunity there and I wanted to reach out, but I don't know anyone at the firm. Can I impose on you? Let me tell you about my background so that you know a little bit more about me."

This last part is key, Cohen says, as "people we barely know or know peripherally on a social basis may have little knowledge as to our backgrounds. It is always a good idea to remind them by sharing information that they may be unaware of and that may even impress them."

This will also allow them to give hiring managers and recruiters a better idea of what you have to offer, which is key if you want to get their attention.

And just as you would with a friend, it's nice to express your appreciation for a referral by thanking them with a phone call, note or small gift.

When asking someone you don't know

If you don't know somebody who works at the company you're interested in, not all hope is lost. These days, you can easily go online to figure out who works at a company and reach out to them. It's best to seek out a recruiter, the hiring manager for the role or someone who is on the team you're interested in joining. Make sure that you're not asking for too much too quickly, though, as that will turn people off of helping you.

Once you reach out to someone via LinkedIn or email, "always begin by expressing your gratitude,  and repeat that message at the very tail end of your request," suggests Cohen.

Then, "use your interest in a position at the company they are working at as a way to get to know this person," advises J. Kelly, author of BUILD YOUR DREAM NETWORK: Forging Powerful Relationships In A Hyper-Connected World.

Kelly suggests saying: "I know we've recently connected on LinkedIn through XYZ, and I recently saw the X department at your company has an open position. I'm intrigued by it. Any chance I could ask you a few questions about the company and the role?"

"Use your interest as the way to start a conversation and be open to where it leads to," she adds.

Ask a few questions about the company culture, responsibilities of the role, what they love about working there, etc. "Then, you can begin a gentle segue into mentioning that you too would like to work for that company," shares Sara Causey, CEO of SEC Technical, LLC.

"Have a strong pitch ready as to why you want this referral, your goals, what you bring to the table (education, experience, expertise), and crucially, why you believe this person can help you," Zimmerman suggests. "Remember that you're essentially asking a stranger to open doors for you, so how you present is how you'll be perceived."

Don't forget to thank the person for their time, and if they do end up providing you with a referral, keep them looped in on next steps.

"In any situation where you ask for a referral and someone grants it, circle back with that person on the outcome! Nothing is worse than [being] left in the dark as to whether or not an introduction or interview came through," Cohen says. Not to mention, "By following up, you're also more likely to receive help from that person again in the future."

Asking for a referral may seem intimidating, but it's often an effective way to head to the top of the candidate list, so it's worth the request -- as long as you handle it delicately. But if you demonstrate respect for the other person, show thoughtfulness in your approach, and thank them for their time, you'll have nothing to worry about.

This article originally appeared on glassdoor.com.