Paid time off is among the most coveted workplace benefits out there. Yet a large chunk of Americans who are eligible for paid vacation make the glaring mistake of not using it. A disturbing 21% of U.S. employees admit to having left vacation days on the table over the past year, according to new data from Kimble Applications. And that's a decision that could hurt them, as well as other employees, in the long run.

Why can't we give ourselves a break?

Some workers don't take vacation because they're not entitled to paid time off. But for others, it's a matter of job-related stress and demands. Specifically, 27% of workers say they have too many things going on at the office or too many pressing deadlines to take time away, while 13% skimp on vacation days because they worry they'll return to piles of work. 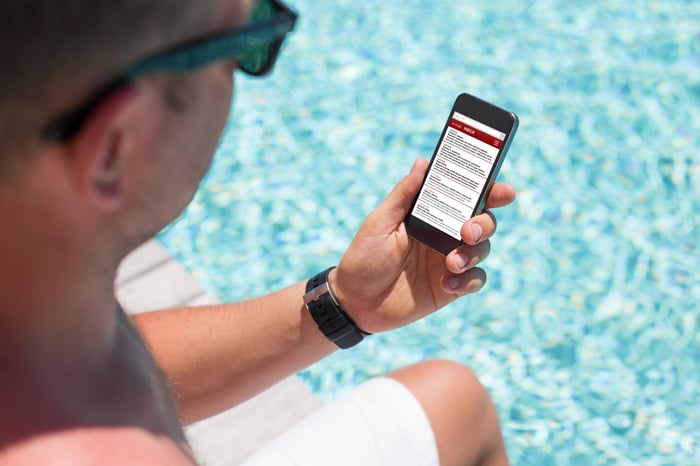 Furthermore, while some employers go so far as to force workers to take vacation, others encourage workers not to take time off, either directly or indirectly. In fact, 19% of employees say they've felt pressured by their companies to avoid spending time out of the office. And more than 25% say that the mere act of submitting a time-off request makes them feel anxious.

Even those workers who do manage to take vacation don't get a true break from the grind. Nearly 50% of employees admit that they actively check in on work matters while away from the office, and almost 30% claim they're expected to be available for emergencies.

Clearly, this points to a dangerous trend. The fact of the matter is that workers need time away to recharge and tend to personal matters. If they don't get it, they risk burning out and growing less productive, not more. And while companies should play a role in encouraging and enabling employees to get that time away, it's something workers need to push for at the individual level.

Don't pass up that vacation time

So how can you, as an employee, manage to take all of your allotted vacation time without experiencing backlash? For one thing, be strategic in when you schedule your time off. Aim to get away during less busy periods at work so that you don't risk missing deadlines or falling behind on major projects. Along these lines, if possible, try not to take time off during the holidays because that's when your company likely will be most understaffed. If you request vacation time the same week when half your team will be gone, your manager is more apt to say no.

Additionally, find a couple of colleagues who can serve as backups while you're away, and carve out the time to bring them up to speed before you're set to be out of the office. This way, you won't have to worry about falling short on deadlines or coming back to as large a mountain of work.

But notice that I said "backups" -- as opposed to a single backup. You can't really expect one person to cover for you fully when you're used to working 40 hours a week or more, so divvy up that load among several colleagues. It may require a bit more time on your end to get different people in sync, but it'll make everyone's life easier (including your own) while you're away.

Finally, talk to your manager before heading out on vacation and set expectations with regard to your availability during that time. It might be perfectly reasonable for you to log into your email once each night to address priorities, but if you're looking to leave your phone and laptop at your hotel while you enjoy your days, make that clear from the start.

Similarly, set deadlines for completing the work that piles up while you're out. Maybe you normally would complete certain requests within 24 hours, but if you're coming back to 17 of them after a week away, you'll obviously need some time to get everything done. Establishing reasonable expectations for catching up on missed work can help you make the most of your time off without stressing about it.

You deserve a mental and physical break from the office, so if you're fortunate enough to have paid vacation time, don't give it up. Doing so not only hurts you, but sends the message to employers that workers don't really need that time off. And we all know very well that that's the furthest thing from the truth.