Between the feeling of being thrust into the spotlight, the one-on-one setting with your manager and the gravity of what's at stake, performance reviews can feel pretty uncomfortable. And when you're made to feel uncomfortable, sometimes you aren't always the most conscious of (or careful with) your words. But if there's one time that you want to communicate effectively, it's then. After all, your performance review is often the one chance you get to push for a raise, secure a promotion, or even save your job.

To make sure that you don't unintentionally sabotage yourself, we've put together a list of things that you'll want to avoid saying. Steer clear of these words, and you'll be that much closer to passing your performance review with flying colors. 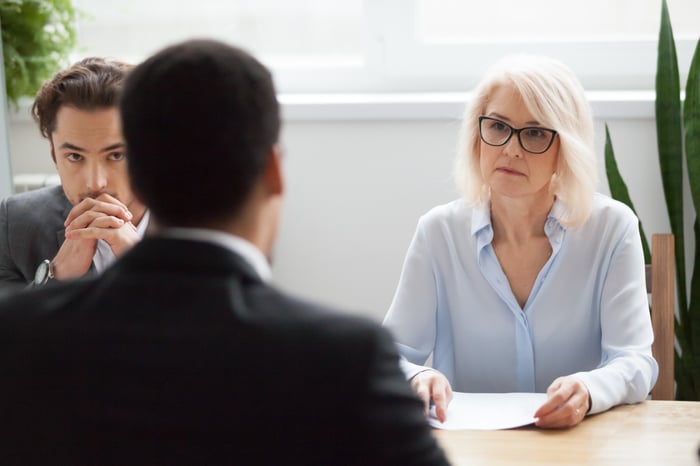 It's human nature to defend yourself. But when it comes to your performance review, check your ego at the door.

"Now is not the time to go into a long explanation about why a mistake wasn't your fault...Even if it's the truth, it makes you look unprofessional, vindictive and lacking self-awareness," says career coach Jena Viviano. "Instead of saying it wasn't your fault say, 'I appreciate the feedback and that is definitely something I'm working on for the future...Now probably isn't the time, but perhaps we can schedule another time to discuss.' This gives you the opportunity to collect your thoughts, come to the table calmly, and pragmatically explain the incident."

While you don't want to dismiss your manager's feedback, being too quick to say yes isn't the right move, either.

"'Yessing' your manager to death might seem like a good way to appear agreeable, but nothing could be further from the truth. True leaders are not yes people, nor do they like to surround themselves with yes people," says Scott Stenzler, founding partner of recruiting firm Atlas Search. "Research shows that yes people tend not to think independently, can be intellectually dishonest, lack sincerity, and often add little to no value to the organization."

Instead of simply "yessing," show your manager that you understand and acknowledge their feedback.

"Let your manager finish their thought. Don't eagerly chime in before they finish speaking -- instead, pause momentarily to make sure they're done, which has the double benefit of indicating that you're carefully considering their point, and only then let them know you agree," Stenzler recommends. "But most importantly, be sure to follow it up with all the reasons why you agree."

It's communication 101 -- when discussing a sensitive topic, never lead with "you" statements. In a performance review, this might include statements like "you said I was going to get a raise," "you didn't clearly outline expectations," etc.

"'You' statements can come across as accusatory and blame ridden," says Jen Brown, founder and director, The Engaging Educator. "Instead of 'you,' focus on 'I' -- I understood, I'm confused, I'd like to discuss."

Going one step further, adding a "but" can be even more antagonizing.

"When you couple a 'you' statement with the word 'but,' you've created an argument," Brown says. "For example, if you said... 'You said [x], but I think [y],' you've elevated your own opinion above the other, leading to a confrontational situation" -- the last thing you want during a performance review.

To get your point across in a nonconfrontational manner, you only need to make a small tweak.

"Instead of 'but,' the word 'and' works just as well," Brown says. "Taking the above example again, the conversation could sound like: 'I heard you say [x] and I've been thinking [y], can we discuss this further?' [This] will open conversation instead of elevating one opinion above another."

Lots of people have trouble taking a compliment. But if there's one time you don't want that to happen, it's during your performance review -- your No. 1 moment to prove the value that you bring to your company.

"Although it's important to give credit where credit is due, it's equally important not to deflect your personal accomplishments to other people," says April Klimkiewicz, career coach and owner of bliss evolution. "If your supervisor is congratulating you on a job well done, say 'Thank you! With the help of the team, I was able to accomplish the goals we set forth. I'm very proud of this accomplishment.'"

This phrase is better suited for the elementary school playground than the office.

"Aside from sounding like a child, the idea of something being 'fair' in the workplace is pretty subjective and emotional," Brown says. "Think about why you feel it isn't fair. Use specific language to define what isn't fair -- and if you keep getting back to 'It isn't fair,' maybe you have hurt feelings."

"These are valid -- just be sure to temper the emotional response with facts, especially in a review," Brown continues.

Let me be clear -- your performance review is absolutely a great time to make your case for a raise, but asking for it point-blank like this is probably not going to convince anyone.

"Now is not the time to say you need a raise. Now is the time to prove and show you deserve a raise. There is a big difference," Viviano says. "Come to your performance review with a clear understanding of your accomplishments and how they've provided results for the company. Then when it comes for you to speak during your review, talk about the things you've accomplished that you'd like to highlight."

Once you've proven your value, you can talk about why you deserve a raise.

8. "That's not part of my job description"

It might not be written in your job description, but if you want to be seen as a top performer, going above and beyond to help from time to time never hurt.

"Almost every job description ends with, 'and other duties as assigned.' Stating that some function is not part of your job description can make it look like you're trying to shirk work," Klimkiewicz says. "Instead, be a team player and let your supervisor know you were not clear that particular duty was expected of you, but now that you know, you'll be taking it on."

There's a time and a place to bring up concerns about a colleague to your manager, but your performance review isn't it.

"When you talk about people who aren't there, you're avoiding the relationship in front of you. It's really easy to talk about another person when they aren't there," Brown says. "Instead of deflecting, think about why you are bringing someone else up. Are you apprehensive? Are you trying to avoid the real meat of the situation? Reflect on the why and address the real issue."

Again, recognizing the feedback that your manager gives you is crucial, but a statement like "I know" can come off the wrong way.

"This can sound defensive to your supervisor when they are trying to give you constructive feedback," Klimkiewicz says.

"Keep in mind that 'I know' can be heard as 'so what.' And if you say 'I know' enough, then you run the risk of sounding like a know-it-all, which is not a good look," Stenzler adds. In addition, "if you recognize there's an area where you can improve, but acknowledge it by only saying 'I know,' then all you have accomplished is making it clear that you see there's a problem but don't care enough to find a solution," he says.

Instead, Stenzler suggests "[coming] to your performance review prepared with a clear set of actions that you have implemented, or plan to implement to remediate that weakness. Be prepared to explain why some things worked and why others didn't. Your manager took the time to prepare for the review; you should, too."

Performance reviews are all about growth, and phrases like this show an unwillingness to change and develop.

"In Carol Dweck's groundbreaking book Mindset, she teaches that the most successful executives are the ones who are able to move slightly outside of their comfort zone...Our clients, the companies we place people with, always report a higher rate of success hiring professionals who employ a growth mindset," Stenzler shares. "Let your manager know that you are willing to take on new responsibilities and are prepared to put in the hard work to grow into increasingly challenging roles within your organization."