Learn what to do -- and what not to do -- by observing colleagues.

Sometimes you can learn just by keeping your eyes open and watching the people around you. Your coworkers have lessons to teach even if they're not intending to actually do so.

Not every lesson, of course, is positive. You might learn what not to do by watching the actions of someone else, but that's certainly better than learning it by making your own mistakes.

Your coworkers can be great teachers, and you can learn by watching, asking questions, and finding ways to work alongside people. That can lead to important lessons that help not just at the office, but also in life. 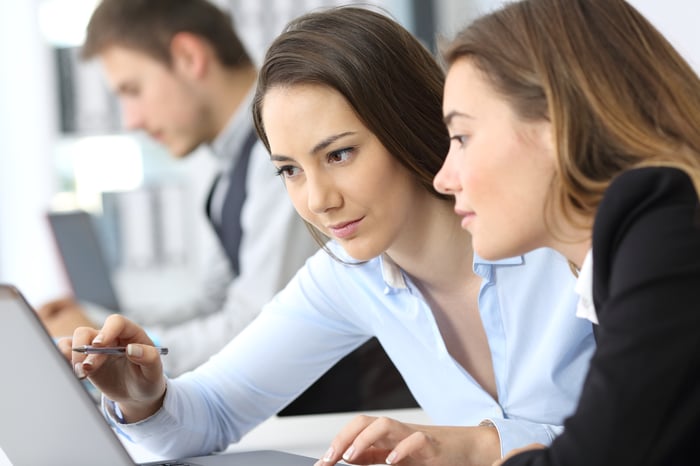 Coworkers can teach you a lot. Image source: Getty Images.

Help others, and ask for help when it's needed

Maurie Backman: When I worked for an online marketing company, I had a colleague who always went out of his way to help people. He left shortly after I started, but he had an impact on me. I decided I would aim to follow in his footsteps and be generous with giving others assistance.

As the resident content editor, I was often called upon by colleagues to do things like proofread presentations, review important emails for grammar, and spot-check important reports. And while these tasks obviously ate into my own work time, I really was happy to pitch in.

I never expected to get much out of my actions other than gratitude from the people I helped, but when my year-end performance review rolled around, one of the things I was praised for was being a true team player. Ironically, though, the one thing I was dinged on during that review was not asking for help enough myself.

It really got me thinking about that coworker who'd inspired me to give of myself. I realized that he, too, would often approach me for assistance with things like editing the web design copy he created or proofreading client sites before sending them live. I also realized that there's nothing wrong with leaning on others, especially if you're more than willing to step up when it's your turn to assist.

I've never been good at asking for help -- I'd much prefer to give it. But my colleague helped me understand that it's OK to do both.

Selena Maranjian: I once had a coworker who was very talkative. Very talkative. Some others and I would occasionally avoid this person, especially when we had a lot to do. The person was very nice and pleasant and even effective at their own job, but there was just a major downside.

This led me to realize that it's kind of useful to assess yourself as a coworker. Try to put yourself in others' shoes to see how they might see you. Do you interrupt others' work very often? Do you gossip? Do you borrow things and never return them? Do you take credit for others' work or talk loudly on the phone on personal calls (or even business ones)? Do you only shower once a week, or are you a downer, always complaining about things? There are lots of ways in which you might be an annoying coworker without ever realizing it.

If you want to approach this self-assessment in an especially rigorous way, you might invite coworkers to anonymously type up a few sentences on what your good and could-be-improved points are as a colleague and to leave them in a designated box. Each of us can be even better as a colleague than we are now, and being a pleasure to work with can only help in your career.

Go above and beyond

Daniel B. Kline: When I worked for my family's ladder and scaffolding business, I was lucky to be mentored by two long-time employees. Duane ran (and still runs) our manufacturing facility in New Hampshire, while Steve, who has since retired, was vice president of sales.

These two men never explicitly said "here is a lesson," but they showed me how to operate through their actions. I watched both of them find ways to do the impossible for customers. Sometimes that meant long drives before the sun even came out to bring a needed piece of equipment to a job site. In other cases, it might mean hours working the phones to find the materials needed for a rental or to make something that a customer needed.

I'm not sure either man knew he was teaching me a lesson. Instead, they set a standard for me to follow and created an atmosphere in which doing whatever it took was the norm. Perhaps most importantly, they also celebrated effort and helped build an environment in which going above and beyond for customers made you feel good.