Please ensure Javascript is enabled for purposes of website accessibility
Log In Help Join The Motley Fool
Free Article
Join Nearly 1 Million Premium Members And Get More In-Depth Stock Guidance and Research
By Daniel B. Kline – Apr 4, 2019 at 7:50AM

There are differences in perception.

The gender pay gap -- the difference in pay for equal work between men and women -- has shrunk. It has not, however, disappeared. When you compare male and female "workers of similar age, education, and experience," the pay gap comes in at men being paid 19.1% more than women, according to Glassdoor's Progress on the Gender Pay Gap: 2019 report.

That's an improvement over the 2016 version of the same report, but it's only one piece of the story. When you compare men and women who hold the same job title at the same employer in the same location, the pay gap drops to 4.9%. That's still a gap, but women making $0.951 for every dollar a man makes is dramatically better than the $0.79 women make for every dollar a man makes when you look at Glassdoor's overall data.

The pay gap has shrunk, and that's a positive. But men and women have different perceptions of the extent of the problem. 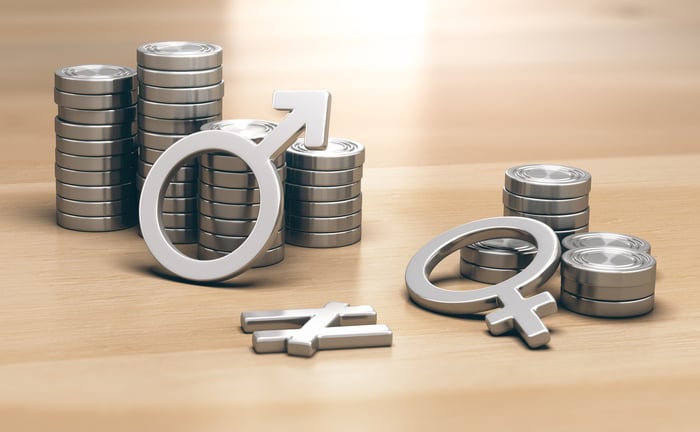 How does each gender see the pay gap?

Almost 9 in 10 workers (87%) believe men and women should be compensated equally for similar work and experience levels, according to a Glassdoor survey of 1,025 U.S. adults who are employed full or part time. About two-thirds of those surveyed (67%) believe the gender pay gap is a serious problem, but more women (78%) believe that than men (59%).

More men (80%) than women (68%) believe that companies offer equal pay for equal work. Across both genders, employees were split on who is responsible for closing the gender gap (with respondents able to vote for more than one choice).

Only 32% of employees believe that legislation is needed to close the gender pay gap. That's the same percentage that believes that new company policies could solve the problem.

One of the challenges for any worker is knowing what a job should pay. Nearly 7 in 10 (69%) wish "they had a better understanding of what fair market compensation for their position and skill set is at their company and in their local job market." Not knowing makes it hard to negotiate, and 39% of men and 42% of women accepted an initial salary offer without negotiating at all at their current job.

Over half of those surveyed (55%) said they feel as if they would have to switch companies to obtain a meaningful raise. Only 47% said their company openly discloses salaries internally among all employees. Two-thirds (68%) of respondents would be willing to share compensation info if they could do it anonymously, while 77% said that salary transparency is good for employee satisfaction.

As an individual worker, you have limited power to solve the gender pay gap. What you can do is enter into a salary negotiation armed with as much information as possible. That includes any personal research you can do, and it should involve using Glassdoor's salary reports and its salary calculator tool.

It's important to know that most initial offers are negotiable. That could involve asking for a higher salary or fighting for extra time off, location flexibility, or other perks. You may not succeed, but there's nothing wrong with asking -- and in this highly competitive market, you may have more leverage than you realize.