Please ensure Javascript is enabled for purposes of website accessibility
Log In Help Join The Motley Fool
Free Article Join Over 1 Million Premium Members And Get More In-Depth Stock Guidance and Research
By Maurie Backman - May 5, 2019 at 6:18AM

Here's some valuable advice from two people who know how to build a business.

As a seasoned entrepreneur, Daymond John knows a thing or two about building a successful business from the ground up. He's an investor on reality-TV show Shark Tank and the founder of hip-hop apparel company FUBU, but the most impressive thing about him isn't his multibillion-dollar empire. It's that he consistently lends his time to help budding business owners learn from his expertise.

Recently, John served as a mentor for the finalists of Bob Evans Farms' "Heroes to CEOs" grant-giving program, which offered military veteran entrepreneurs a shot at a $30,000 business grant, and the guidance he offered at that time was nothing short of invaluable to winner Jonathan Norton. Norton's company, Peak Safety Systems, produces safety equipment for military, first responders, and rope access professionals. It's a product line that's meaningful to Norton on many levels, and he's grateful to John for stepping in and helping him hone his winning pitch. 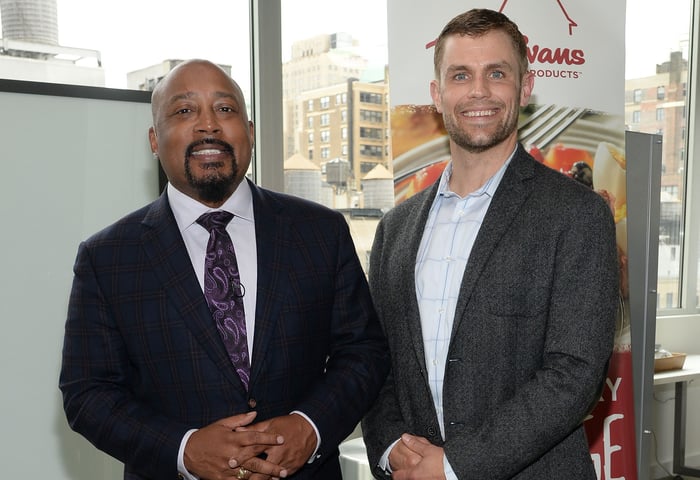 Following the contest, The Motley Fool spoke to both John and Norton about their experience, and they were good enough to share some tips on becoming a successful entrepreneur. If you're hoping to develop a thriving business, this is what you need to do to make it.

1. Be laser-focused and passionate

There's a reason Norton beat out over 200 business owners to win the "Heroes to CEOs" contest. As John put it, "Jonathan was laser-focused from the start." He came in with a strong business model, a clear strategy, and attainable goals. When you're starting a business, it's easy to get caught up in the excitement over a product you truly believe in, but you need to channel that energy so you're able to focus on the big picture. Norton is extremely passionate about his product because it can truly save lives, but at the same time, he was able to make a compelling business case for moving it forward.

2. Have experience with the product you're pitching

John and Norton both agree: You can't sell something you don't know. Norton's winning product, RopeSafe, is an edge protection system for load-bearing ropes and cables, and the idea for it arose when Norton came close to witnessing tragedy during an army training session gone awry. While it's certainly possible to learn your way around a new product or industry, it certainly helps to come in with a background in that field.

3. Be mindful of how you spend your money

John has seen many new businesses falter and eventually fail, and often, the reason has boiled down to money. "One common pitfall of entrepreneurs -- they overextend themselves financially," said John, so rather than go that route, aim to take affordable, strategic steps in building your business. Recognize that you're dealing with limited resources, and use them efficiently. At the same time, aim to scrounge up free or low-cost help during the early stages of your business. Ask people to donate their time to sit on your advisory board. Hire freelancers and virtual assistants to avoid a massive payroll you're locked into. And don't forget to tap your customers -- they're a valuable resource, and if you ask them for feedback, they're likely to give it for free.

The ability to roll with the punches is essential to succeeding in the business world. John recalled a pivotal time when FUBU was doing well, but he could tell that a strategic shift was in order. Fashion brands, as he put it, only stay hot for five to seven years, so John had to shift gears and move toward acquiring other brands. That willingness to refocus, however, is what helped his empire continue to thrive at a time when similar businesses would've struggled. Norton knows a thing or two about adaptability as well. As a former Army Ranger, he's used to thinking on his feet, and it's helped him get to where he is today.

5. Network as much as you can

If you want to build a successful business, networking is crucial. John suggests really getting out there when you're first starting out, whether it's going to trade shows, attending seminars, making connections online, or even showing up to random events, like meetups in bars, where an opportunity might present itself.

6. Have a little fear

A modest amount of fear is a good thing for a business owner to have, according to John and Norton, as it can help keep you focused. "When you're starting and running a business, you have to have a healthy level of paranoia," said John. He's grateful that he experienced this himself, because it ultimately changed the way he approached his business model for the better. Norton's experience has led him to the same conclusion. "Danger is believing your own story without getting grounded," he noted. "As they say in the army, complacency kills."