Dads often feel unable to take time off -- even when paternity leave is available.

Earlier this month at Women Deliver, one of the world's largest conferences on gender equality and women's rights, I was part of a team that made an announcement. The topic: paternity leave.

To some, that may seem surprising. Why talk about dads at a conference for women? The answer is simple. Supporting men as caregivers is a necessity for gender equality. 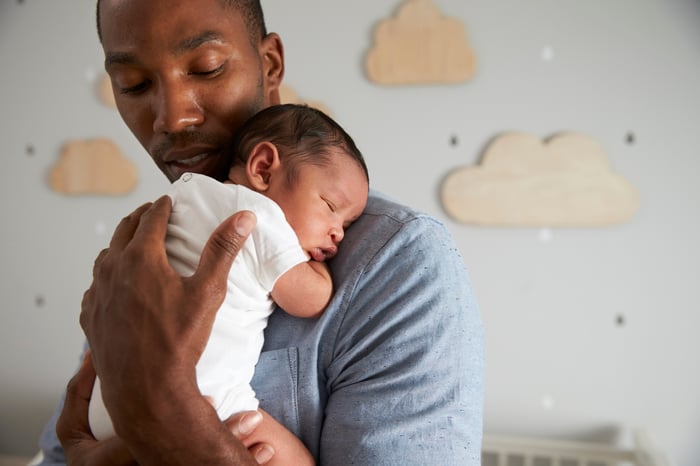 In the not too distant past, businesses were built on a Mad Men model. The presumption was that women will stay home and do all the caregiving, while men stay at work. That way of thinking helps explain why the United States still has no national paid maternity leave. The thought process behind it is that the man will make the money, while the woman stays home.

Unfortunately, the structures that keep those old ways in place, including workplace policies and cultures, still haven't been rectified.

Today, most businesses have some paid maternity leave, usually covered as disability leave following a birth. But despite some progress in recent years, only 29% of U.S. businesses offer paid paternity leave.

And while unlike the United States, virtually all other countries offer some paid maternity leave, fewer than half offer any paid paternity leave.

It gets worse. Even when paternity leave is available, numerous forces prevent men from being able to use it in its entirety.

This brings us to the Women Deliver conference, which took place in Vancouver. Dove Men+Care -- a company I partner with on this issue -- and Promundo released the State of the World's Fathers report, packed with data from interviews with more than 11,000 men and women. The findings show just how big a problem this is.

The overwhelming majority (85%) of fathers across seven countries want more time at home to care for their new children. But paternity leave often pays only a fraction of what men make at work -- and after welcoming a new child, families are particularly strapped financially. Forty percent of parents say financial barriers are the biggest impediment to paternity leave.

The stigmas against taking it are also powerful. Majorities of women and men say attitudes among colleagues and managers often leave dads feeling unable to take their paternity leave. This is a topic I covered in depth in my book, All In. Men have been fired, demoted, or lost job opportunities for taking paternity leave or requesting a flexible schedule.

I explored this in the wake of my own battle for fair parental leave. When my wife was pregnant with our third child, we determined that I'd be needed at home for caregiving after the birth. The policies I was under at CNN, part of Time Warner, allowed any parent 10 paid weeks after having a child -- except a biological father who had his baby the old fashioned way.

I challenged this internally. After our daughter was born prematurely in an emergency and work the company refused me the 10 paid weeks, I took legal action. Ultimately, the company revolutionized its policy, in a win-win for parents and for the company itself.

Businesses benefit from making paternity leave a reality -- not just officially in policy, but through a culture of supporting men in taking the leave. It's proven to attract and retain employees and increase gender equality in an organization. After all, as long as men are prevented from caregiving roles, those responsibilities will fall more on the shoulders of women. They're pushed to stay home more, while men are pushed to stay at work more, and the sexist cycle continues.

To help paternity leave become a norm at businesses everywhere, Dove Men+Care has partnered with Deloitte, Women Deliver and Promundo to create a Paternity Leave Global Task Force. Its aim is to "identify and promote solutions that will result in improved access and uptake of paternity leave for all men."

Announcing this plan at the conference, Women Deliver President and CEO Katja Iversen called the effort a "no brainer." Alan Jope, CEO of Unilever (Dove Men+Care's parent company) said the commitment to paternity leave is so important because "everybody wins -- moms win, dads win, and the kids win."

It's time to put the Mad Men era behind us once and for all. For that to happen, businesses must embrace modern fatherhood. Today's dads are as committed to caregiving as moms are. Let's make sure they get a chance to be there, from day one.