While 85% of fathers wish they could be more involved in the lives of their newborns during the early months, less than 50% of fathers take as much time as their country’s policy allows. This is often caused by social norms, financial pressures, and lack of support from their organizations.

While we hear a lot about women in the workplace, the rights and struggles of working fathers are far less discussed and advocated for. To celebrate this Father’s Day, I interviewed working fathers across North America to talk more about what being a working father in 2019 has been like for them. Here’s what they had to say! 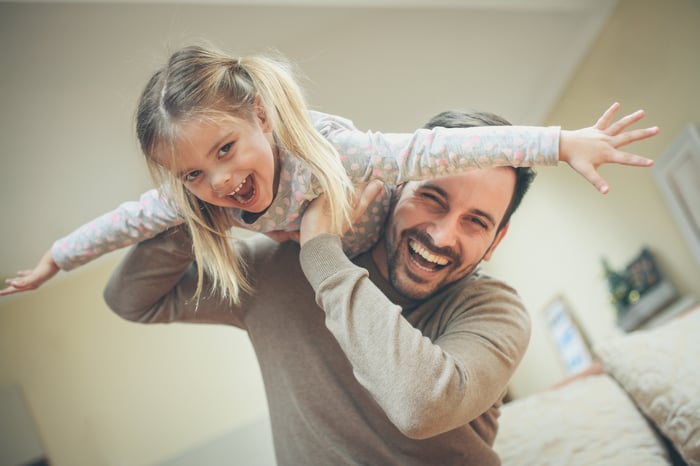 How do you feel your perspective on work-life balance has changed as a working parent?

When it comes to work-life balance, almost all working fathers emphasize the importance of time management. Parenthood has required them to make a mental shift toward being present with their families when they are not at work.

Marcus Yco, head of North America, Waze Local says, “My perspective on work-life balance has become clearer as a working parent. Needing to reprioritize and be thoughtful about this balance has helped me to become a better leader.”

Micheal Goldstein, chief revenue officer at Tucows, says, “Before kids, I was less disciplined and would procrastinate. Parenthood is a lesson in time management that everyone can benefit from. If you say you’re going to stop working at 6:00 pm, you’ll find a way to do it if you work with intention. I’ve had to learn to be unapologetic about my schedule and boundaries. My goal is to only do one job at the time so I can give my kids my full attention. ”

Dan Capoferri, senior manager at Tucows, recalls that,"Years ago, when I saw the parents at work leaving earlier to pick their children up from daycare, I thought it was unfair. After having kids of my own, I completely understand and empathize with them. Now, I strive to produce as much as I can within my allocated working hours, but disconnect from work completely when I’m home. I can still progress my career during my normal working hours without having to work constantly on evenings or weekends."

As a new father, do you feel that any of your work habits or routines have had to change?

Yco says that “Many things will change when you become a new father! Before I had children, I routinely worked evenings and weekends. Even after our first was born, I would leave for work before she woke up and come home well after she had gone to sleep. I realized I was missing out on my daughter’s life entirely and needed to reprioritize around my new family. Now I own mornings with my kids. I make sure that I come home before they go to bed so that I can say goodnight and spend a few hours with my wife.”

Capoferri says that having kids has also helped him realize his potential for getting things done within working hours. He says, “I know that when I go home my phone is locked away in my bedroom and I’m spending time with my family. I need to accomplish all of my work before leaving the office. This has led me to become more productive, and has been an excellent upgrade."

While these fathers seemed to have found a healthy balance, 63% of fathers feel they spend too little time with their children, compared to 35% of mothers who felt the same.

What mental hurdles or challenges do you face as a working father?

Women often feel guilt around falling short in the many roles they take on. This is no unique feeling, as men express similar concerns. Goldstein says that he too has experienced times when he felt like he was doing everything inadequately. He says, “Comparing yourself as a parental unit to other parents is hard, especially when you’re both working and other parents are not. You feel like others are doing it better and are way ahead. As parents, there is implicit judgment from all ends.”

Saad Bellafquih, founder and manager of a management consulting firm, says that while he sees improvements in societal expectations and standards, he doesn’t feel like there is full equality yet, especially with “the perception of a man taking time off to take care of their family.”

Alan Zel, president and CEO of Zel Human Capital, says, “We have redefined what it means to have it all. Men can suffer from feeling like they have missed out on raising their children because they had to work.”

Bellafquih explains that whether you are the mother, or the father, you have the same 24 hours in a day, and whatever area you put focus on will force you to sacrifice elsewhere. He says, "What’s important is to acknowledge that the path we choose is our own.”

In regard to taking time off for paternity leave, Capoferri says, “I felt as though people were looking at me "sideways," wondering why I deserved to take time off…even going as far as to comment '…if working dads can take time off for paternity leave, what about those who choose not to have children?' People would make me feel that this time away with my family was undeserved.”

While today’s fathers aspire to be more involved with their families than ever before, men who interrupt their employment for family reasons earn significantly less after returning to work. While today’s fathers spend three times as much time with their children and twice as much time on housework than previous generations, the stigma still exists.

How can you help your spouse with their career?

When it comes to supporting their spouses, Zel says to “listen, observe, and don’t make assumptions about what your partner needs. Ask questions and try to really understand and hear what their experience is like!”

Yco says, “I am incredibly lucky to have a partner that I can talk through my career with. My wife is an equal in decision-making when it comes to my career and how it may impact our family. Tactically, taking on more at home in spurts allows us each enough coverage when career responsibilities spill into the home/family routine.”

Goldstein says, “Constant communication, and taking as much pride and being invested in their career as you are your own is important. When you can help your spouse’s career, that should feel like a win in your career, because you’re a team.”

Capoferri says, “Give them breaks when they need them. Giving your spouse time to themselves to unwind and focus on something other than children is one of the greatest gifts you can provide.”

What they all agreed on was that parenting is a team effort, in which both parents must share the responsibilities. With Father's Day upon us, make sure you give thanks to your working fathers for all their support and sacrifices!

[In part two of this article, we’ll discuss what it was like for fathers to take their paternity leaves, and what organizations can do to help make things easier for working parents.]