Please ensure Javascript is enabled for purposes of website accessibility
Log In Help Join The Motley Fool
Free Article Join Over 1 Million Premium Members And Get More In-Depth Stock Guidance and Research
By InHerSight - Feb 29, 2020 at 9:00AM

Breaking jobs down into small tasks can help.

Everybody procrastinates -- at home, at school, at work. And apparently we do it most in January and February, according to research, getting just over 7% of stuff done.

Contrary to popular opinion, however, we don't procrastinate because we're lazy. In fact, it's not even our fault. 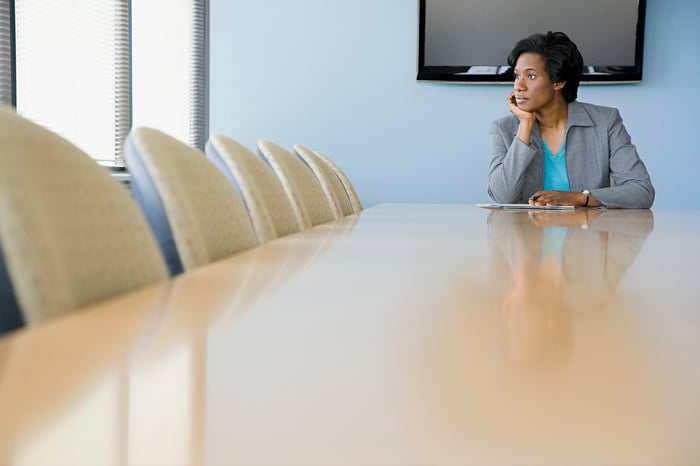 Immediate gratification was necessary for our ancestors to survive: They had to prioritize hunting and gathering for survival. "They couldn't allocate attention to activities that may delay rewards, such as storing food for a rainy day or practicing correct leaf-picking techniques." In other words, if our ancestors hadn't been masters of procrastination (hunt first, clean later), we wouldn't be here.

So, what's wrong with procrastination?

There are costs to procrastination.

Jobs and assignments don't get done properly or on time or at all. Bills aren't paid and chores pile up. People who chronically procrastinate are seen as unreliable and lazy; their self-esteem can be negatively affected, which can impact both professional and personal relationships.

Consultant Lynn DelGaudio says procrastination is expensive, too: "For businesses, it's been referred to as 'the silent killer.' Per one study, the average employee procrastinates two-plus hours per day. Financially, that translates to about $11,000 per employee -- per day -- conservatively."

How to stop being a procrastinator

If you remember that our brains seek immediate reward, then it's not hard to understand why we put off tasks that are difficult to do or unpleasant or just plain boring. Especially today, when we have a million pleasurable distractions literally at our fingertips. It's actually amazing we get anything done.

Obviously, though, we need to get stuff done, and there are ways we can make our brains get to work. Here's how to go from procrastinating to getting it done.

Some tasks will never be fun or exciting. That doesn't mean they're not valuable or necessary. If you can focus on how the finished product benefits you or the company, instead of how boring it is, you can gain a more positive outlook.

Also, give yourself a reward upon completion of a job well done. Make it something you really value so that it means a lot and is an actual motivator.

Reduce the task into its smallest components so that it's not an overwhelming wall of work. It's much easier to put off starting a 30-page report than emailing a source for a quote. You can use quick to-do items as a warm-up. When you get to the substance of the job, work in focused sprints with scheduled breaks. This approach is called the pomodoro technique, and it can be tweaked to work for any situation.

If your to-do list is several pages long, you'll probably ignore it. You should have only a couple of major items on your to-do list, and these should be non-negotiable, important tasks. If you've got three items in your calendar (meeting, sales call, interview), you can check off each as completed. Secondary items (like the subtasks for that big report) can be fitted between the prioritized tasks, and some of those you may be able to delegate.

Do the hard stuff first

You know the relief of successfully completing a difficult job. There's an immediate reduction in stress that everyone in the workplace feels. When another hard task needs to be tackled, try to recall that feeling so that you can tackle the job without putting it off. Use whatever works: Divide it into smaller tasks, take breaks (as in the pomodoro technique), and promise yourself a reward at completion.

If you're having trouble starting any task, easy or difficult, pushing through on the quickest, simplest one will give you the momentum you need to continue. Start the project with whatever step is most straightforward, like emailing requests for bids or scheduling a vendor meeting. Responses to those will force you to take next steps, something that wouldn't have happened if you didn't just start.

External pressure can work to your advantage. If you're part of a team, commit to reporting incrementally as the project progresses. When you have targets to meet and colleagues are waiting for results, this will override any procrastinating on your part. The same idea applies when you're working solo: Make yourself accountable by creating deadlines for progress reports to your superior.

Make a routine to keep you moving

When a behavior becomes a habit, procrastination is less of a problem. So, if you set aside an hour a day to do a specific task and you do that long enough, it'll become a standard part of your day. Schedule the time of day you know you're at your best for focusing on difficult tasks so that you're not fighting fatigue in addition to procrastination. Use whatever techniques necessary to maintain the schedule until it becomes a routine.

Do one thing at a time

Multitasking is not your friend. Focusing on one task at a time is better than trying to do several things at once. Dave Crenshaw, author of The Myth of Multitasking, puts it this way: "When you segment your attention in all these different directions, what happens is things take longer than...if you did one thing at a time." It's your brain switching between tasks that's the problem, he explains. "Every transition, you have to pay the price for it and the prices that you pay are things take longer, you make more mistakes and you increase your stress levels."

It's OK to complete several disparate small tasks to give you momentum to overcome procrastination. But if you try to multitask, working on different things at the same time, you'll just be adding a new layer of problems.

Give the perfectionist in you a break

Many people who procrastinate are perfectionists -- they won't hand in a project until it's perfect. That approach can be paralyzing, leading them to never complete work on time. Certainly allow time at the end of a report or other task for review and revision. In fact, feedback is one of the reasons progress reports can be useful.

Still, a firm deadline for final submission is necessary. Handing in a project on which you know you've done your best is certainly better than applying for multiple deadline extensions.