Please ensure Javascript is enabled for purposes of website accessibility
Log In Help Join The Motley Fool
Free Article Join Over 1 Million Premium Members And Get More In-Depth Stock Guidance and Research
By InHerSight – Apr 19, 2020 at 9:30AM

We outline trends we’re seeing and how they’re impacting you.

As the coronavirus outbreak continues to disrupt our lives and workplaces, companies are facing an unprecedented challenge: How can they keep their businesses afloat during a global health crisis while also supporting their workforce? There is no playbook for this.

Many business leaders are marking hard, often personal business decisions in order to weather the storm, and as unemployment numbers grow every day, it's becoming very clear how damaging the pandemic may be to our economy. 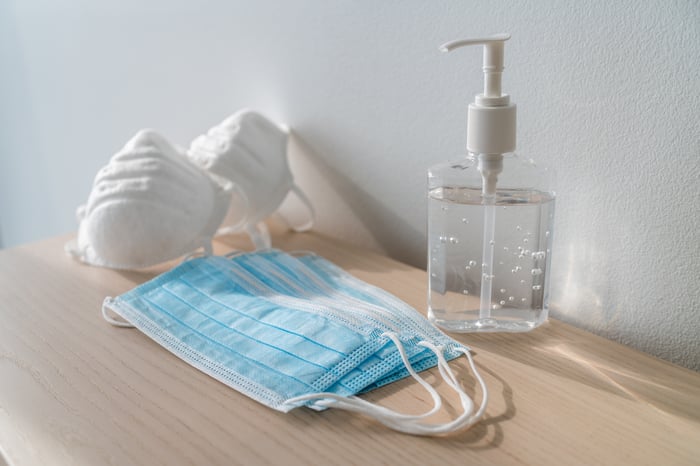 Yet amid all of the chaos, there are a few trends emerging from company responses to coronavirus that are, at least in spirit, positive. We're talking moves like Spanx donating $5 million to female entrepreneurs; Delta Air Lines donating 200,000 pounds of airline food, which would have gone uneaten, to hospitals and community food banks; and Johnson & Johnson ramping up global production to supply 1 billion vaccines worldwide.

These are the three biggest changes we're seeing to company policies and product lines right now in response to COVID-19.

Essential workers, such as grocery store clerks, are vital to our survival, but many come from industries with the least pay and fewest benefits -- paid sick leave being one of the missing cogs in that machine. According to the U.S. Department of Labor, four in 10 hourly workers didn't have paid sick leave before coronavirus.

That number has definitely changed since the start of the pandemic, with companies like Walmart, Trader Joe's, Instacart, Darden Restaurants (owner of Olive Garden and Longhorn Steakhouse, among other brands), Target, Amazon.com, Lowe's, McDonald's, and others expanding their benefits to encourage part-time workers to take time off when they're sick. Many have also opted to give employees "hazard pay," or increased wages because of the danger they're putting themselves in during the pandemic.

Here, Business Insider details 22 companies changing their benefits and policies in response to coronavirus. The number of employers following suit continues to grow, but whether new policies are being implemented is another story -- and one we don't want to gloss over. Notably, Amazon workers in Chicago walked out because their employer failed to close the facility for sanitization after someone tested positive for COVID-19.

If you work for an organization that's updated its benefits in response to coronavirus, you should rate your company on InHerSight (or rate it again) to reflect the effectiveness of new policies.

A number of CEOs and top business execs are donating their salaries to support people in need. Jack Dorsey, the chief executive of Twitter and Square, pledged $1 billion of his own money, or about a third of his total wealth, to relief programs related to the coronavirus.

NBCUniversal CEO Jeff Shell and other CEOs in the Comcast "family" are donating their salaries to charities engaged in coronavirus relief until the virus is gone, and Texas Roadhouse CEO W. Kent Taylor has given up his base salary in order to pay the company's frontline workers during the pandemic. Walt Disney Company CEO Bob Iger announced he'll forgo the salary he would have received last year as the chief exec to help cover staff wages. The rest of the Disney leadership team is taking 10% to 30% pay cuts.

We're all in this together, and as part of our efforts to manage expenses, the Senior Leadership Team have also volunteered to reduce their salaries by 20% for the next three months. In addition, all members of our Board of Directors have agreed to forgo their compensation for the same time period. The savings from these actions will go toward launching our We Stand Together fund in mid-April, which is aimed at assisting team members who face challenges caused by the current COVID crisis. You will hear more about this soon.

However, it would be an oversight entirely to talk about C-suite executives and fail to mention how reductions in pay are also affecting everyday employees. Companies like Tesla, SoulCycle, and Boston Scientific are cutting salaries and furloughing workers across the board to reduce company costs, as are a host of media organizations around the country. Some healthcare workers are even faced with layoffs and pay cuts.

The reductions in pay aren't necessarily small, either. Los Angeles copywriter Laura Cohn told Marketplace that she's taking a 30% pay cut: "To at least be working a little bit and to have a small amount of income coming in is better than nothing," she says.

Producing the goods we need

Hand sanitizer, masks, scrubs, ventilators -- companies all over the world are scrapping their product lines to help meet the needs of our communities and healthcare workers.

In the cosmetics industry, many companies have begun producing hand sanitizer instead of their signature products during this time. The trend started with LVMH deciding to produce hydroalcoholic gel in the plants where it would normally produce Dior and Givenchy perfumes, then Coty Inc., L'Oréal, and Estee Lauder cottoned on. Said the company when it decided to make the leap: "The Estee Lauder Companies is proud to contribute to the broader COVID-19 relief efforts by reopening our Melville manufacturing facility this week to produce hand sanitizer for high-need groups and populations, including front-line medical staff." The factory is located in Long Island, New York.

Alcohol brands such as Pernod Ricard (of Absolut vodka and Jameson Irish Whiskey) and Anheuser-Busch, as well as local and regional brewers, winemakers, and distillers, are also now producing sanitizer.

Mass-market clothier H&M is working hard to supply more surgical garments, and Crocs is donating a free pair of their shoes to all healthcare workers. Designers Brandon Maxwell and Christian Siriano are using their staff to produce face masks and gowns, and Prada is making 80,000 hospital gowns and 110,000 masks for healthcare professionals. General Motors is also working to produce 50,000 face masks per day.

As for ventilators and other protective equipment, Ford Motor Company, General Electric, and 3M have partnered to produce just that. Dyson has also promised to produce 10,000 ventilators and donate another 5,000, and General Motors, again, has joined forces with a company called Ventec Life Systems to build ventilators in its car factories.