Please ensure Javascript is enabled for purposes of website accessibility
Log In Help Join The Motley Fool
Free Article Join Over 1 Million Premium Members And Get More In-Depth Stock Guidance and Research
By InHerSight – May 23, 2020 at 8:00AM

Successful managers are ultimately measured by the bottom line, with management and productivity inextricably intertwined. In fact, studies show that for every 0.1% improvement in effective management, productivity goes up by 10%. Employees agree, according to the Society for Human Resource Management (SHRM), with 58% reporting that "poor management is the biggest thing getting in the way of productivity."

How can new managers lead their teams effectively? What qualities of good leadership and management styles should they employ and what are some things they should definitely avoid?

We all know the bosses from hell: the ones that scream, cast blame, take credit, and are just plain mean. The one good thing about a bad boss is that they're a great example of what you don't want to be when you take the position as team leader or department head.

In order to be a successful manager, it's important that you have a high degree of emotional intelligence. Not only will you be self-aware and able to manage your own behaviors, but you'll have great people skills and will know how to work well with a team. That's crucial when you're inspiring others to perform their best.

In her video, leadership coach Makeda Andrews says it's important for new managers to do more listening than talking -- simply because they don't "have all the answers on the first day." She calls this approach focusing outward, paying attention to the team and process, before coming up with ideas and changes you'd like implemented.

Leadership coach Bernd Geropp says the timeline for your new management job orientation is about four to six weeks. It's then that you begin to understand the company culture, the team members, and your own role and what is expected of you. He recommends patience when it comes to making changes because you don't yet know the full extent of existing power relations. Also, rules that seem pointless now might make sense in time. Understand first, he advises, and "only make far-reaching decisions if you can really assess what impact they will have." 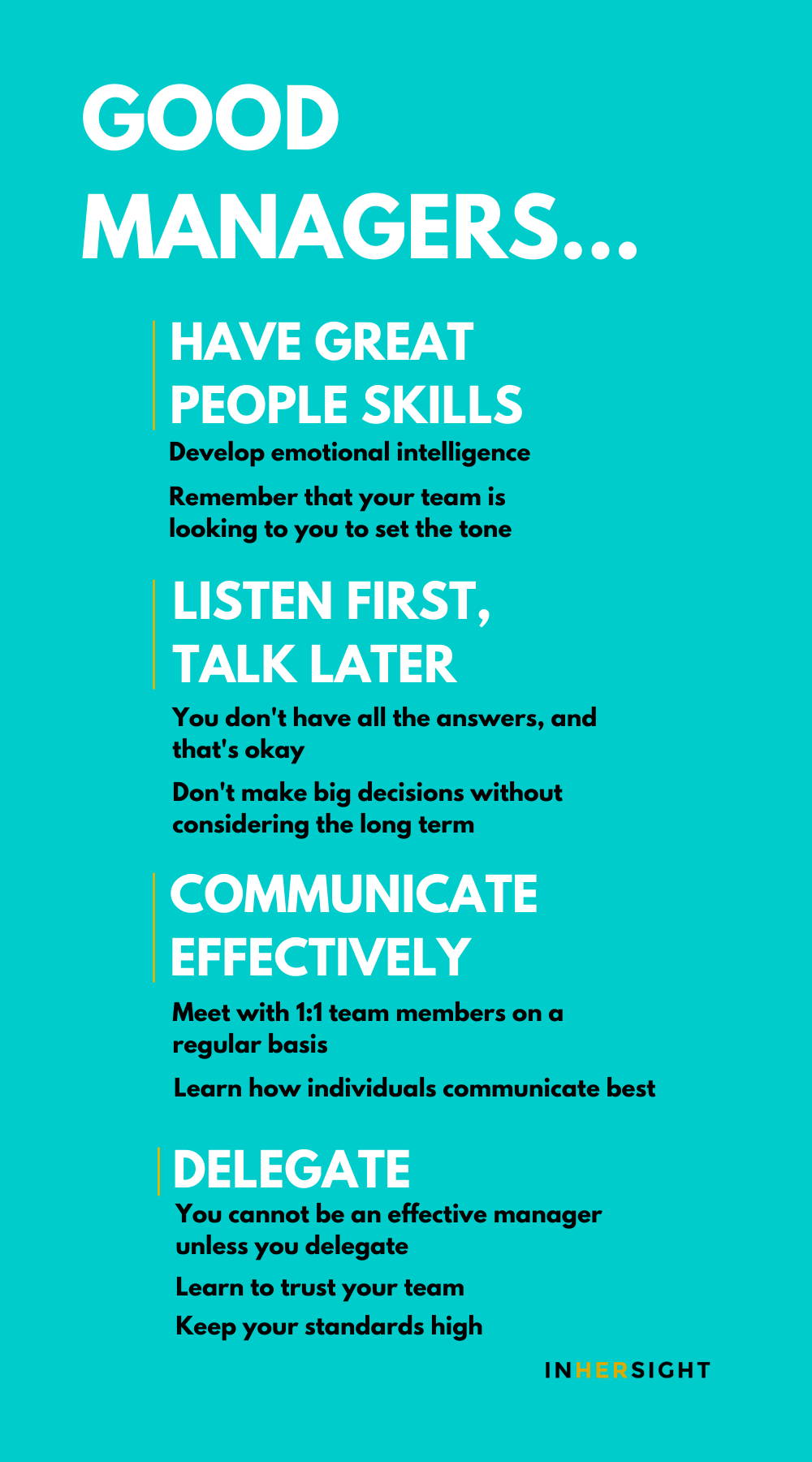 To lead, you need to communicate from the outset. That means taking the lead with introductions during the first few days, speaking to each team member individually and then everyone as a group. Find out what they do, what processes they say work well and what they'd like to see improved. Ask things like whether they prefer texts or in-person meetings ,and if they're morning-people or work better later in the day.

Use that information when setting a strategy and vision for the team, then communicate it to all team members by way of a full team meeting, supported by confirmation emails and one-on-one meetings for detailed explanations.

Use whatever format you need to in order to be clear.

As David Edery, CEO of the game development studio Spry Fox, puts it: "If I could give you all just one tip, it is this: Remember that most people consistently, severely overestimate their ability to communicate clearly in text. Misunderstandings increase. Feelings get hurt more easily. A good manager knows when to prod people into video chats." (Or face-to-face meetings -- whatever the case may be.)

A good manager is a guide, empowering team members to take the initiative on solving problems. Leaders who delegate tasks are telling their teams that they trust them to do that job. This not only motivates employees, but allows them to develop skills and builds capacity across the department you're managing.

Adam Zbar, founder of meal delivery service Sun Basket, says managers should "solve the people, not the problem." In other words, team leaders should not always be the problem-solver, but instead guide their team members to the solution by asking questions. Be honest, too. If you don't have the solution, tell your team that. Working together to come up with a way forward allows employees to become self-directed and much more engaged in their work.

Being a manager isn't a popularity contest. You're not leading friends, but subordinates -- and to do that effectively, you must be respected by those employees.

For example, when talking to new kitchen managers, restaurant coach Ryan Gromfin tells them to keep standards high. New managers have a tendency to lower their standards in order to make friends with staff. They'll dismiss a task done incorrectly with a laugh: "That's OK, you'll do better next time." But that's not how you earn respect, says Gromfin. Keep your standards high, and even raise them. Be strict without being mean.

Of course, respect goes both ways, and in order to be effective, managers need to respect their team members. Jane Perdue, executive director of the professional development firm The Jane Group, says you have to "manage results and relationships for both short-term and long-term success. People who feel unvalued and disrespected don't consistently deliver the best results. Let's always bring connection and empathy to our interactions, even when we're building the budget or looking to best the competition."