One of the most important factors when you're planning to buy a home is what mortgage rate you'll have to pay to get a home loan. Over the past several years, home buyers have benefited from some of the lowest mortgage rates in decades, with prevailing mortgage rate trends having pointed downward ever since the end of the housing boom in the mid-2000s. But about a year ago, those mortgage rate trends encountered a key reversal, and even though home-loan borrowers have gotten a bit of relief more recently, most market participants remain convinced that future mortgage rate trends will make borrowing less affordable for U.S. home buyers. Here are three reasons why.

1. The Federal Reserve isn't supporting low mortgage rates as much as it used to.
One major factor that helped prolong downward mortgage rate trends over the past several years was the Federal Reserve's quantitative easing program. Starting in November 2008, the Fed started buying mortgage-backed securities, and a further round of bond buying that started in late 2012 involved $40 billion in monthly purchases of mortgage-backed bonds. 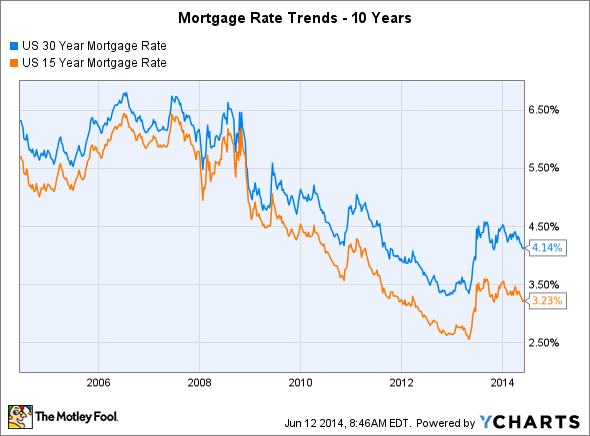 Yet as you can see in the chart above, mortgage rate trends reversed in mid-2013, and that corresponded with comments from former Fed Chairman Ben Bernanke that the central bank would start tapering its quantitative easing activity as the economy improved. Just the threat of an end to bond buying sent mortgage rates up a full percentage point. Beginning last December, the Fed has reduced its monthly purchases of mortgage bonds from $40 billion to $20 billion as of last month, and many expect further reductions in future meetings.

With the Fed's purpose in buying mortgage bonds having been to keep rates low, pulling back will likely create upward mortgage rate trends that will make borrowing more expensive for home buyers. Rates are still low by historical standards, but rising rates will still threaten home affordability for many would-be buyers.

2. Economic conditions look poised to improve.
Another thing that establishes mortgage rate trends and interest rates in general is the health of the economy, and right now, prospects for economic growth look good. Even after a tough winter in which many companies reported slowdowns, the Conference Board's Leading Economic Index has climbed almost 3% in the past six months. In particular, building permits contributed substantially to the recent gains, accounting for a quarter-percent boost in the LEI in April alone.

Mortgage rates don't always track the health of the economy. But with the Fed having based its zero-interest rate policy on economic sluggishness, a recovery is clearly what the central bank is looking for. Improving economic conditions will likely turn mortgage rate trends higher.

3. Uncertainty in the mortgage market could disrupt financing.
For years, government-sponsored enterprises Fannie Mae (OTC:FNMA) and Freddie Mac (OTC:FMCC) have helped create a liquid mortgage market, supporting mortgage rate trends toward lower rates by buying mortgages that banks originate and packaging them into mortgage-backed securities. But since 2008, Fannie Mae and Freddie Mac have been in conservatorship, and the federal government is looking at winding the two hybrid entities down.

Prominent hedge fund investors have challenged the government's efforts, urging that Fannie Mae and Freddie Mac should be privatized rather than allowed to disappear. For now, though, the government seems to be encouraging private competition by raising the fees Fannie Mae and Freddie Mac charge. Higher fees mean higher mortgage costs for consumers, and until private competition emerges, the result could be less liquid mortgage markets that lead to upward mortgage rate trends.

Think long term
No matter what happens in the short run, mortgage rate trends look like they'll point upward, at least as long as the economy keeps improving. As a result, if you're thinking about buying a home, doing so sooner rather than later could get you cheaper financing than you're likely to see in the future.