It can be easy, when you're thinking about how to get out of debt, to feel like it's all but impossible. After all, you might owe $5,000 and be earning close to minimum wage. You might earn more but owe $20,000 -- a formidable sum. But don't despair: Getting out of debt can be difficult, but it's far from impossible. Many folks have shared with us how they've dug themselves out from under debt loads ranging from $22,000 to $140,000!

About seven years ago I collected some inspiring stories from people posting on our Credit Cards and Consumer Debt discussion board about how they paid off some massive sums. Four years ago, I revisited the topic and offered tips and observations from more former debtors. (One fellow noted that when he reviewed all his records, he discovered that while in debt, he forked over $193,345.59 in interest alone!) 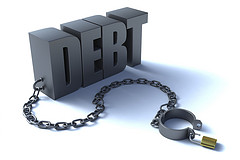 Be strategic
So how can you go about getting out of debt? Well, first, stop adding to your debt. Studies have shown that we tend to spend less when we use cash, so just rid yourself of the temptation of plastic. If you don't want to cut up your cards, you might freeze them -- literally, in water -- and keep them unavailable that way.

Have a strategic plan. There are two opposing schools of thought on which debts to pay down first. Let's first assume you owe money to a handful of creditors and that your obligations range from small to large sums and have low and high interest rates. One strategy is to pay off your smallest debts first simply to reduce the number of accounts you're paying off and to give you an early sense of accomplishment. That's fine, but the more cost-effective strategy is to pay down your highest-interest-rate debt first, because that's what costs you the most.

Realize, too, that racking up interest is kind of like investing in reverse. Instead of earning a certain percentage on your investments, you're paying that to your creditors. Paying down high-interest-rate debt is, in a sense, like earning a good return on your investment. Think of it this way: If you pay off $1,000 on which you're being charged 20% per year in interest (and many people have credit card debt at even higher rates), then you're saving yourself $200 in interest payments per year; that's basically a 20% annualized return, which many stock investors can only dream of.

Tried-and-true tips
Our Credit Cards and Consumer Debt discussion board features lots of advice offered by successful debt-retirers. Below are a few you might consider, some more powerful than others. Visit the board for more ideas and support.

First off, if you're in a long-term relationship, be sure to be on the same page as your partner, with both parties committed to paying down debt. Both of you should understand that for maximum effect, you'll need to tackle the problem aggressively -- for example, by getting one or more part-time jobs, if possible. Smaller moves can be powerful, too, especially when added together. You can switch to a less expensive phone plan, and you might cut the cord with your cable provider. (Increasing numbers of people are finding that streaming services more than make up for the loss of cable TV.) You might bid adieu to your landscaper and mow your own lawn. If you have a costly hobby, such as golf, you might forgo it for a year -- saving $50 per week on golf or other entertainment can net you $2,600 in a year. Similarly, curtailing eating out can save thousands, and quitting smoking is a great long-term money-saver.

Our board denizens' stories make clear the importance of being patient, because it can take a year or several years to pay down a lot of debt. They also develop wealth-building habits along the way, eventually transitioning from debt repayment to investing, putting that same amount of money into emergency funds and retirement accounts instead of creditors' pockets. In essence, they learn to live below their means and invest in their future.

Finally, for some recent inspiring examples of how to get out of debt, read up on how one household had more than $100,000 of debt and cut that by more than 50% in about a year, and how someone with about $21,600 of debt cut that in half in even shorter order.

As their stories attest, it may not always be easy, but it's definitely possible to pay off a lot of debt and to turn your financial life around.

How to Get Out of Debt: Lessons From People Who Paid Off $100,000 @themotleyfool #stocks Next Article
Current