Please ensure Javascript is enabled for purposes of website accessibility
Log In Help Join The Motley Fool
Free Article Join Over 1 Million Premium Members And Get More In-Depth Stock Guidance and Research
By Maurie Backman - Apr 16, 2017 at 5:41AM

Your credit score can impact your finances in more ways than you might realize. For example, did you know that having poor credit might impede your ability to get a job? The more you understand about credit scores and how they work, the better equipped you'll be to build yours up. With that in mind, here are eight facts about credit scores you probably didn't know.

1. The average credit score in the United States is currently 695

The good news here is that 695 actually represents an all-time high. It also marks a nice increase from 2005, when the average credit score was just 688. That said, 695 is considered an average or fair score, not a great one. An excellent score, by contrast, is one that's 720 or above. 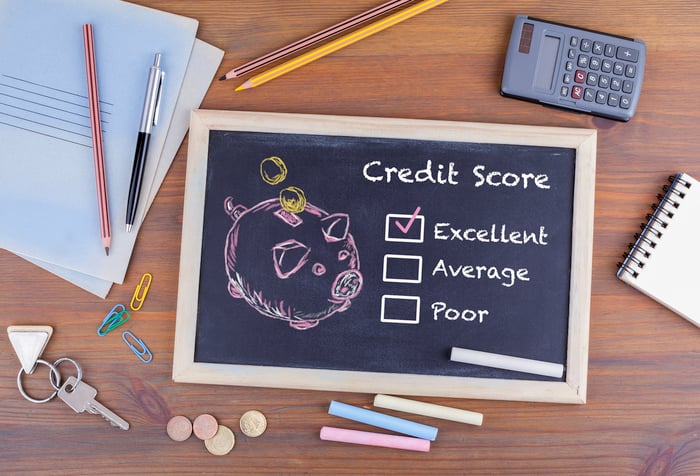 2. Among all age groups, 30- to 39-year-olds are the most likely to have the lowest credit scores

You'd think that 20-somethings would have the lowest credit scores among all age groups, but it's actually 30-somethings who get that less-than-stellar distinction. While it's true that younger Americans have the shortest credit histories, those in their 30s face a host of expenses (think mortgages, auto loans, and wedding debt) that often come together to damage their scores.

According to the Federal Trade Commission, one in five credit reports contains errors. These include identity errors, duplicate accounts, and inaccurate payment records. It's these discrepancies, however, that can cause consumers to pay more for mortgages, auto loans, and even insurance.

4. But 80% of consumers who dispute credit report errors get results

Of those who reported errors on their credit reports, 80% experienced some sort of modification. The Fair Credit Reporting Act dictates that credit bureaus are required to review and respond to disputes within 30 days, or otherwise remove any data that can be construed as negative. If you spot a mistake on your credit report, it's in your best interest to speak up.

5. An estimated 16% of Americans have never checked their credit reports at all

In light of the above, it's clear that up to 16% of consumers are making a major credit-related mistake. Furthermore, WalletHub reported earlier this year that 37% of Americans haven't checked their credit reports in at least a year. The sooner you identify credit report errors, the better your chances of seeing your score increase quickly. You're entitled to a free credit report each year, so it pays to request yours online and study it for mistakes.

6. About 45 million Americans have no credit score

One out of every 10 Americans doesn't have enough of a credit history to establish a score. Not surprisingly, younger adults are most likely to be missing a credit score; over 80% of 18- and 19-year-olds don't have one.

7. Your credit score can vary by bureau

Believe it or not, each of the three major credit bureaus -- Experian, TransUnion and Equifax -- has its own method of producing a credit score. As such, it's possible for your score to vary considerably from one bureau to the next. That's why it's important to review your credit report from each individual bureau and make sure its data is consistent.

8. Only 0.5% of consumers have perfect credit

While you don't necessarily need perfect credit to get approved for a loan, having the highest possible score can benefit you in more ways than one. Not only will it make you more likely to snag the most favorable rates available, but if you encounter a situation where, say, you're vying for an apartment among several other applications, your perfect credit score might set you apart from the pack. Though only an elite few manage to hit that 850 target, you can achieve credit perfection by establishing a solid history, always paying your bills in full and on time, monitoring your credit report for errors, and never using more than 30% of your available credit at any given point in time.

You never know when you might need a new credit card or loan. The better your credit, the more financial flexibility you'll have in life, so it pays to take steps to improve your score.