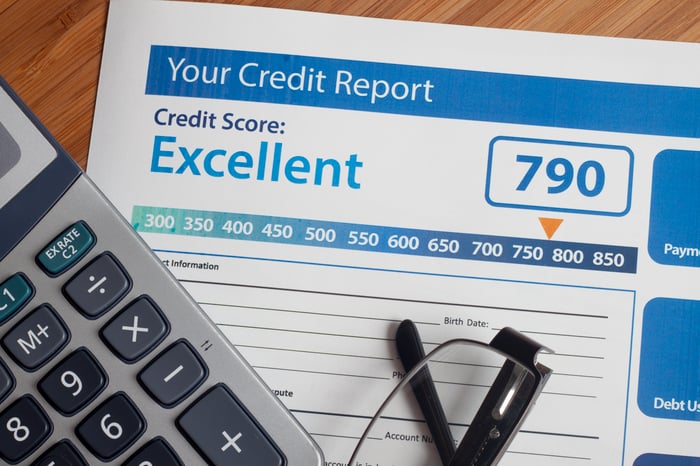 The major pillars of credit scoring models are easily accessible online but many Americans still find themselves wondering what exactly influences their credit scores. Perhaps this is a matter of information overflow, or perhaps, conflicting information.

In the video segment below, The Motley Fool analysts Michael Douglass and Nathan Hamilton talk more about credit scores by highlighting three things that aren't counted in your credit score.

Douglass: Whether you pay your loans on time, also how much of your available credit that you're using but I think there are a lot of misconceptions out there about the things that you don't cover, that aren't a part of that credit score. Let's talk about those real quick.

Douglass: Which you can do once a year, right?

Hamilton: Yeah, you can do it free. Your credit score isn't going to be impacted by that actual inquiry.

Douglass: Right. It should be. It would be great if it were benefited but, you know ...

Hamilton: I know, if you think about it, it's actually a credit score savvy behavior because if you are checking, you are caring about it, you realize the importance of it.

Hamilton: Yeah, credit card pre approvals. There is not an official hard inquiry from the bank to check your credit score. So, if you get an offer in the mail that says you're pre-approved or you go online to fill out a pre-approval form, it's not officially pulling a hard inquiry and at that point your credit score's not going to be impacted. The reason this matters is because if you look at FICO scoring models, the number of inquiries, hard inquiries, does draw down your credit score in the near term. So, it is something important and differentiate the two.

Douglass: Absolutely. Also, paying utility bills on time and your cellphone bills, too.

Hamilton: It's important to realize the very small print in this instance which is on time. If you're paying on time, nothing is reported to the credit bureaus. Your FICO score is not impacted by that, but if you miss and don't pay on time, there are instances where that is going to be reported and it does impact your credit score.

Douglass: If you're late enough, you end up going to collections. They sic a debt hound on you.

Hamilton: They come knocking on your door.

Douglass: Yeah, exactly. Not a fun experience, I'm sure. As we talked about at the top, one of the big things to think about with your credit score in general is utilization. Basically, what percent of the available debt you have you're using. If you have a $2,000 credit card limit and you're spending $200 a month on your credit card, then you have a 10% utilization.

Douglass: The lower the score the better, although you want to be above zero. They want to know that you're using credit and using it responsibly. Not that you're just completely credit-less.

Hamilton: Yeah, if you look at it, credit utilization specifically accounts for 30% of your FICO score.

Douglass: It's one of your big opportunities to really raise it quickly.

Douglass: Cool. We've got a lot more tips on your credit score and on credit cards including the best credit cards of 2017 at fool.com/creditcards, so check us out there. Thanks.