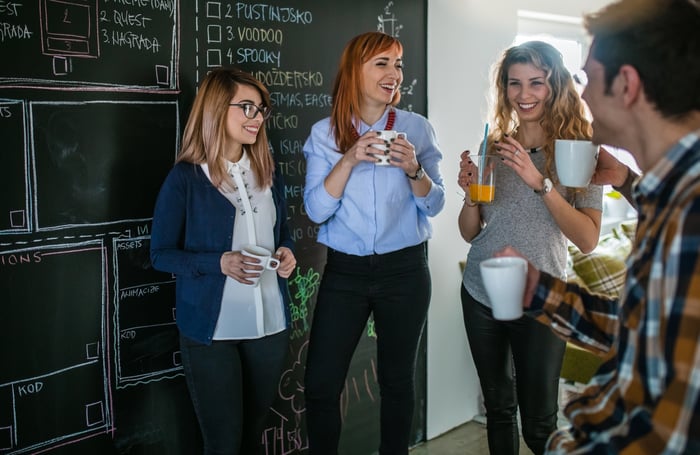 As time passes, each generation adapts to its surroundings, leading to persistent change, generation after generation. But what does this mean for generational differences when it comes to finances, specifically credit cards?

In the video segment below, The Motley Fool analysts (and millenials themselves) discuss recent research that attempts to understand how millenials relationships with credit compare to other generations.

Michael Douglass: So, Hamilton, as a Millennial, whenever I hear "millennial" or something about millennials, I immediately sort of cringe, like, "Oh, gosh ..." What are people going to be saying now? But it was interesting because according to a recent bank rate study, older Millennials, so folks age 27 to 36, are using their credit cards in ways reasonably similar to Gen Xers, which are roughly folks age 37 to 52.

Douglass: Really interesting that you actually saw some sort of similarities between the two different generations.

Hamilton: Yeah, because you would think if you apply labels to any sort of generation some people would say that Millennials are spenders or don't maintain their budgets well. That may be the case, broadly speaking, but in this particular research bank rate found that 61% of Millennials are using credit cards and that's a small difference from 56% of Gen Xers who are also in that category of actively using credit cards as well. That may be for to earn rewards, maybe balance transfer cards, some people may be getting into debt and the dark side of credit cards.

Hamilton: There are those out there.

Douglass: Also, another stat that was really interesting was that about ... A little over a third of Millennials, about 37%, versus about 24% of Gen Xers, or other age groups as a whole, are willing to pay annual fees. That, to me, actually speaks to a level of savviness potentially, hopefully. That folks are like, "Oh, yeah sure, I'll pay this $50 fee, but that's because it's going to unlock these double travel rewards," or something like that. My hope is that means folks have run the numbers and really kind of thought it through and been like, "Yeah, this makes the most sense for my financial situation to be out this $50, but to save $300 later."

Hamilton: Yeah. That very well may be the case. It's really hard to say from the data. It could also mean that credit issuers are good at marketing and getting people to sign up for cards, which no doubt they are, but in the instance, like you mentioned, of an annual fee but the rewards off set that annual fee, and not at the expense of you getting into debt and incurring interest charges ...

Hamilton: Absolutely makes sense to pay annual fees or pay any fees in those scenarios.

Hamilton: But yeah, it is interesting to see just the differences there with the heightened willingness to incur a fee.

Douglass: One point that you made that I really want to draw out a little bit more is that you said, "As long as that annual fee isn't causing you to take on more debt or something like that." To try and get those rewards to off set it. I mean, I think that's just a really crucial thing with credit cards in general, that you want to make sure that you're basically putting on the card stuff that you were spending anyway. I have a monthly phone bill, I put it on my credit card. I would be paying it via debit card or a check or whatever else they need-if I weren't putting it on my credit card. I'm not saying, "Oh, you know what? I really need to go and buy an extra $150 worth of stuff this month so that I can get into this tier." That's a really dangerous thing, and it can get really ugly, really quickly. You can get into a debt spiral. It's just generally not worth it.

Hamilton: That's what issuers bank on, to be frank. If you look at their income streams, they earn money from interest charges. As you mentioned there, earning rewards at a 1 or 2 percent rate, but to be charged interest at a 20% rate, obviously, your net 18% to the bank, not your bank account.

Douglass: Yeah, it's a good way to make somebody else wealthy.

Douglass: Not so great for yours.

Douglass: We've got a lot of other information about credit cards, about do's and don't's. Also, when thinking about budgeting, debt in general, and really just kind of that holistic initial financial picture, at fool.com/creditcards, got a lot of good information there. Be sure to check us out. Hamilton, thanks, as always.