More Americans are using their credit cards for small purchases. But is that actually a good thing?

If there's one benefit credit cards offer, it's convenience. Rather than worry about having enough cash on hand, with a credit card, you can swipe your way through life without ever having to hit the bank. In fact, credit cards make purchases so easy that a growing number of consumers are using them to pay for smaller transactions as well as larger ones.

In a recent CreditCards.com survey, 17% of consumers said they now use their credit cards consistently to pay for transactions under $5. This represents a notable uptick from the previous year, when only 11% claimed to do the same. As a result, debit card and cash usage for small purchases each saw a 3% drop over the past year. 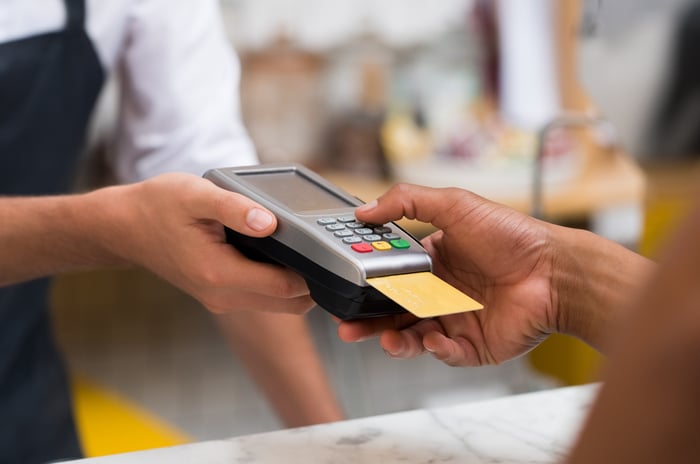 Not surprisingly, younger adults aged 18 to 36 are more likely to charge small purchases on a credit card than baby boomers, 70% of which said they still prefer cold hard cash. But no matter what age group you fall into, using a credit card for life's littlest necessities can be a good thing or a bad thing, depending on how you look at it.

Why it's a good thing

When you use a credit card to make purchases, even small ones, you have a record of how much you've spent. This can help you better track your expenses and ensure that you end up sticking to your budget.

Furthermore, since most credit cards come with built-in rewards, using them for small purchases can put extra money back in your pocket. A series of minor transactions, negligible as each might seem individually, can really add up over time.

Imagine that instead of paying by cash or debit card, you use your credit card to purchase a $3 latte five days a week. Assuming your card offers 1% cash back (keeping in mind that some offer more), you'll get $7.80 over the course of a year. Now on its own, that sum is hardly impressive. But if you use your credit card to make five more similar purchases each week, you'll get closer to $50 back by year's end. Given that most people have less than $1,000 in the bank, and that 34% have no savings at all, getting $50 back on the things you're already buying can make a big difference.

Why it's a bad thing

Though there are benefits to using a credit card for small purchases, the danger is that you're likely to be more liberal with those purchases if you don't actually need to fork over the cash to pay for them. Imagine you typically withdraw $60 a week in cash to pay for breakfast and lunch. If, on a given week, you blow through your budget by Wednesday, there's a good chance you'll brew your own coffee and brown-bag it for the remainder of the week until your mealtime allowance resets. But if you have a credit card, it'll be easy enough to charge those extra meals, even if your budget doesn't actually allow for it. In fact, your credit card might cause you to disregard your budget altogether, which can not only impede your savings goals but also lead to debt.

Furthermore, if you use a credit card to make minor purchases, you may end up spending more than you would've spent in cash. According a Bankrate study, folks who typically use credit cards at fast food restaurants, which are generally inexpensive, spend 50% more, on average, than those who pay for their grub with cash.

Use your credit card wisely

There's nothing wrong with using your credit card for small purchases as long as they're actually part of your budget. If your grocery allowance, for example, is $300 for the month, and you use a credit card six separate times to charge a $3 loaf of bread, that's all fine and good provided you keep track of that $18 and deduct it from your $300 total. Otherwise, you risk running into a situation where you can't pay off your balance by month's end, and that opens the door to needless interest charges that can easily wipe out whatever cash-back reward you get in the process. You're much better off forgoing 1% cash back on your $3 lattes than winding up in a situation where you're paying 20% interest for the privilege of having charged them.