How's that for a silver lining?

Retirement isn't the sort of thing workers can afford to just jump into. Rather, it requires careful financial planning along the way. It's especially crucial that baby boomers put some thought into retirement, since it's a near-term prospect for many.

Now the bad news is that a large chunk of today's older workers are woefully unprepared for retirement from a savings perspective. An estimated one-third of adults 55 and over have less than $10,000 in a nest egg, according to GOBankingRates, and only 23% have saved $300,000 or more. The good news, however, is that the majority of baby boomers are mostly debt-free, which helps make up for their lack of savings. 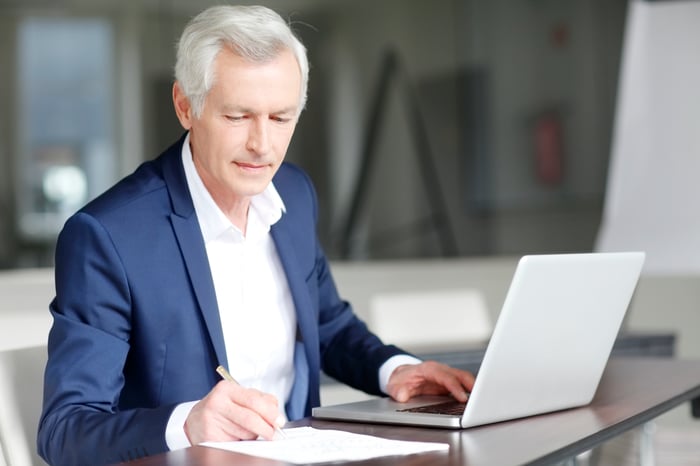 A good 57% of baby boomers have credit card balances of $1,000 less, according to the Insured Retirement Institute, and while $0 is, of course, more ideal, any sum between that and $1,000 is hardly catastrophic. Meanwhile, only 12% of boomers owe $10,000 or more in credit card debt.

Now if you're sitting on minimal debt and have a number of years before you're set to retire, you have a pretty good shot at paying it off before your career comes to a close. And that's a good thing, because once you move over to a fixed income, the last thing you'll want is a nagging credit card payment hanging over your head. But if you're sitting on a higher balance, you'll need to make more of an effort to knock it out. Otherwise, that debt could really derail your retirement plans and cause undue hardships for you later in life.

If you're carrying a notable chunk of credit card debt and you're already in your late 50s or early 60s, you have some work to do prior to retirement. But if you don't eliminate that debt before your career ends, you risk taking it with you to the grave. Therefore, the first thing you'll need to do is review your various debts (assuming you're carrying balances on different credit cards) and figure out which have the highest interest rates. From there, you'll need to establish your hierarchy and pay down your costliest debts first.

You might also look into consolidating your debt if you're able to do so at a lower rate than what you're currently paying. One way to go about this is via a balance transfer, where you move your different debts onto a single credit card. Many cards offer 0% introductory rates for a number of billing cycles, which means that you get a little reprieve from all of that interest compounding against you.

Now that you have a payoff strategy to work with, the question becomes: Where will you get the money to actually make a dent in that debt? And here's where you have a few different options. You can start by cutting corners in your budget to free up cash that can be used to pay down debt. This could mean making one large drastic change, like downsizing or unloading a vehicle, or it can be accomplished by implementing a series of smaller changes, like downgrading your cellphone and cable plans and skipping restaurant meals for a period of time.

Another option is to take on a side hustle and use the extra money you earn to pay off your debt. Working a second gig on top of your regular job may not seem ideal, but here's one reason to consider it aside from the additional cash: Once you retire, you're going to need something to do with your days. If you establish a side business you enjoy, you'll have everything all nice and set by the time you actually resign from your primary job. And that's a good way to not only buy yourself more financial flexibility as a senior, but help stave off boredom and depression.

Giving your savings a last-minute boost

If you're among those baby boomers with virtually no credit card debt to show for, you're in pretty good shape -- assuming your nest egg is also healthy. If it isn't, however, then you can apply the strategies above to boost it. Cutting back on expenses for a number of years or working a second job could help you get closer to maxing out your IRA or 401(k), thereby putting you in a better financial position for when you do decide to retire.

One final thing: No matter where you stand debt-wise today, don't make the mistake of racking up additional debt between now and when you retire. Kicking off your senior years with a clean financial slate will help you avoid much of the stress so many retirees face today.