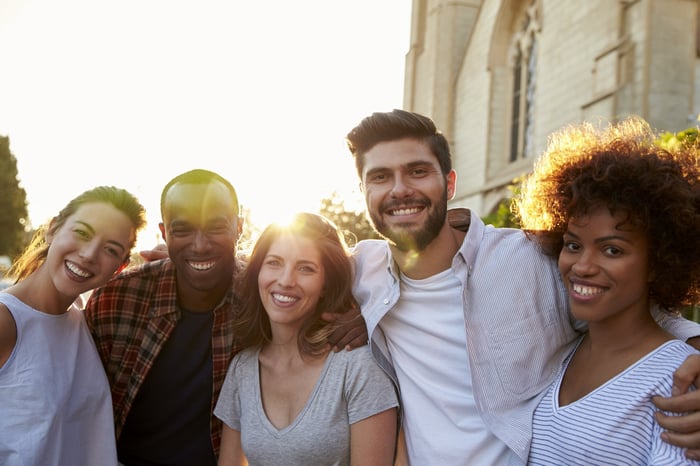 Credit cards are unquestionably convenient, and they allow you to save money by giving you cash back or rewards for the things you were already planning to buy. But credit cards can also be costly -- namely, because if you rack up a balance you can't pay off, you'll accrue interest on that sum, which is effectively the same thing as throwing your money away.

Americans on a whole aren't strangers to credit card debt. In fact, the average revolving credit card debt balance last year was $6,271, according to new research by The Ascent. But some age groups carry more debt than others, and you may be surprised to learn who has the lowest level of debt.

Why the significant gap? One explanation is that younger people may spend more judiciously since they earn less. Another is that younger people may be subject to lower credit limits, so they can't rack up the same balances as their older counterparts. Plus, older Americans with debt may have already carried it for years, so their existing balances could reflect not only the principal amount of debt they accrued, but accumulated interest on that principal.

Either way, carrying debt is dangerous at any age, so if you have a nagging credit card balance, your best bet is to try to get rid of it as quickly as possible. In this regard, younger people may have an advantage over older folks. Many people 75 and over no longer work and may live on a fixed income. As such, eking out extra money to chip away at their debt can be difficult, and for some, impossible.

Those 35 and under, however, are generally either active members of the workforce or students with the potential to be. So if you're younger and are in debt, a few smart spending changes could be your ticket to kicking your debt to the curb.

How to start reducing your debt

First, set up a budget so you know what your monthly bills look like. Then, identify a few expenses you're willing and able to cut back on. That could mean eating at restaurants less frequently, canceling some subscription boxes, or even moving to a cheaper home once your lease runs out (assuming you won't incur expensive costs in the course of moving). Spending money more mindfully could be your ticket to eliminating credit card debt, and the sooner you do, the less money you'll throw away on interest.

Though it may be surprising to learn that Americans 35 and under have the least amount of credit card debt, the reality is that an average balance of $3,660 is still pretty significant. Getting rid of that debt as quickly as possible could be your ticket to financial freedom, so make it a priority in the near term.