Please ensure Javascript is enabled for purposes of website accessibility
Log In Help Join The Motley Fool
Free Article Join Over 1 Million Premium Members And Get More In-Depth Stock Guidance and Research
By Matthew DiLallo - May 25, 2016 at 3:33PM

Shipping stocks can be as volatile as the stormy seas. Not only do these companies employ a lot of leverage to maintain their fleets, but the shipping industry is exposed to global economic headwinds, which can change direction quickly. Investors need a strong stomach before diving into shipping stocks like Seaspan (ATCO 0.37%) and Diana Shipping (DSX -4.17%), which have been pretty volatile during the past year: 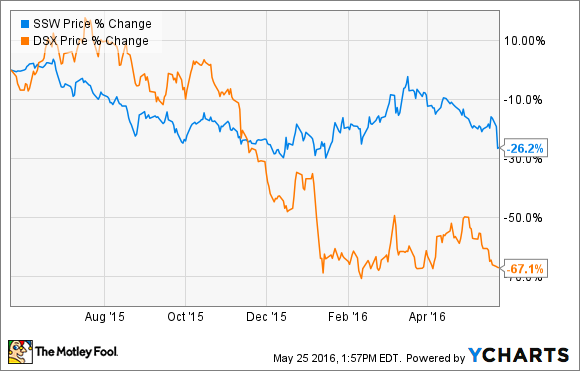 For those who can handle the volatility, here's a closer look at which of these companies is the better shipping stock to buy.

Ships are expensive to build, and shipping companies must borrow heavily in order to grow their fleets. However, as the chart below shows, Diana Shipping has employed less leverage to build its fleet of 46 dry bulk vessels than Seaspan has used to construct its fleet of 86 container ships:

One thing that's worth noting is that Seaspan's actual long-term debt is currently $3.1 billion. However, when adding in other long-term liabilities, such as future payments for vessels under construction, as well as other financial instruments, its total liabilities increase.

Still, as of the end of the first quarter, its overall leverage as a percentage of the value of its assets was quite hefty. Because of this, Diana Shipping scores the points for having the better balance sheet.

Diana Shipping is focused entirely on owning dry bulk vessels, though it does own a stake in an affiliated containership company. The bulk of its vessels are under time-charter contracts that end during the next two years.

This focus on dry bulk vessels, which are often signed to rather short-term contracts, exposes the company to the risk of having to recharter its vessels at the going rate. This can lead to more volatility within its cash flow if market fundamentals take a turn for the worse.

Seaspan, on the other hand, has the bulk of its vessels locked up under long-term contracts with an average remaining charter length of five years. Further, just 2%-3% of its revenue in 2016 faces any recharter risk. Finally, Seaspan has $5.7 billion in contracted revenue in its backlog. In other words, Seaspan's business model provides strong cash-flow visibility.

This focus on signing its vessels up under long-term contracts has served Seaspan well during the past decade. Its business model has proven to be very resilient, enabling the company to steadily grow cash flow, which is quite the opposite of what has happened at Diana Shipping: 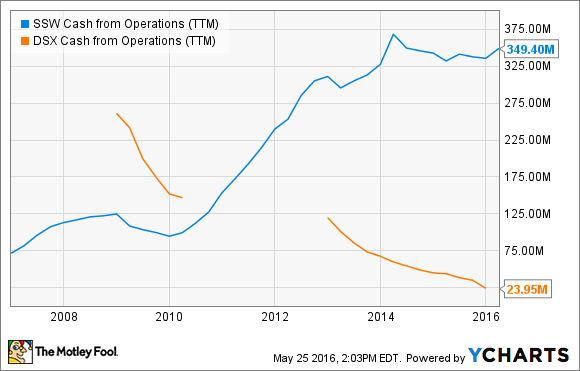 Given the fact that the bulk of its vessels are contracted for the next five years, Seaspan's future upside isn't predicated on shipping rates rising, which is a big potential driver for Diana Shipping. It's nearly impossible to predict where rates will go, which makes it hard to give Diana much credit for its upside to rising shipping rates.

What we can clearly visualize is fleet growth. In Diana Shipping's case, it currently has three vessels under construction, with one expected to be delivered next quarter, and the other two by the end of the year. That implies 6.5% fleet growth for the company.

Meanwhile, Seaspan has 17 vessels under construction, with eight of them expected to be owned by Seaspan, and the other nine by its joint venture. This implies 9.3% fleet growth for Seapan's owned fleet, and 16.8% growth in its combined fleet based on the 101 vessels it manages when the vessels owned by its joint venture are added to the mix. This stronger visible growth gives Seaspan an edge over Diana Shipping in this category.

While Diana Shipping has the better balance sheet and more upside if dry bulk rates increase, Seaspan has a better business model, and clearly visible growth potential. Those factors, in my opinion, make Seaspan the better buy.