"You should tell your work to build one of these near us."
- My daughter after our visit to the new 365 store in Los Angeles

My daughter may not quite understand what a channel check is (due diligence for distribution channels) or what I do for a living, but she was clearly impressed with the store.

365 by Whole Foods Market (NASDAQ:WFM) is closer to a combination of a fruit stand, convenience store, and a restaurant than a traditional grocery store. While there were some people with full shopping carts, most customers were not ticking through their weekly grocery list. Some of that may have to do with the newness of the store -- it had only been open for five days when we visited.

The "5ish Items or Less" line had about 10 people in it constantly, while we were there, although the line was moving quickly with two employees checking out customers. The standard checkout, with about twice as many people in line, had an even split of shoppers with small baskets and carts. Combine those two lines, and it's pretty clear the average sale will likely be substantially smaller than a standard Whole Foods Market or other traditional grocery store. But 365 should be able to make up for that with a higher volume of customers and higher margins, especially on the prepared foods.

The store was absolutely packed at 12:30 p.m. on Memorial Day. Whole Foods had parking attendants pointing people to open spaces. We drove into the lot the wrong way, messing up the queue, so we snuck out gracefully and parked on the street a few blocks away. I'm sure the CVS Health pharmacy that 365 shares the strip mall with isn't too happy, but the crowds will probably die down after the initial rush of curious shoppers subsides.

The single main entrance lands you in the produce section. There's a separate area with a glass partition for refrigerated produce, saving energy by cooling just the smaller space. In fact, the whole store seems to be designed for energy efficiency, including the refrigerators and freezers that all have sliding doors to keep the cold in.

The next section contains self-service prepared foods at multiple stations. Everything from salad and pizza to soups, noodles, and rotisserie chicken is available for purchase. Food is sold by volume rather than weight, which should help with speedier checkouts.

The food is prepared in a work space visible from the store, making 365 feel like a restaurant with an open kitchen. There are also made-to-order options for bowls, pizza, and hot dogs. Customers order on a tablet and a digital display on the wall tells them when their order is ready. Might as well pick up a few items while they wait, no?

Continuing our tour, there are refrigerators and freezers followed by staples in traditional aisles with 365 branded items alongside other products although options are fairly limited. The shelves are simple, which fits with the unfinished style and exposed ductwork of the building. The too-cool-to-finish-it aesthetic works well with the artsy design as the store features large murals on the walls and a modern vibe with electronic price tags and large electronic screens throughout the store promoting Whole Food's My 365 Rewards program and ways to connect on social media.

Against the far wall, there's a nice selection of beer, wine, and other adult beverages. A few tablets are available to look up reviews of the offerings, certainly cheaper than paying the wine experts available in its larger Whole Foods Market stores.

In that section, there are a couple of stands with "flash finds", mostly of the non-alcohol variety. The concept seems like a good idea, but it's a bit out of place. The flash finds are similar to Costco's rotating items, which make you feel like you have to buy it now or risk missing out. But while Costco puts many of those items on the endcaps of the main aisle, at 365, they're tucked in the back where fewer people would see them. 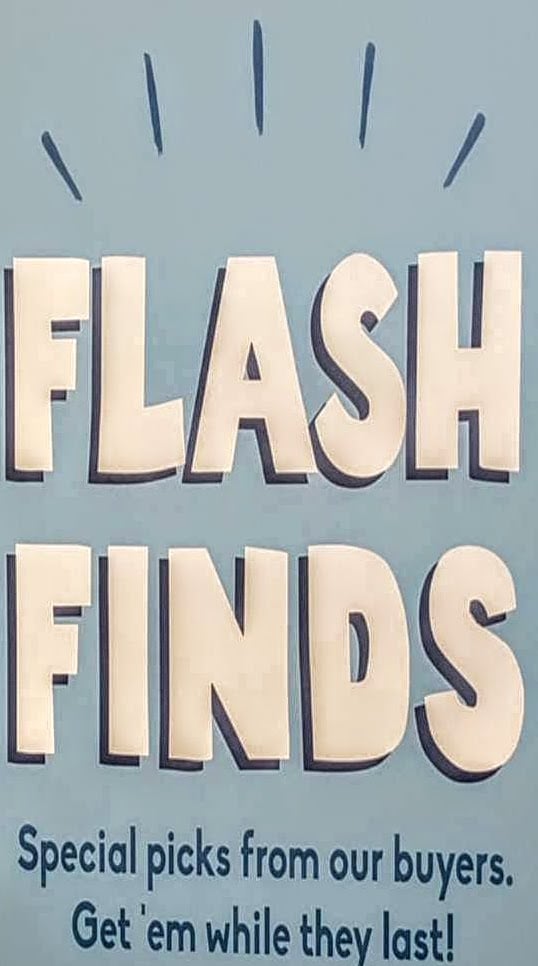 Of course, 365 will hopefully have customers returning more frequently than Costco, so the impulse to buy might not be as strong. Perhaps management's idea is to bring customers through the alcohol and staples sections to check out the flash finds -- and potentially make a purchase along the way -- rather than make the flash finds a direct selling point.

Speaking of impulse buys, the main checkout has one line feeding all the cashiers, speeding up the checkout process while also creating a corridor that everyone with more than a handful of items has to follow with opportunities to purchase magazines and other items while they wait to pay.

In the front two corners of the store, you'll find a bar-coffee-juice shop called Allegro Coffee and by Chloe, a vegan restaurant. Allegro is fully integrated into the store with the ordering window visible from the main store and seating both inside and outside that is also available to customers buying prepared foods in the store.

By Chloe, a New York City-based vegan restaurant, on the other hand, has its own space with an entry from the 365 store -- which was blocked off as it wasn't open for business yet -- as well as its own separate entrance from the parking lot. Like the larger Whole Foods Markets, the smaller 365 stores will have a variety of offerings in a program called Friends of 365. Two more 365 stores, one in Washington and one in Oregon, are planned for this year with potentially 10 more next year, but they may have other Friends of 365 offerings.

Enough for a turnaround?

While first impressions were very positive, the big question for investors is whether the new 365 concept can help reaccelerate Whole Foods' revenue growth as the company has started to see new stores cannibalize sales from existing locations. 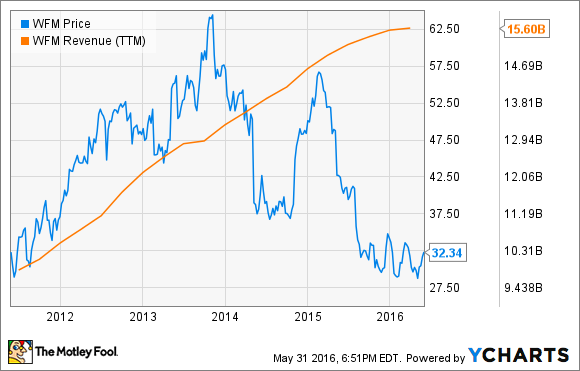 After experiencing a 365 store firsthand, it's easy to see management's vision. The 365 stores are designed to supplement, not replace, the larger Whole Foods Markets. I think they'll do well as an alternative to dinner restaurant takeout, especially for people that want to pick up a few grocery items along the way, and in areas where there's a large contingency of workers that eat out for lunch.

It'll be awhile before we know whether that vision becomes a reality. The initial high volume of customers during my visit was certainly a good sign, but the results following the new store hype will be a better indication of the long-term prospects of the 365 concept.