Tesla Motors' (NASDAQ:TSLA) most recent annual shareholder meeting was packed with content, quotes, and insight. Here are three of the most important takeaways.

Tesla's Model X, which the company started first delivering at the end of last year, has been receiving mixed reviews. Its flashy falcon wing doors in particular have been controversial. While auto magazines and reviewers have generally praised their styling and the space for entering and exiting the vehicle they create, the doors have been criticized for not working reliably.

Fortunately, Tesla CEO Elon Musk not only admitted the doors are currently flawed, but he also said some upcoming software updates will make these doors much better.

The software that controls the Model X and the operation of the doors has been incredibly difficult to refine. I think we're almost there in making the doors useful. ... Digging ourselves out of the hole has been quite, quite hard. I think with the software release that's going out shortly -- and then the other one that's going out in a month or so -- I think finally we'll be at a point where the doors will be better than normal doors as opposed to worse.

Recently announcing Tesla is accelerating its goal to build 500,000 vehicles per year by 2020 by two years, to 2018, Musk has been rethinking how vehicles are produced.

Investors, of course, want more than an aspiration -- and even more than a target for a certain vehicle production goal. Following a quarter in which the company's deliveries fell short of its own expectations as the automaker struggled to ramp up production of Model X as fast as it had planned, Tesla is going to need to start proving its production prowess before investors start believing the company can begin to execute on such dramatic improvements to vehicle production.

While Tesla doesn't charge today's buyers of Model S or X a fee for access to free lifetime Supercharging for long-distance travel, the company has charged a fee in the past for entry-level versions of Model S. Having charged for Supercharging before, one key question ahead of the first Model 3 deliveries late next year has been whether or not the company will opt to charge a fee for Model 3 Supercharging. 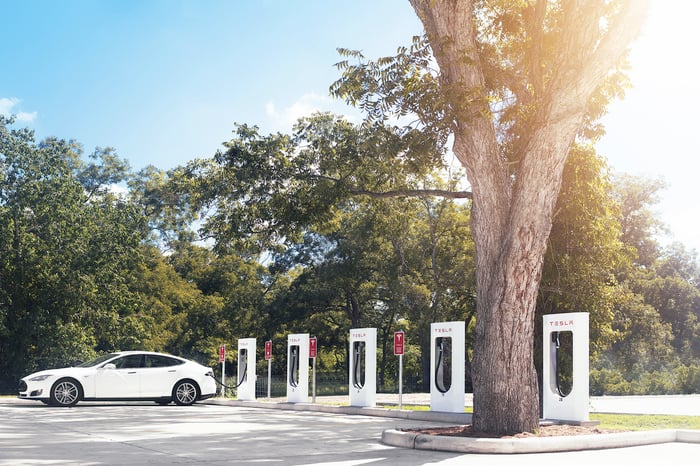 But wonder no longer: It won't be free. Here's Musk's answer to a shareholder question about Model 3 Supercharging:

The obvious thing to do is decouple that from the cost of the Model 3. So it will still be very cheap, and far cheaper than gasoline, to drive long-distance with the Model 3, but it will not be free long-distance for life unless you purchase that package. I wish we could [make Model 3 Supercharging free], but in order to achieve the economics, it has to be something like that.

What Tesla's motivation is, is to make electric transport as affordable as possible. That is what informs all of our actions. It's not because we want to make things more expensive, it is because we can't figure out how to make it less expensive. That's all.

Tesla's extensive Supercharger network is one of the key selling points for Tesla vehicles. It will be interesting to see how much the company decides to charge Model 3 buyers.

For Tesla shareholders, the lengthy annual shareholders meeting is worth listening to in full. It's available to watch or listen to on the investor relations portion of the company's website.