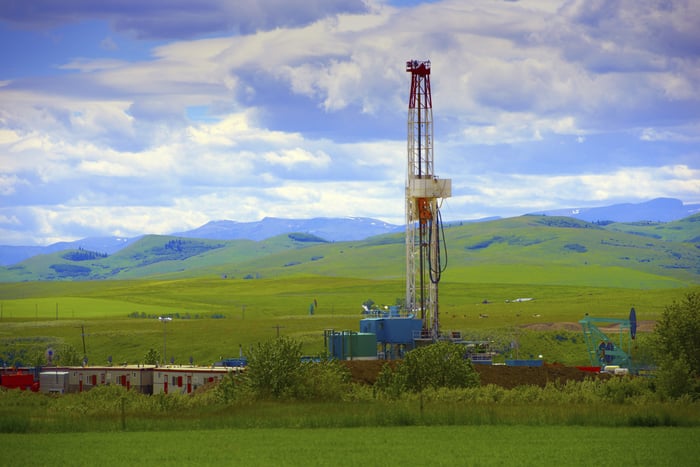 What: Shares of Parsley Energy (NYSE:PE) surged in May, running up nearly 10% for the month. While rising oil prices certainly helped, with crude ending the month up nearly 8% closing just below $50 a barrel, it was far from the only fuel driving this stock higher.

So what: Parsley Energy started the month off on a strong note, reporting solid first-quarter results, with the company beating the consensus estimate by $0.06 per share. Fueling those results was its strong production, which was up 15% over the prior quarter and 54% year-over-year, as well as continued solid cost reductions. In addition to that the company noted that its banking group affirmed its borrowing base at $575 million while its credit rating agency ungraded its credit rating. Those were extremely positive moves given that most other oil companies were seeing their credit and credit ratings cut due to concerns surrounding leverage in the sector amid weak oil prices.

Rival SM Energy (NYSE:SM), for example, started the year with a $2 billion borrowing base on its credit facility and a $1.5 billion commitment level. However, at its spring redetermination SM Energy saw its borrowing base and commitment level both fall to $1.25 billion. Further, one of its credit rating agencies downgraded its credit rating four notches, taking it down from Ba1 to B2, which happens to be the same level to where Parsley Energy was upgraded.

Parsley Energy put its reaffirmed liquidity and improving credit to work during the month, announcing the acquisition of mineral rights under 30,000 acres for $280.5 million. That deal marked the company's second acquisition in as many months, with it announcing an agreement to acquire nearly 23,000 acres in April for $359 million.

The company's latest transaction, however, was noteworthy because of how Parsley Energy planned to pay for it. To fund that deal the company announced a $200 million bond offering, which was the first junk-rated E&P bond priced this year. That speaks to the overall strength on Parsley Energy's credit in that while its credit rating is non-investment grade, bond investors still see its debt as a solid investment.

Now what: Parsley Energy had a lot of good news for its investors last month. Not only did the company's production and credit improve, but it was able to continue to acquire additional acreage, which sets it up for future growth. This has the company well positioned to continue to deliver sharp growth in the years ahead.