Those are notable numbers, but lately the market hasn't been too impressed with shares of the quartet. In spite of recent rallies, all are trading down so far this year. 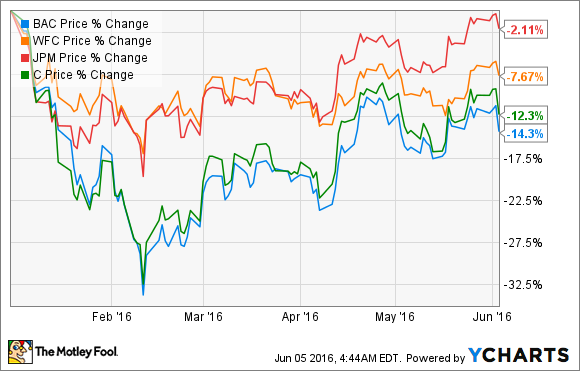 That means there's potentially much value in both Bank of America and Wells Fargo. Here's the stock I feel is the better bargain right now.

Battle of the banks

Broadly speaking, of the two, Wells Fargo is the more traditional lender. Unlike Bank of America, JPMorgan Chase, and Citigroup with their big investment banking operations, Wells Fargo tends to concentrate its efforts on classic lending activities. It's particularly strong in mortgages, to the point where it's far and away the top real estate lender in the country.

That activity has greatly helped the company get to the size it is today. If we compare its key growth rates to those of Bank of America, we can see that it's well outpaced its rival both in terms of loan and deposit growth in the aftermath of last decade's financial crisis: 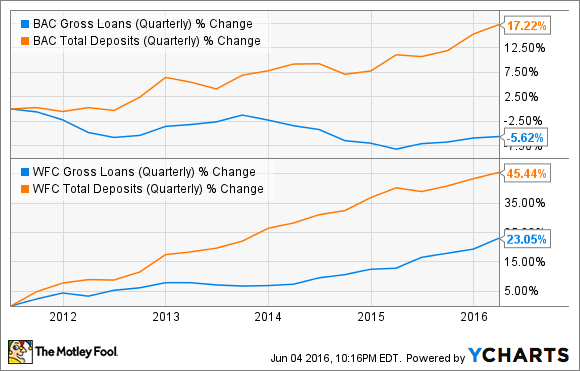 A glance at several other key metrics from the respective first quarters of the two banks reveals the following:

Although the two lenders are more or less in the same ballpark as far as loan quality in terms of net charge-off ratio and efficiency ratios, there are significant differences in other important figures. Wells Fargo saw growth on the top line, helped along by an increase in non-interest income -- basically, fees. Bank of America saw declines in both line items, particularly the latter. Wells Fargo, meanwhile, posted a return-on-assets number that was more than twice that of Bank of America.

Despite the clear difference in performance, these are historical figures. So, as the old warning goes, they are not necessarily indicative of future performance.

But what might very well be a harbinger of things to come is loan-loss provisioning. This matters now because both banks are well exposed to the energy sector, which is reeling because of persistently weak oil prices.

As of this past February, Wells Fargo had around $42 billion in outstanding loans to the sector. Bank of America wasn't too far away, at $44 billion. They're almost neck-and-neck, but Wells Fargo is much more actively saving for a rainy day.

There is one standout figure that heavily slants toward Bank of America -- the price-to-book value ratio, a crucial measure in a sector that lives and dies by its assets. The company currently trades at a price/book of just over 0.6 on its most recent assets tally, which in my opinion is unsustainable. Wells Fargo's number clocks in notably higher, at nearly 1.5.

Yet in the final (I promise) valuation measure I'd like to spotlight -- price/earnings to growth, basically, a company's current P/E measured against its anticipated improvement in profitability -- Wells Fargo takes the prize, with 1.3 to Bank of America's 1.6.

Admittedly, that's not a huge difference, but it's a difference nonetheless. It indicates that Wells Fargo is modestly cheaper in terms of future expectations for profit, as opposed to far less expensive on a historical asset basis. Of the two, I'm much more encouraged by the former.

So, for me, Wells Fargo is the clear winner in this clash of the banking titans. I think arguments can be made for buying both stocks, but in my view, the California-based bank is clearly the better performer -- and will continue to be in the foreseeable future.