What: Shares of Targa Resources Corp (NYSE:TRGP) jumped 11.9% in May. While the company's shares have been boosted by rising crude oil prices like every other company in the oil and gas industry, Targa also benefited from some hedge funds announcing that they had added positions in Targa.

So what: Targa has been on a bit of a bumpy ride over the past year. When the company announced late last year that it was consolidating by buying out the remaining stake in its master limited partnership a la Kinder Morgan, the market has gone back and forth about the deal. Ever since the deal was completed on February 17th, though, the company's stock has been on a tear. 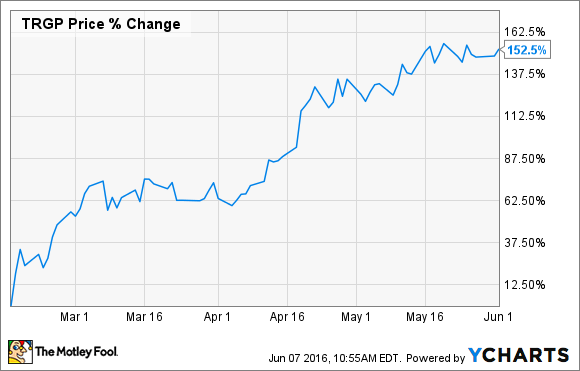 This month, some of those gains came thanks to the rise in crude oil prices. For most pipeline and processing companies, price movements shouldn't mean much, but Targa's revenue based is a little more sensitive to commodity prices than others. Its revenue structure is about 70% fee based, whereas many large pipeline and processing companies prefer to have fee-based revenues north of 80%.

It also helps Targa that it got the blessing from hedge fund Third Point Capital. While the 1.8 million share position -- worth about $81 million -- is rather small, it does show that the company may be on the right track toward better times ahead.

Now what: With the consolidation out of the way that will help lower the cost of capital for further growth, Targa does look to be in a better position. Ideally, the company would adjust its contract structure more toward fee-based revenue like other larger pipeline and processing companies, but we may have to wait and see if that's in the cards over the long term.

For now, it's probably best to wait until we see a couple of quarters of earnings reports from it as a consolidated company before making any hard investment decisions about Targa Resources.