What: Shares of Cal-Maine Foods, Inc. (NASDAQ:CALM) pulled back 12% last month, according to data from S&P Global Market Intelligence, getting dinged by an analyst downgrade and falling egg prices. 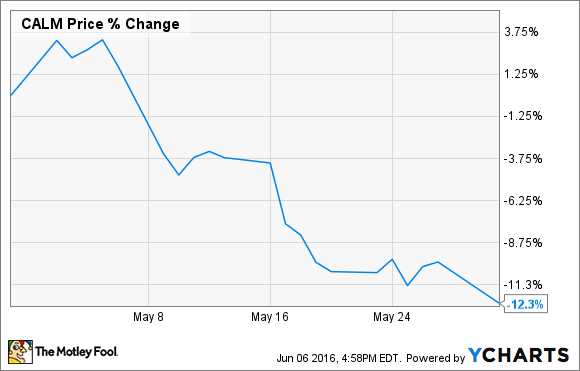 So what: The worst day for Cal-Maine last month came on May 9 as the stock fell 5% on a downgrade by DA Davidson. The research firm lowered its rating on the nation's largest egg seller to "underperform," and lowered its Q3 EPS forecast to $1.05 from $1.27 due to an egg glut causing lower prices.

Bloomberg reported that week that egg prices had plunged as much as 75% as the laying hen population rebounded faster than expected following last year's avian flu epidemic. Cal-Maine share price and profits had soared previously thanks to higher egg prices from the avian flu outbreak, but the boom times appear to be over for now. With the drop in egg prices, analyst estimates for Cal-Maine have also fallen sharply. The EPS consensus for next year is just $2.33, down from $3.59 a month ago and $5.04 three months ago.

Now what: As a commodity business, Cal-Maine's profits can be volatile, but the company's acquisition strategy has delivered results as its share price has more than tripled over the last five years. The company also looks well-positioned over the long term with the national shift to cage-free eggs -- most restaurant and supermarket chains have pledged to sell only cage-free eggs within the next 10 years. The more expensive eggs should help boost Cal-Maine's profits as it builds more cage-free henhouses to satisfy the growing demand. While lower egg prices will be a near-time headwind for the company, the long-term outlook still looks strong thanks to increased concern for animal welfare.