Demand for natural gas produced in the U.S. is expected to grow by 27% through the end of this decade. However, what most investors overlook is where an outsized portion of this demand growth is coming from. While LNG exports, electric power, and industrial demand grab all of the headlines, U.S. natural gas exports to Mexico are an often-overlooked demand-driver. That's despite the fact that Mexican demand for U.S. natural gas is expected to double over the next decade. 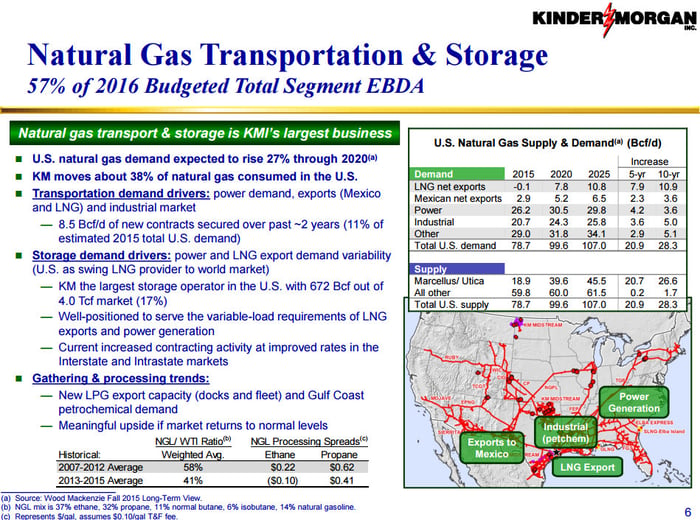 Just this week, TransCanada was able to capture one such opportunity after its joint venture with Sempra Energy (NYSE:SRE) subsidiary IEnova was chosen to build the Sur de Texas-Tuxpan natural gas pipeline in Mexico. The $2.1 billion project is supported by a 25-year natural gas transportation service contract to transport 2.6 Bcf/d for Mexico's state-owned power company. Under the terms of the agreement, TransCanada will develop, operate, and own 60% of the project, while the Sempra Energy subsidiary will own the other 40% of the project. The project is expected to be in service by the end of 2018.

This project brings TransCanada's footprint of existing assets and development projects in Mexico up to more than $5 billion. Further, all of its projects are backed by 25-year agreements with Mexico's state power company. That's important for the company because these long-term, fee-based contracts lock in the company's cash flow, providing a solid foundation for its dividend.

That being said, the company is currently planning to sell up to a 49% stake in its five natural gas pipelines in Mexico in order to help pay for a recent acquisition. However, it's unwilling to part with its entire Mexico pipeline business because of the fee-based cash flows and growth opportunities.

Leading the way to bring gas to the border

One other emerging growth opportunity is a potential capacity expansion of the company's 85-mile Meir-Monterrey pipeline, which stretches from the Texas border to Monterrey, Mexico. The pipeline connects to a natural gas power plant as well as to a natural gas transportation system. Kinder Morgan is currently exploring the possibility of doubling that pipeline's capacity, a project that could be in service by the end of next year.

Meanwhile, the company has a number of connections along the Texas and Arizona borders, with plans to continue to expand its connectivity along the border in order to supply Mexico's growing gas demand: 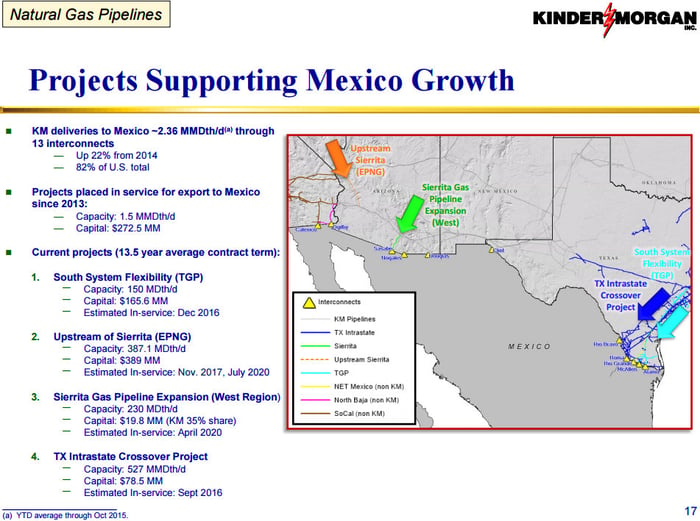 As that slide notes, the company has a couple of projects coming online this year, with others coming online early next decade. Importantly, all are supported by strong long-term contracts, with an average contract length of more than 13 years, which provides great cash flow visibility for the company.

Mexico is a bigger driver of demand growth for natural gas than most investors realize. In particular, it should fuel strong growth opportunities for pipeline companies, with Kinder Morgan and TransCanada among the best positioned to capture these opportunities because of their already strong footprints.