The coffee market has been changing. Privately held JAB Holdings has been snapping up brands to build a conglomerate designed to take on industry leaders Starbucks (NASDAQ:SBUX), Dunkin' Brands (NASDAQ:DNKN), and J.M. Smucker's (NYSE:SJM) Folgers.

In a somewhat quiet fashion, JAB has acquired Keurig Green Mountain -- which controls the single-serve business in the United States -- while also having a pending deal for Krispy Kreme (NYSE: KKD). That chain would join Peet's Coffee & Tea, Caribou Coffee, Jacobs Douwe Egberts, and Stumptown Coffee Roasters among other coffee-related holdings in the company's portfolio. It's a powerful group of brands, but it's not enough to knock Starbucks, Dunkin' Brands' Dunkin' Donuts, and Folgers from their industry-leading positions.

Why is JAB not a threat?

While JAB has assembled an interesting collection of somewhat related assets, its combination of companies doesn't change the balance of power in the coffee industry. Keurig already dominated the single-serve home market in the United States. At the time JAB purchased it last December, it had 61% of the North American market, which accounts for about 40% of the $15 billion global market, according to market research firm Euromonitor International.

Keurig so dominates the single-serve market that all its major rivals, including Starbucks, Dunkin' Donuts, and Folgers have to work with it, paying it a royalty on K-cups. That's impressive, and JAB should be able to make more money from K-cups by keeping some of its royalty revenue all in the family, but nothing it has acquired changes the market. The new JAB-owned consortium can't dump Starbucks, Dunkin' Donuts, or even Folgers, so in the single-serve market nothing has changed.

The same is true in the retail space. Krispy Kreme gives JAB a Dunkin' rival while Peet's gives it a Starbucks alternative. The problem is that those chains have a long way to go before reaching the dizzying heights of over 22,500 global Starbucks locations or the 12,000 or so Dunkin' Donuts.

Krispy Kreme has about 1,100 shops globally, while Peet's has a few hundred. Add in JAB's few other retail brands, and it still lacks the heft to challenge Dunkin' Donuts or Starbucks. Perhaps that may not always be the case, but it's years away before either Krispy Kreme or Peet's can be anything other than an annoyance.

The same is true in the grocery market when it comes to competing with Folgers. JAB has acquired a lot of companies that compete with the mass market coffee brand, but no one company it owns has enough market share to be a real rival for J.M. Smuckers. 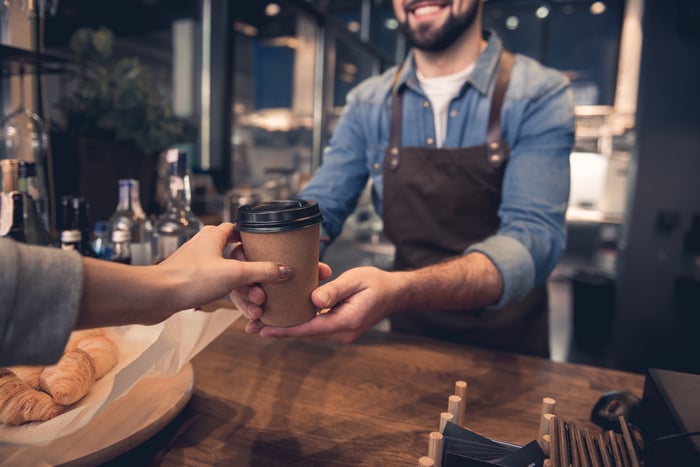 All strategies are correct

Just because Dunkin' Donuts, Starbucks, and J.M. Smucker retain their competitive advantages in the face of the JAB acquisitions doesn't mean the holding company doesn't have a smart plan. In buying up so many coffee companies, JAB has assembled a group of assets that can help each other. For example, it can sell Peet's Coffee as an upscale offering at Krispy Kreme while offering Krispy Kreme as a kitschy choice at Peet's stores.

In addition, the company has greater leverage with retail partners, and it strengthens its single-serve dominance. If Starbucks or Dunkin' had considered challenging Keurig (which Starbucks has already failed to do with its Verismo brewer), or pulling out of their partnerships with the company, JAB now has a portfolio that can weather that storm.

JAB Holdings has become a new coffee leader, but Starbucks, Dunkin' Donuts, and Folgers owner J.M. Smucker all retain their market positions. None of those three companies was counting on unseating Keurig, and while JAB's retail portfolio may someday be a threat, that's years away. It's a changing market, but all three of these leading coffee stocks should continue to grow even while JAB consolidates a big piece of the market.