If you want to buy the entire stock market, there's an easier way than submitting an order to buy each and every publicly traded stock. By making an investment in Vanguard Total Stock Market Index Fund Admiral Shares (NASDAQMUTFUND:VTSA.X) you'll own the Total Market Index and pay an expense ratio so low you might not even notice it.

What you get with the Total Stock Market Index Fund

The Vanguard fund tracks the CRSP U.S. Total Market Index, which represents "approximately 100% of the investable U.S. stock market," according to regulatory filings. Vanguard's investor website reveals that the fund held a stake in a whopping 3,668 stocks as of April 2016, representing virtually all of the stocks that regularly trade on the New York Stock Exchange and Nasdaq.

The fund weights its portfolio by company market capitalization. As of April 2016, Apple was its largest holding at about 2.3% of assets. The iPhone maker is more than 35,000 times larger by market cap than the fund's smallest holdings, which can have market caps as small as $15 million.

Because the Vanguard Total Stock Market Index Fund weights its portfolio by market capitalization, larger companies make up the majority of its portfolio. Companies valued at more than $24 billion made up about two-thirds (65.9%) of its portfolio. Only 7.2% of its portfolio was invested in small-cap stocks, or those with a market value of $2.9 billion or less. 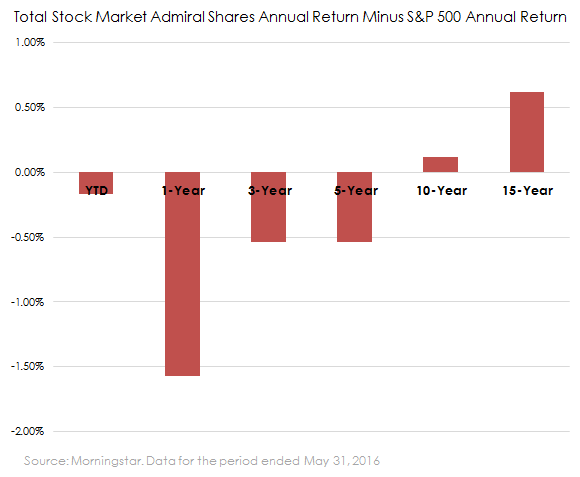 The difference in performance is relatively modest, amounting to just over half a percentage point for the most recent five-year period. The differential shrinks even further when one considers that it is impossible to buy the S&P 500 fee-free.

Importantly, the fund does exactly what it is designed to do -- deliver the returns of the total investable stock market minus a very small fee. The Admiral Shares carry a truly negligible annual expense ratio of just 0.05%. Investors who are lucky enough to have access to the least expensive share class, which is made available to investors who pony up $5 billion or more, pay just 0.01% of fund assets in annual expenses.

Of course, the difference between paying 0.05% and 0.01% is forgivable for the individual, amounting to only $40 per year on a $100,000 investment. When compared to actively managed mutual funds, whose expense ratios can rise as high as 1% or more per year, Vanguard's index funds are a certifiably cheap way to buy a diversified portfolio in a convenient mutual-fund wrapper.