After a two-year slide in oil prices, investors who were invested in big oil companies were some of the least affected investors in the energy industry. Being the least impacted by oil prices isn't exactly a compliment, though. All of them saw shares decline more than 10% over that time frame.

With the oil market starting to stabilize, however, you may be thinking it's time to take a renewed look at big oil stocks as a way to get a lower risk exposure to an industry that has some room to grow and is still selling at a discount. If that is the case, then the three companies that you should probably focus most of your attention on are Chevron (NYSE:CVX), Total (NYSE:TTE), and ExxonMobil Corporation (NYSE:XOM). Here's why.

Of all the big oil companies out there, Chevron quite possibly has the largest catalyst for growth waiting in the wings: its Gorgon and Wheatstone LNG projects. The two projects alone have required about $8 billion annually in capital spending for the past several years, and once on line, they will represent an oil-equivalent production of 340,000 barrels per day. For years, these projects have required an immense amount of capital that have sapped free cash flow. Once on line, these facilities will represent a major shift in cash inflows and outflows that will likely halt Chevron's hemorrhaging of free cash flow over the past three-and-a-half years. 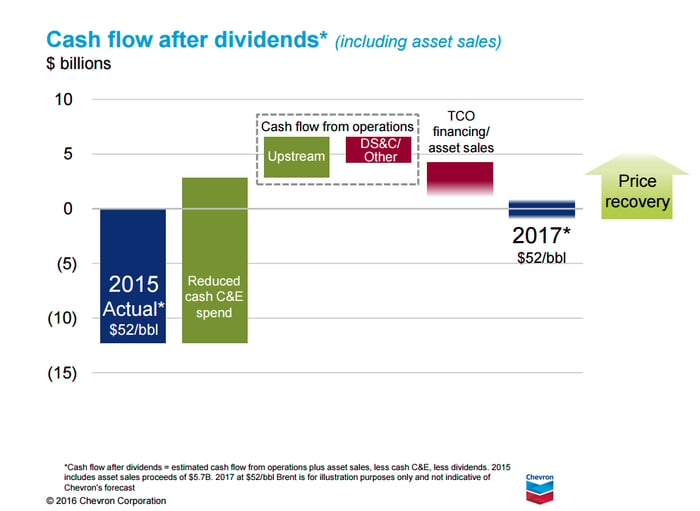 Getting this cash situation back on the right track will likely do wonders for the company's stock. Wall Street has been slightly bearish about Chevron mostly because of its inability to meet capital expenditures and dividend payments with cash flow from operations and has needed to rely on debt to fill the gaps. That is part of the reason why Chevron's shares are trading at a price to tangible book value that is well below its 20-year average. I'm using price to tangible book value here because it is a more consistent long-term valuation metric for companies that have fluctuating earnings from commodity prices. 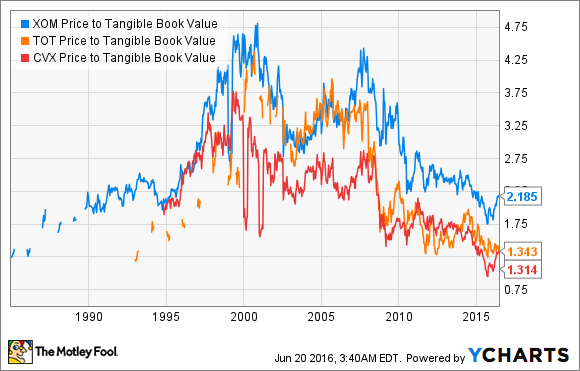 Bringing Gorgon and Wheatstone on line should have a major impact on Chevron's bottom line for several years to come. That catalyst and a relatively low valuation suggest that the company's shares could be worth a spot in your portfolio.

The French oil giant may not be the first name that comes to mind when thinking about big oil stocks. Thanks to the timing of recent investments and moves made by management over the past couple of years, though, the company is set up very well to be one of the better performers in the industry.

Total's recent earnings performance has been nothing short of remarkable when you consider what has happened to crude oil prices over the past year. While so many of its peers saw net income results decline more than 40% in 2015, Total's bottom line only shrank by 18%. The reason it was able to do this was threefold: It increased total production by a whopping 9.5% -- huge by big oil standards; the production it brought on were lower-cost sources; and it reaped the rewards of a multiyear rehabilitation of its refining and downstream operations.

This all led to Total generating an industry-best return on equity of 10%. It should also be noted that Total was the only one of the five integrated major oil companies that generated positive net income from its upstream production in the first quarter of 2016.

Even though the company brought many of its major projects on line in 2015 -- hence the big jump in production -- and management has cut capital spending to $19 billion for 2016, the company's current development schedule still plans to grow production at a rate of 5% or greater annually between 2014 and 2019. What's even more promising is that much of that production growth is based on crude oil prices ranging between $45 to $60 per barrel.

Despite Total's strong recent performance and management's budgetary plans into the next decade, its stock is still trading at around 1.3 times tangible book value. That's well below the company's historical average over the past 20 years and awfully close to the lowest valuation multiple over that time frame. So not only are you getting shares of a company that is looking very strong but you're also getting them at a very good discount.

For more than a century, ExxonMobil has been one of the few calming forces in what has historically been an extremely volatile oil and gas industry. Of course, having assets in all aspects of the value chain of oil and gas helps, but that doesn't separate it from the rest of its big oil peers. What has set the company apart has been management's steadfast decision to steadily invest in the business through the good times and bad, and it has paid off immensely over the years in terms of shareholder returns. 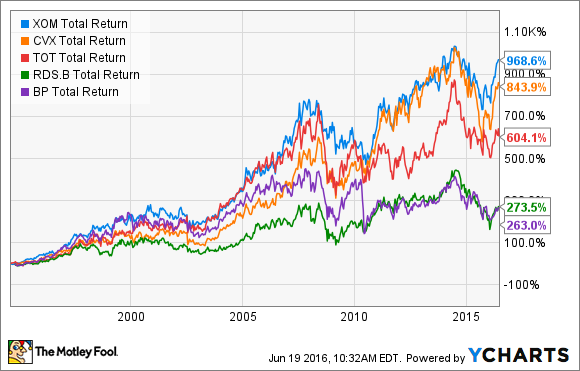 Although the company's reputation has been built on steadfast investment levels, management hasn't been completely oblivious to the recent downturn in oil and gas prices, either. As a result, the company has decreased its 2016 capital budget to $23.5 billion, a 25% reduction from 2015. Management is also dedicating a higher percentage of its investing dollars toward its downstream and chemical operations so that it can take greater advantage in any oil price environment. 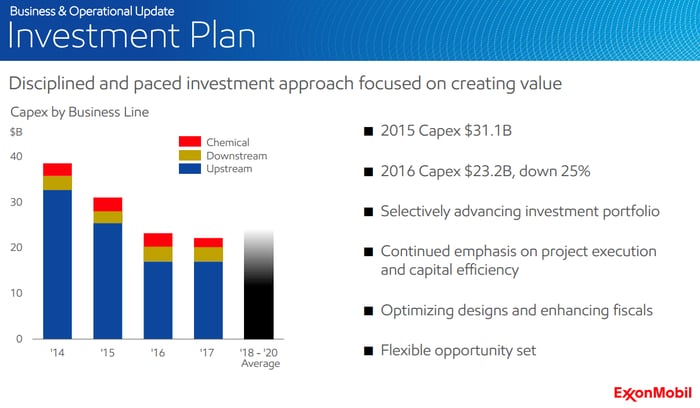 With shares trading at 2.2 times tangible book value, shares of ExxonMobil aren't the cheapest on this list and, like Chevron, it's a bit above the lows we saw earlier this year. However, shares have regularly traded well above this rate for close to 20 years, which suggests that there is still some value to picking up shares today.