Rumors that Apple (NASDAQ:AAPL) would ditch its headphone jack on the upcoming iPhone 7 recently gained steam when The Wall Street Journal reported Apple really is planning to keep it off the tech giant's next smartphone. While the move may initially seem borderline hostile toward users, there are ways the user experience can benefit, too. Indeed, even before Apple has confirmed it will actually move on from the 3.5mm headphone jack, maker of analog and digital signal processing products Cirrus Logic (NASDAQ:CRUS) already seems to be on board with the port's evolution.

The benefits of Lightning-based headphones

The MFi Headset Development Kit demonstrates the advantages of Lightning-connected headsets over conventional analog headsets. For example, digital connectivity with an integrated, high-performance DAC and headphone driver delivers high-fidelity audio to the headphone speakers. In addition, Lightning-connected headphones can interact with an iOS app to create a more custom audio experience, such as personalized EQ settings. 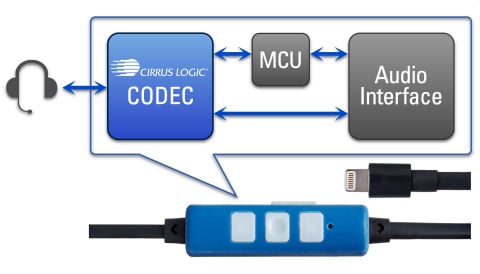 Cirrus Logic Vice President of Audio Products Marketing Carl Alberty even went as far as to say that a "Lightning-based interface ... is creating opportunities for [original equipment manufacturers] to innovate in product design and is accelerating the transition from analog- to digital-connected products within today's billion-unit headset and headphone market."

The downside, of course, to the removal of the 3.5mm headphone jack from the iPhone is that users will need adapters to use their current headphones. While Apple could easily opt to minimize friction of having to do this by including an adapter as standard with a purchase of an iPhone 7, there's no way to address the fact that users would need to carry an extra piece of hardware with them in order to connect their 3.5mm-based headphones to the iPhone 7.

Still, as headphone manufacturers and headphone suppliers begin to explore Lightning-based headphone technology, it's increasingly clear there may be more positives to moving on from the 3.5mm headphone jack than initially thought.

Another sign Apple really is ditching the headphone jack?

Interestingly, the wording in Cirrus Logic's press release seemed to support rumors that Apple really is ditching the headphone jack with the iPhone 7. The headset development kit is "designed to help OEMs quickly develop new Lightning-based digital headsets," (emphasis mine) Logic noted. It's as if Logic foresees that a new popular mobile device will spark a surge in development of Lightning-based headphones.

It's not unlike Apple to be the first OEM to ditch or evolve a key hardware port on its devices. Apple has always been at the forefront when it comes to the evolution of ports. For instance, Apple led the charge when it came to removing floppy disk and optical CD drives. And the tech giant was also quick to move on from the 30-pin connector to the Lightning port. More recently, Apple has continued to demonstrated its aggressiveness in eliminating ports with the introduction of its USB-C, which combines the capabilities of multiple ports into one.

As the rumored 3.5mm jack-free iPhone 7 is beginning to look all but certain, it's comforting to know the move away from the old technology will at least represent an upgrade in the listening experience.

Is it possible this is the first move that will help consumers someday look back at the 3.5mm headphone jack in the same way we view the antiquated floppy disk today?