Ford's SUVs are selling well, and Lincoln is surging; here are some bright spots -- and how competition is heating up.

Investors have always hoped China would turn into a second large pillar of revenue and profit for Ford Motor Company (F -3.46%). The reasoning is two-fold: It would generate a lot of incremental top-line and bottom-line growth, as well as reduce Ford's reliance on the North American market for the majority of its financial success.

Briefly looking at the first quarter of 2016, Ford's success in China drove its Asia Pacific region to strong gains. The latter's wholesales were up 9% compared to the prior year, with an 18% jump in revenue thanks to a favorable mix -- or, in other words, more SUVs selling. Ford posted a massive 360 basis point improvement in its operating margin to reach 8.2% and increased its pre-tax profits by 110%, to $220 million. That's a strong quarter, to be sure.

With that said, here's a look at how Ford's first-half results in China ended up now that sales data from June is officially in the books. Hint: It should mean another solid quarter for Ford's Asia Pacific region.

Starting from the very top, including Ford's mainstream brand, Lincoln, and its joint ventures, Ford's sales topped 577,000 units during the first half of 2016. That was good enough for a 6% increase compared to the prior year.

Looking specifically at June's results for Ford and its joint ventures, not including Lincoln sales this time -- more on that later -- the automaker tallied just over 85,100 units sold, which was good enough to edge out a 3% gain over the prior year. 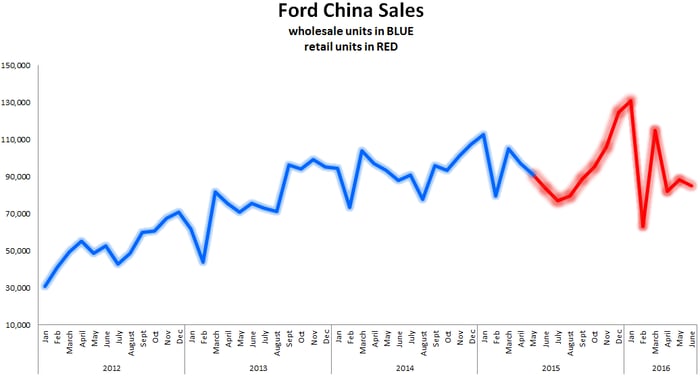 "We continue to see solid growth in China during the first half," said Dave Schoch, Ford Motor Company group vice president and president of Asia Pacific, in a press release. "Even as the pace of growth slows and the market matures, customers continue to respond well to our products, particularly our world-class SUV lineup."

There were a couple of encouraging trends in Ford's China data. First, and a great sign for Ford's bottom line during the second quarter, is that demand for its SUVs continued to be strong throughout the entire first six months of 2016.

Sales of the EcoSport, Kuga (Escape), Everest, and Explorer, as well as Lincoln's MKC, MKX, and Navigator, combined to surpass 150,000 vehicles. That was a large, 27% sales gain over the first half of 2015. Individually, the Edge had a pretty impressive six months, with its sales passing the 50,000 mark. The Explorer, on the other hand, didn't chalk up nearly the volume the Edge did, but it managed to grow its sales almost 50% compared to the first half of last year to 6,884 units.

A second bright spot in Ford's data was definitely its Lincoln luxury brand. China is arguably the most important market for Ford's luxury brand for a couple of reasons. First, the Lincoln brand name has faded in America, and it will take some time to turn that around. However, the Chinese consumer perceives the Lincoln brand much differently.

"It's different in the U.S. than in China," Kumar Galhotra, head of Lincoln, said of the brand's standing in a January interview with Bloomberg. "In China, our heritage plays very strong. Our favorable opinion in China is actually ahead of Lexus and on the factor of prestige, we're actually ahead of Audi."

That's great news, because Ford has opted not to roll out Lincoln into Europe, fearing it would be extremely difficult or costly -- probably both -- to compete against Europe's powerhouse luxury automakers on their home turf. That means outside of the U.S., China is Lincoln's primary growth engine.

On that note, it was encouraging to see Lincoln's sales gain traction in China thus far into 2016. During the second quarter, Lincoln sold nearly 7,000 units in China, which was a 160% gain compared to the prior year. During the first half of the year, Lincoln's sales reached 12,450 units, a gain of more than 190% -- almost triple last year's sales, and already topping 2015's full-year mark.

On the flip side

While Ford is continuing to grow sales in China with its mainstream brand, and its Lincoln brand is gaining traction, it's clear through the first six months of 2016 that the auto industry will be a dog fight. For instance, even though Toyota's sales slid 3.4% during June, it still sold more units than Ford, tallying more than 97,000 sold. And despite the speed bump Toyota hit in June sales, its first half was very strong. Toyota's sales in China rose 16% to 592,100 vehicles, compared to Ford's 6% gain to just over 577,000 units.

Toyota wasn't the only Japanese automaker making noise in China, either. Honda Motor Co. is coming on strong with a 32% surge in deliveries last month, to 96,692 vehicles. Thanks to increasing demand for its Vezel and XR-V compact crossovers, Honda sold 18% more vehicles during the first half of 2016, compared to the prior year, to reach 542,527 units.

While Ford continues to tally sales and expand its SUV and luxury presence in China, if it wants to continue expanding margins and pre-tax profits in its Asia Pacific region, it can't waste a second resting on its laurels. The automotive market in China is going to be highly competitive going forward.