In a mixed day for indexes, these stocks stood out from the rest.

Stocks hardly budged on Friday. The Dow Jones Industrial Average (^DJI) added less than 10 points for effectively no change from Thursday's close. The broader S&P 500 (^GSPC -0.19%) declined by two points, or 0.1%, to narrowly miss its first five-day streak of consecutive records since November, 2014. 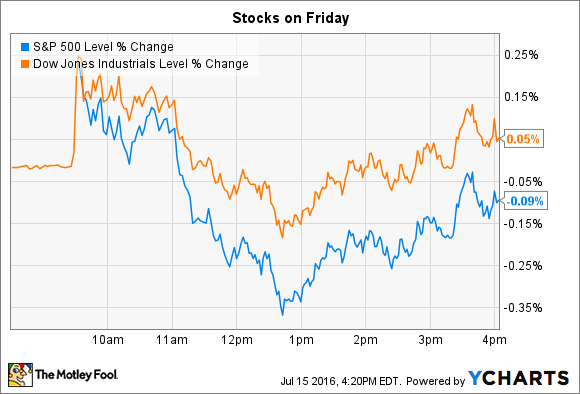 In economic news, consumer spending rose by 0.6% last month, the government said, surprising economists who were predicting a more-modest 0.1% uptick. Winners in the report were home and garden supply stores and online retailers, while clothing sellers continued to struggle, and saw a sales decline.

As for individual stocks, both Herbalife (HLF -3.37%) and Wells Fargo (WFC -2.19%) attracted heavy trading following important news on their businesses.

Herbalife shares spiked by as much as 14% on Friday before settling to a 10% return on news that it settled a long-running investigation by the U.S. Federal Trade Commission over its business practices. The FTC levied a $200 million fine against the company, and had plenty of harsh words to say about its operations, including that Herbalife had "deceived consumers into believing they could earn substantial money selling diet, nutritional supplement, and personal care products."

As part of the settlement, Herbalife will need to restructure its U.S. operations and change the way it markets its products and compensates its distributors. "Herbalife is going to have to start operating legitimately," FTC Chairwoman Ramirez said in a press release, "making only truthful claims about how much money its members are likely to make." The $200 million fine will go toward compensating consumers "for the losses they have suffered as a result of what we charge are unfair and deceptive practices," Ramirez said.

Herbalife is happy to put the investigation behind it, and in its own press release said the agreement allows management to turn its focus back to growing the business. It also directly addressed bearish investors who have questioned its entire business model, saying that it hopes "those who have shorted the Company's stock will finally understand their thesis is misinformed and flawed."

Banking giant Wells Fargo slipped nearly 3% after posting second-quarter earnings results that broadly met expectations, but included a decline in profitability. Revenue rose 4% as earnings ticked down from $1.03 per share in the prior year period to $1.01 per share.

On the plus side, Wells Fargo enjoyed a 9% boost in its loan portfolio, which grew to nearly $1 trillion at an average yield of 4.16%. The biggest gains were in its commercial and industrial loans, which expanded at a double-digit pace. Deposits ticked up 1%, to $1.2 trillion, although the bank continued to earn next to nothing on these balances, as interest rates hovered near 0%.

Offsetting some of those gains was an increase in loan charge offs, which rose 4% on weakness in credit quality for the oil and gas industry. Yet management said the overall steady results were a testament to its diverse business model. "Wells Fargo's second-quarter results demonstrated our ability to generate consistent performance during periods of economic, capital markets and interest rate uncertainty," CEO John Stumpf said in a press release.

Nonetheless, Wall Street appeared to be hoping for higher profits in light of peer JPMorgan Chase's earnings beat on Thursday, and pushed the stock lower despite WFC's solid results.

Demitrios Kalogeropoulos has no position in any stocks mentioned. The Motley Fool owns shares of and recommends Wells Fargo. We Fools may not all hold the same opinions, but we all believe that considering a diverse range of insights makes us better investors. The Motley Fool has a disclosure policy.