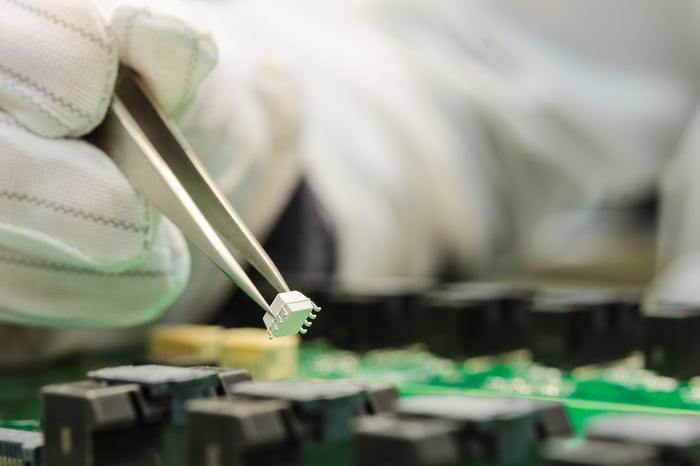 The smartphone market is maturing, which is making it hard for component suppliers like Skyworks Solutions (NASDAQ:SWKS) to continue to grow at a rapid rate.

We knew that this was going to be a particularly challenging quarter for every smartphone supplier that counts Apple (NASDAQ:AAPL) as a major customer. The Mac maker had telegraphed that it was planning to significantly reduce its channel inventory. Last year, Apple comprised about 44% of Skyworks' total revenue, so that news caused management to warn investors that its top line was about to head in reverse.

When Skyworks released its fiscal third-quarter results on Thursday, July 21, it was able to best its own expectations, but with shares falling the next day, there was clearly something in the report that the markets did not like.

Let's take a closer look at Skyworks' results to see what the market is reacting to and check in on how the company is performing in the three areas that I suggested were worth watching closely.

As you can see, nearly every important financial metric was headed in the wrong direction this quarter. However, it's worth noting that these results were slightly ahead of management's guidance of $750 million in revenue and $1.21 in EPS.

Despite the revenue decline, management continues to do a good job of managing its cost structure. Skyworks' gross margin jumped 190 basis points, to 50.9%, when compared to the year-ago period, and operating margin came in at a very healthy 36%.

As you'd expect, management did its best to put a positive spin on the company's performance. Here's what Skyworks CEO Liam Griffin had to say about the quarter:

Skyworks exceeded expectations in the third fiscal quarter of 2016 driven by increasing global demand for high-speed connectivity coupled with strong operational execution. Our highly integrated solutions are enabling a broad array of applications ranging from streaming media to e-commerce to cloud-based services.

Skyworks realizes that its huge dependence on Apple isn't a good thing, so it has been pushing hard to diversify into new growth markets. The company has set an ambitious goal to become a leader in the Internet of Things trend, which could open plenty of new sales channels.

As usual, management called out a handful of selling highlights during the quarter, which included a few design wins from the automotive sector. In addition, the company provided technology that enabled other companies to launch new products in the wearables, industrial, and connectivity markets.

With Skyworks' share price stuck in a downward trend over the past year, management once again amped up its share-repurchase activity. The company reported that it repurchased 3 million shares of its common stock during the quarter, and it looks like more buybacks are on the way since its board has authorized a brand-new $400 million share buyback plan.

In addition, the company announced that it is increasing its dividend payment by about 8%. Its new quarterly payout will be $0.28 per share, or $1.12 per year.

As usual, Skyworks provided investors a forecast of what they could expect in the upcoming quarter.

Here's a look at what management is guiding for in the fiscal fourth quarter.

As you can see, the slowdown in smartphone sales is expected to continue to weigh on the company's results into the current quarter. I'm guessing that projections of another down quarter are contributing to the company's share-price weakness today.

If you're looking for a silver lining here, this forecast does represent sequential sales growth of more than 10%, which could hint that the worst of the slowdown is in the rearview mirror. In addition, both gross and operating margins are expected to continue their expansion, and management believes that it is still on track to achieve its long-term gross-margin target of 53%.

Still, Skyworks investors have become accustomed to seeing the company produce strong double-digit growth, so perhaps it's not surprising to see the stock taking a step back the day after earnings.