Exact Sciences (NASDAQ:EXAS) may have inflicted a lot of pain on shareholders last year, but a batch of good news since June has sent shares soaring. Can Exact Sciences continue to grow sales for its innovative colon-cancer test, or will the rally prove to be short-lived? Here are three reasons investors are hot on this stock right now. 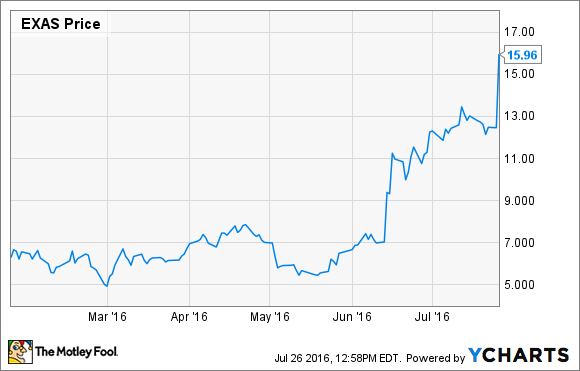 Exact Sciences is trying to revolutionize how patients get screened for colon cancer, one of the deadliest cancers. Despite colon cancer being far more easily cured when it's discovered early, only 60% of U.S. patients who should be screened for it actually do so.

Ninety percent of colon cancer patients survive at least five years when colon cancer is caught within the first two of its four stages. However, only 10% survive that long if it isn't found until it's reached stage four. Sadly, six out of every 10 cases of colon cancer aren't found until stages 3 and 4, and that means that there's a massive need for new options that might boost patient screening.

FOBT tests and fecal immunochemical tests (FIT), a more sophisticated variation of FOBT, look for blood in stool samples; however, they're not as accurate as other methods. Sigmoidoscopy and colonoscopy can be more accurate, but they're both far more invasive, requiring the insertion of a thin tube-like instrument into the colon through the rectum. (A colonoscopy, the gold standard of colon cancer screening, examines the entire colon; a sigmoidoscopy involves only the portion nearest the rectum.) In addition to being invasive, sigmoidoscopy and colonoscopy are expensive too.

Cologuard patients prepare a stool sample at home and mail it to Exact Sciences. When the sample arrives at Exact Sciences, the company's lab technicians evaluate blood and DNA of cells shed in the stool to determine if there are any markers present that suggest colon cancer.

Cologuard's advantages are resonating with doctors, and thanks to a direct-to-consumer marketing program, Cologuard is beginning to win fans among seniors who should be screened too.

That's a lofty goal, but it may be easier to achieve now that colon cancer screening guidelines have been updated by the U.S. Preventative Services Task Force, or USPSTF. The USPSTF updated its guidelines in June to recommend screening for all seniors between age 50 and 75 and, rather than recommending any particular screening method, the group decided to put all screening methods on an equal footing.

Since Cologuard arguably offers advantages that may boost patient follow-through with screening, healthcare providers are prescribing it more often and insurers are becoming more willing to reimburse for it.

Previously, payers had been slow to negotiate reimbursement deals with Exact Sciences; that, coupled with the company's hefty spending, led to short sellers betting against roughly a third of all of the float -- the Exact Sciences shares that are available for trading. Ahead of the company's second-quarter earnings this week, short sellers were sitting on 31.5 million shares short, up from 20.9 million shares a month ago. 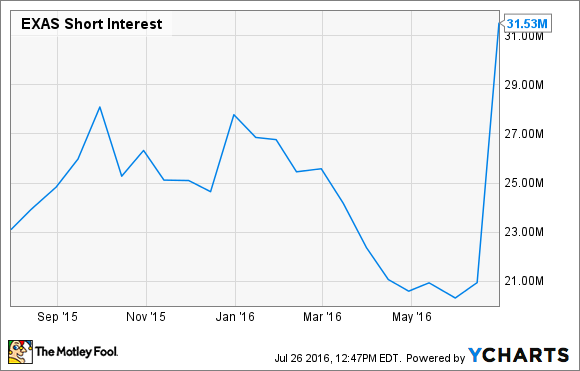 Short sellers' bet against Exact Sciences, however, isn't paying off. In the second quarter, the company completed 54,000 Cologuard tests, up from 40,000 in Q1.

The second-quarter test volume was larger than the company's internal forecast, and it appears to put the company on pace to hit its target of 240,000 for the full year. If so, then Exact Sciences shouldn't have trouble delivering on outlook for at least $90 million in sales this year. Last quarter, revenue per test improved to $391 million from $370 million in the first quarter; if we multiply that figure by the target number of tests remaining for this year, we end up with an additional $57.1 million in sales over the next two quarters. Add that projection to the $36 million the company hauled in during the first six months of 2016, and you get projected sales of $93.1 million this year.

Exact Sciences estimates Cologuard's addressable market is $4 billion, but we're admittedly a long way away from that figure, and the company's expenses remain sky-high. In the second quarter, management forked out $56 million on operating expenses, up from $42 million in the same quarter a year ago; as a result, the company lost $45 million last quarter and $93 million through the first six months of 2016. There's no indication of when the company could become profitable, and industry-watchers think the company will lose $2 per share this year and another $1.64 per share next year.

Nevertheless, risk-tolerant investors might not want to shy away from Exact Sciences because of its losses. There's unquestionably a big need for testing, especially as the 65 million baby boomers get older, and the company's got some financial wiggle room, thanks to improving cash flow and $224 million in cash and securities on the books. That should be enough cash to get it through at least another five quarters at current cash burn rates. Assuming test volume accelerates from here, it's likely that cash will last a lot longer than that. Therefore, investors might want to focus a bit less on the losses for this stock, and more on the growth.