There's a reason some people refuse to spend money on lottery tickets: With a one-in-292 million shot of winning a grand prize, you have a better chance of getting struck by lightning than walking away with a life-changing sum of money. But on the very, very off-chance that you do win a major Powerball prize, deciding how to collect that cash can be a major dilemma. If your ticket contains those winning numbers during the next Powerball drawing, then you'll have two options: take a lump sum payout, which means getting all of your money at once, or take an annuity and receive that money in increments over time.

So which should you choose? It depends on a number of factors. 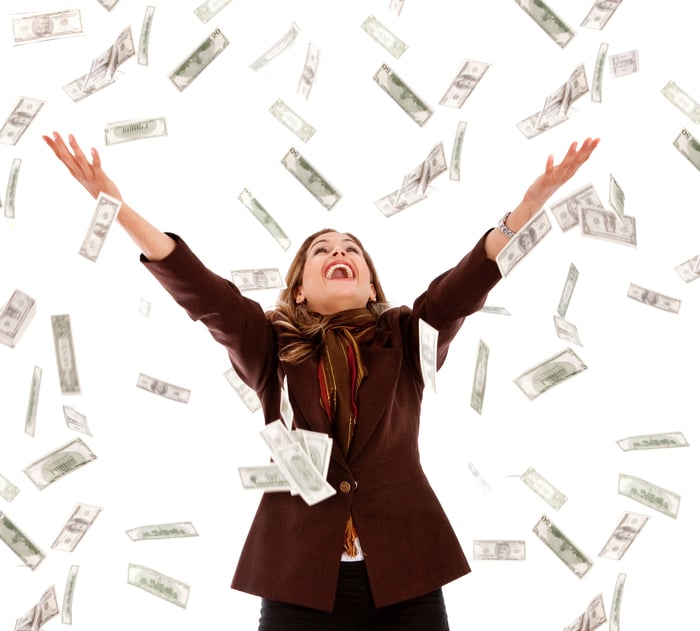 With a lump sum payout, you'll get a larger amount of money up front than you would with an annuity, which pays you your winnings over time. However, if you go with the lump sum, you'll wind up receiving less money in total than you would via an annuity. You see, lottery winners who opt for the lump sum payout always get less than the reported jackpot amount. The reason? Lottery officials take the time value of money into account and come up with a net present value calculation to arrive at an immediate lump-sum figure. Add in taxes, and you'll come away with much less money than the amount advertised.

On the other hand, if you choose an annuity, you'll wind up getting a larger amount of money than the lump sum would give you. Furthermore, with an annuity, rather than pay taxes on your entire winnings up front, you're taxed on the smaller amount you receive each year.

Taxes play a major role in the lump sum-versus-annuity debate. If you opt for a lump sum, you're likely to pay more taxes -- first, because you're getting taxed on a greater amount at once, and second, because you're paying taxes not just on your initial payout, but on any money you make from investing it. With a Powerball annuity, you're not getting taxed on your investment income, because Powerball is actually investing that money, and it doesn't pay income tax.

Another thing to consider is how tax rates will evolve over time. Tax rates might go up, stay the same, or even go down, and any change would affect you if you took the annuity. If you're worried that tax rates will go up over time, then you might want to stick with the lump sum. This way, you know what you'll pay in taxes, and there won't be any surprises down the line. On the other hand, if you have reason to believe that tax rates might go down, by all means, go with the annuity.

If you take a lump sum payout, you'll get the chance to invest that money and watch it grow into an even larger sum. But are your investments likely to outpace the returns offered by an annuity? According to Vanguard, the answer is yes: Its research shows that 66% of the time, investing a windfall immediately brings in higher returns than investing smaller, fixed dollar amounts over time. Of course, investing on your own is a more risky prospect than taking the annuity and the guaranteed stream of income that comes with it, so you'll need to weigh that risk against the potential upside of investing that lump sum.

Will you blow that money?

You'll also need to consider your own behavior when deciding between a lump sum payout and a Powerball annuity. An estimated 96% of Powerball winners take the lump sum payout, yet almost 70% of lottery winners wind up broke within seven years. If you've struggled to manage your money in the past, then taking the annuity is a safer bet.

Of course, there's a hybrid option that might help you settle this debate: taking the lump sum payout and investing it in your own annuity. If you go that route, then you might generate a higher return than the Powerball annuity would give you, as Powerball invests in government bonds with relatively low rates of return. At the same time, you won't have to worry about blowing all of your winnings at once.

Though the temptation to play the lottery can be strong, keep in mind that your weekly ticket can also be a major budget-buster. Americans spend an estimated $70 billion a year on lottery tickets -- that's more than $230 for every man, woman, and child in the 43 states where lotteries are legal. While there's nothing wrong with playing the lottery on occasion, given your abysmally low odds of winning, you're much better off taking that money and investing it instead.

That said, if you do happen to come away a winner, having to choose between an annuity and a lump sum payout is a pretty good problem to have. Just remember: You stand to walk away with a lot of money no matter which option you choose, and as long as you save and invest that money wisely, there's a good chance you'll wind up set for life either way.

Should You Take a Powerball Annuity or Lump Sum Payout? @themotleyfool #stocks Next Article
Current