The Internet of Things (or IoT) will be worth an estimated $7.1 trillion by 2020, according to IDC, and will include nearly 50 billion devices by that time.

Investors looking for IoT stocks to invest in right now have plenty to choose from, but Amazon.com (NASDAQ:AMZN), NXP Semiconductors (NASDAQ:NXPI), and Alphabet (NASDAQ:GOOG) (NASDAQ:GOOGL) should receive some particularly serious consideration. 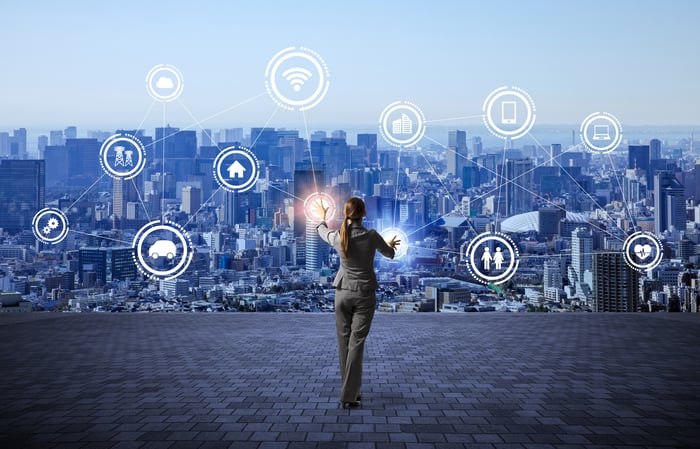 No, you haven't missed the Amazon boat. Yes, the stock does seem expensive at 190 times earnings right now. But to overlook Amazon as an IoT investment could be a mistake for a few key reasons.

If you weren't aware, Amazon is already killing it in the cloud computing world. The company earned $2.88 billion for its Amazon Web Services (AWS) in Q2 2016, an increase of 58% year-over-year. Re/code wrote earlier this year that AWS is on its way to becoming a $10 billion-a-year business.

Amazon isn't just offering services for the broad cloud computing market, though. It's also targeting the IoT, specifically with its AWS IoT platform. AWS IoT allows companies to build applications for IoT devices and connect them to other Amazon web services (naturally).

The success of AWS doesn't exactly means AWS IoT is a guaranteed winner of course. But Amazon is integrating its AWS IoT platform with its other AWS services, and as more IoT devices come online, I think users will seamlessly transition between to the two.

Secondly, Amazon is already winning over the consumer market with its Echo home speaker, powered by its Alexa virtual assistant. No, Alexa isn't perfect in answering questions, but it isn't just a novelty either.

Amazon opened up Alexa to third-party developers, and you can already order a pizza or hail an Uber through it. It can even pair with some Mercedes vehicles and Nest thermostats to adjust the temperature as you approach your home.

Lastly, Amazon's integrated its Dash Replenishment Service (DRS) into appliances like Whirlpool washing machines so they can reorder detergent automatically from Amazon's site. That may seem like an excessive feature now, but in the near future many of our online orders will be set automatically, and getting appliances to do it for us will be part of that.

NXP makes semiconductors for a variety of mobile devices and automotive companies. But the company has recently taken two big steps into the self-driving automotive space (which is part of the IoT), that could eventually pay off for investors.

The company purchased Freescale Semiconductors earlier this year, placing the company firmly in the automative space with about 14.5% of the automotive chip market. The combined customers from both companies now make NXP the leading chip supplier for carmakers.

Driverless cars require a lot of processing power and will require a lot different components working together. NXP's position in the automotive semiconductor space right now makes its a perfect candidate for helping to power future driverless technologies.

Additionally, NXP unveiled its own self-driving car technology last month, which makes it easy for automakers to bring their own driverless cars to market. The off-the-shelf BlueBox system comes with sensors, radar, lidar, and NXP's semiconductors.

It's a big step for NXP in the driverless car business, and it comes just as automakers are looking for inexpensive ways to bring semi-autonomous vehicles to the masses.

I know, it seems a bit cliche to list one of the world's biggest technology companies as a good bet for the IoT, but hear me out.

Alphabet grew revenue by 21% year-over-year in its most recent quarter, and its net cash now tops $70 billion. That's impressive on its own, but Alphabet is reinvesting the money it makes from online advertising into lots of new projects, and many of those include IoT-focused initiatives.

The company's Google Car is probably its most well-known IoT project. Google's already driven more than 1.5 million miles with its autonomous cars, and recently partnered with Fiat Chrysler to test its software in 100 of the automaker's Pacifica minivans.

Google's already making big strides into IoT devices as well. Its Nest company has had its fair share of problems lately, but still has a strong connected-home brand with its smart thermostat and security cameras.

Similarly, Google recently announced its new smart speaker, called Home, with Google Assistant. Once the device goes on sale later this year, Google will have its own Echo-like competitor -- with the backing of Google's search engine.

If all that weren't enough, Alphabet's moonshot projects include IoT-focused initiatives like using nanoparticles to find diseases in the bloodstream and send signals back to wearable devices on their findings.

Alphabet is sure to have some IoT misses along the way. But its mountain of cash and diversified projects should be more than enough to keep the company at the forefront of the IoT.

There are plenty of other Internet of Things stocks to invest in, but these companies are already making big moves now, and are poised for even more growth. The IoT's massive potential shouldn't be overlooked by investors, and Amazon, Alphabet and NXP Semiconductors should certainly be on investors' short lists.