If you look at steelmakers Nucor (NYSE:NUE) and Steel Dynamics (NASDAQ:STLD) and their 8.5% and 9.5% July gains, respectively, you'd think steelmakers had a decent month. But when you see that ArcelorMittal (NYSE:MT) and AK Steel (NYSE:AKS) were each up 40%, you start to realize it was a really good month, capped by United States Steel's (NYSE:X) 60% gain. Here's what's behind those really big share price moves.

A harbinger of good times

In mid-June, Nucor announced that it expected second-quarter earnings would come in above analysts' consensus expectations. Key highlights from Nucor's update included a reduction in imports, related to trade-case wins, higher steel volumes, and higher realized steel prices. That good news set the stage for the steel industry's second-quarter earnings season and helps explain why the entire sector was higher through the first part of July.

And then the really good news started to roll in, as steel companies began reporting earnings results at the end of the month. On July 18, Steel Dynamics (NASDAQ:STLD) reported that its sales were flat year over year, but up nearly 18% from the first quarter of this year. Earnings, meanwhile, were $0.58 a share, up from $0.13 a year ago and $0.26 in the first quarter. The company also provided a positive outlook for the third quarter on pricing, even though it was a little less excited about the prospects for demand. 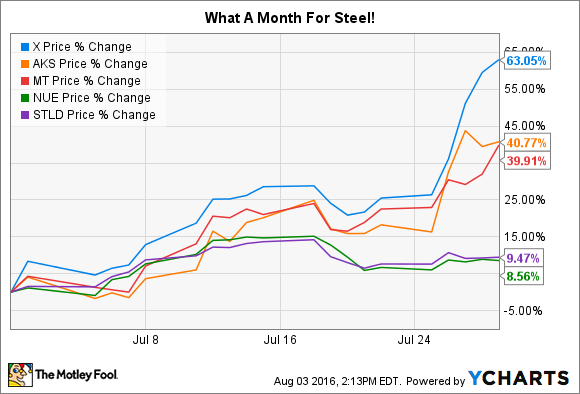 Next up was Nucor, which announced earnings that beat its own guidance by three cents on July 21. The U.S. steel giant's sales were down slightly year over year but were up roughly 15% compared with the first quarter. Earnings came in three cents above the company's own guidance range, at $0.73 a share. And Nucor suggested that the positives it highlighted when it pre-announced earnings in mid-June would carry over into the third quarter.

But these two steel players have been relatively strong performers throughout the industry downturn that's been in place since the 2007-to-2009 recession. Harder hit have been U.S. Steel, AK Steel, and ArcelorMittal.

U.S. Steel and AK Steel both reported on July 26, and the news was pretty good from each. U.S. Steel lost $0.32 a share in the quarter, but that was a huge improvement over the loss of $1.79 a share in the year-ago period and the $2.32 worth of red ink in the first quarter. More important, however, is that the company painted a very positive picture for the rest of the year, expecting net earnings of $0.34 a share. And that outlook is based on the current industry conditions remaining as they are, not further improvement. No wonder the shares rallied roughly 20% between the earnings release and the end of July.

AK Steel, meanwhile, posted earnings of $0.08 a share in the quarter, up from a $0.36-per-share loss in the year-ago period and an $0.08-per-share loss in the first quarter. More important, industry watchers had been expecting the company to post a $0.02-per-share loss in the quarter. Although AK Steel's shipments were down year over year, it highlighted a shift toward higher-margin products as a main contributor to its success. The company's shares rose 6% through the end of the month. Although that may not sound like a big gain, it was notably better than Nucor and Steel Dynamics, which were basically flat over the same span.

Then on the 29th, ArcelorMittal reported that it had earned $0.38 a share, up from $0.10 last year and a loss of $0.23 in the first quarter. Although earnings were solid, the big news for ArcelorMittal was debt reduction. The company trimmed its debt load from $17.3 billion at the start of the quarter to $12.7 billion at the end of the quarter using cash from a rights offering.

The company's debt, particularly its near-term maturities, had been an overhang on the company's stock. That said, the global steel giant's earnings provided a nice end to the month. It closed out July with a 7% rally after AK Steel and U.S. Steel reported solid results. Investors were obviously looking for a hat trick from the industry's hardest hit players.

The rally in steel stocks in July, which understandably gained speed for a few names toward the end of the month, makes complete sense based on the solid results out of some of the industry's biggest names. That said, U.S. Steel, AK Steel, and ArcelorMittal's advances were huge by any standard, and you probably shouldn't expect gains like that every month. But that doesn't mean you shouldn't be pleased with the more positive picture taking shape in the hard-hit steel sector.