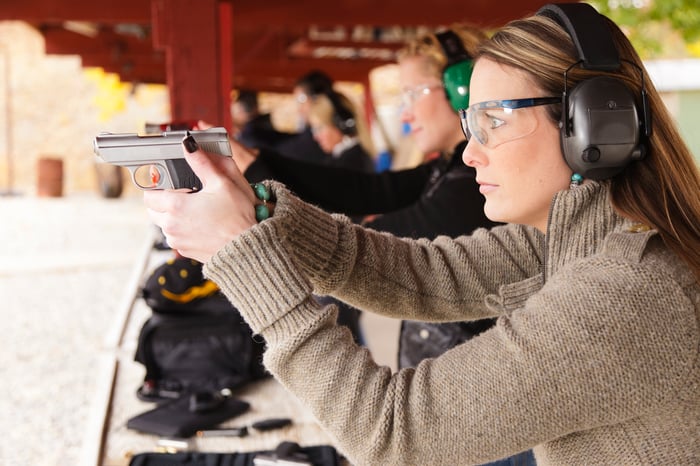 Personal protection has been a primary reason behind higher gun sales, but that may change in the months ahead. Image source: Getty Images.

Shares of gunmaker Sturm, Ruger (NYSE:RGR) may have dipped last week after it surprised the markets by announcing its CEO was retiring next year, but now is not the time for investors to be selling. You can expect both Ruger and fellow gunslinger Smith & Wesson Holding (NASDAQ:SWBI) to gain over the next few months as the 15-month surge in gun sales continues well into the foreseeable future.

Ruger's second-quarter earnings results showed firearms sales jumped 20% in the period and are up 23% year to date. While Smith & Wesson is expected to report its own financial performance in the next few weeks, its fiscal fourth quarter and 2015 results posted in June tell a similarly positive story: Quarterly sales were 22% higher, while full-year sales jumped 31%.

There's good reason both publicly traded gunmakers have been shooting out the lights: The FBI has been working furiously to keep up with the demand for guns. Last month, it conducted almost 2.2 million criminal background checks of individuals wanting to buy a firearm, a record for the month of July. But it's getting accustomed to the workload as every month since May 2015 has broken previous records. The law enforcement agency ended up performing 23.1 million investigations last year, more than at any time in the past, but it's on track to far surpass that number in 2016, having already conducted 32% more investigations this year than it did at the same time a year ago. 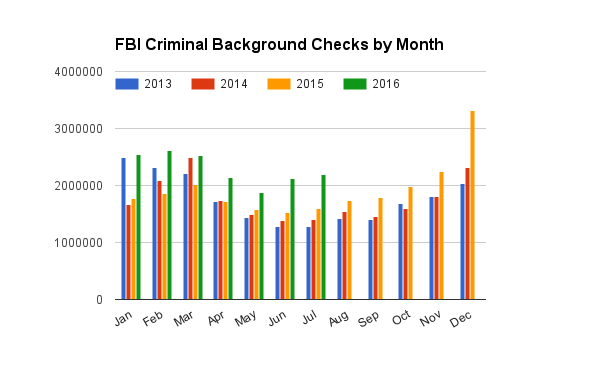 The FBI has been working double time to keep up with the pace of demand for background checks from gun buyers. Data source: FBI. Chart by author.

And it's only going to get more intense in the months ahead.

As the presidential election comes down to the wire, the possibility of Hillary Clinton winning the presidency will stoke fears that she will attempt to enact tougher gun ownership laws, and that will drive more even people to buy guns now, pushing demand for firearms higher.

It's important to note that Hillary Clinton hasn't said she wants to ban guns. On the contrary, her campaign's policies have centered around keeping them out of the hands of only certain people, such as domestic abusers, the mentally ill, and violent criminals -- prescriptions many gun rights advocates wouldn't necessarily argue with. But her other policies are a cause for concern among gun owners, such as holding the gunmakers responsible for gun crime and closing the "gun show loophole" even though there isn't one -- you can't buy a firearm at a gun show without getting a background check. These positions indicate to gun owners and enthusiasts an animus toward lawful firearms ownership.

It was a similar situation when Barack Obama ran for and was elected president. Although no major federal legislation was ever enacted, with even his much publicized executive orders at the beginning of the year being fairly watered down, he was still recognized as "the greatest gun salesman in history."

In more recent periods, firearms sales have been more the result of concern for personal safety as riots, civil unrest, and acts of terrorism both foreign and domestic have heightened public awareness over the need for and the utility of firearms, such that concealed-carry weapons like Smith & Wesson's Shield brand of handguns continue to be more popular than ever. Still, though, a political campaign where gun control will increasingly be front and center will drive more people to buy guns sooner rather than later.

Sturm, Ruger has pledged to donate to the NRA up to $5 million between now and Election Day on November 8, contributing $2 for every gun sold between now and then, which highlights the importance it places on the election (it is not, however, saying to vote for or against any one political candidate). Smith & Wesson is donating $500,000 to the National Shooting Sports Foundation to fight a Massachusetts ban on modern sporting rifles.

Trying to time an investment based on how you think the market will perform is never a good strategy, and politics can always cause upheavals, but there are plenty of factors present here that only speak to increased demand for firearms in the months ahead, and that can only drive sales of Smith & Wesson and Sturm, Ruger higher. Selling your stock in either of them now would would completely miss the target of maximizing your investment's return.