Fertilizer stocks have had anything but an easy existence in the last several years. The industry expanded production capacities exactly as broader commodity prices collapsed in late 2014. Prices for each of the big three agricultural nutrients -- nitrogen, phosphate, and potassium -- reached multiyear lows earlier this year as a result. But management teams at several of the largest manufacturers, including The Mosaic Company (NYSE:MOS), are eyeing a turnaround soon, perhaps beginning sometime in the second half of 2016. If and when the market finds a new equilibrium, investors could be poised to reap the rewards. With that in mind, here are three reasons The Mosaic Company's stock could rise.

Have prices bottomed out?

On the recent second-quarter conference call, The Mosaic Company disclosed that average selling prices of its two main products, phosphate and potash, fell 24% and 36%, respectively, compared to the year-ago period. That was a major factor contributing to the company's net loss of $10 million for the quarter, compared to a net profit of $391 million in the year-ago quarter. It was the company's first quarterly loss in nearly 10 years. Did I mention that the current market environment is pretty difficult?

However, President and CEO Joc O'Rourke provided a glimmer of hope to investors on the conference call, saying, "While the environment is challenging, we see signs of stabilization in the second half of the year, with fertilizer prices bottoming and solid demand for our products." He may have a point, especially considering that talks with China and India, which usually set the tone for the entire market, took longer than expected to finalize in 2016 but are now in the rearview mirror.

Still, investors should know there's a slight catch: The company guided for slightly lower prices of both phosphate and potash in the third quarter with the hope that prices turn in the right direction in the fourth quarter of the year. It may be difficult to remain patient for a few more quarters, but there could be clear skies on the horizon.

Many things contributing to currently difficult market conditions remain outside of The Mosaic Company's control, so management has sought to reign in the factors it can contain: expenses. On the second-quarter conference call, the company's full-year guidance was updated to reflect lower-than-expected costs across the business. Here's a simple summary of guidance moving forward:

Lower expenses, combined with potentially higher selling prices, could set the stage for a positive surprise for investors to close out the year. The benefits of using capital more efficiently could extend into 2017 as well.

The Mosaic Company presents an intriguing case study in how stocks are valued. Unlike peers such as Potash Corp and Agrium, The Mosaic Company has yet to cut its dividend payouts despite the difficult market environment. It also trades at book value, whereas its two peers trade at nearly 1.7 times and 1.9 times book value, respectively. The relationship between the three stocks hasn't always been so skewed, but The Mosaic Company took a steep dive in this metric in mid-2015 and has yet to recover. 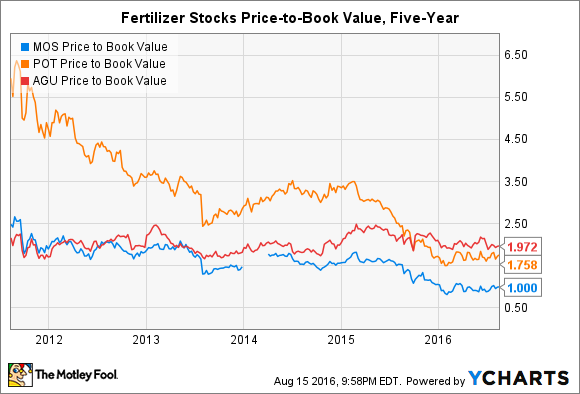 While only one metric in a sea of financial ratios and relationships, the chart above hints that The Mosaic Company stock could rise more than its peers if and when fertilizer prices start improving.

Fertilizer stocks still represent a speculative investment, but once prices begin increasing (permanently), investors will have plenty of reasons to be optimistic again. The current global glut in the market will have to removed through higher consumption of agricultural nutrients or higher costs caused by an increase in broader commodity prices. Of course, investors have no way to predict when or if either will occur, although The Mosaic Company's management seems to think conditions will improve soon. Either way, if you're looking at investing in a recovery in the fertilizer market, then The Mosaic Company stock could represent the best choice in the industry.