The steel industry has been in a deep downturn since the 2007-2009 recession. To suggest it's been a taxing time for the industry's key players, like Nucor (NYSE:NUE), United States Steel (NYSE:X), AK Steel (NYSE:AKS), and ArcelorMittal (NYSE:MT), would be an understatement. But even in the face of fierce competition and aggressively priced steel imports, there's one industry giant with plenty of cash. In fact, you'll probably be surprised to learn just how bit Nucor's war chest really is.

There's an old saying in finance that cash is king. That's particularly true during the hard times, when it can be difficult to get a loan because banks and bondholders are more worried about getting repaid than lending out more money. Say what you want about growth, but its cold hard cash that pays the bills.

So it can be an interesting exercise to look at a company's balance sheet in comparison to peers'. And in the steel industry, this quick take is pretty telling. Take a look at the table below:

The undisputed cash king here is ArcelorMittal, followed closely by Nucor. The dog of the bunch is AK Steel. But these numbers aren't as clean as you might think. Yes, ArcelorMittal has a lot of cash, but that's not the whole story.

One of the most stringent ways to examine a company's financial health is the cash ratio. It's a pretty simple measure, dividing cash and short-term investments by short-term liabilities. Essentially, this ratio asks the question, "Can a company pay its bills if there were no money coming in the door?" To be fair, this isn't usually that important, but it gives a better idea of what the cash balance really means.

For example, ArcelorMittal's cash ratio is 0.15 while Nucor's cash ratio is 1.2. So, sure, ArcelorMittal has more cash on its balance sheet than Nucor, but that clearly doesn't mean it's in better financial shape. Nucor, in this situation, is actually the stronger company. Here's the same list of steel companies from the above table showing their cash ratios:

The companies shifted around quite a bit, though AK Steel still brought up the rear. That, however, isn't surprising based on how little cash it had on hand at the end of the second quarter. Notice that Nucor isn't the leader. It's Steel Dynamics (NASDAQ:STLD), which has about half as much cash on its balance sheet as Nucor.

So, in some ways, Steel Dynamics is the cash king of the industry, even though it only ranks third on actual cash. Which brings us to the crux of the matter: scale. Steel Dynamics is a relatively young company in the industry, with a market cap of roughly $6.5 billion. It's a sizable business, but it pales in comparison to Nucor's $47 billion market cap. When you look at industry scale and cash, Nucor quickly becomes the cash king. 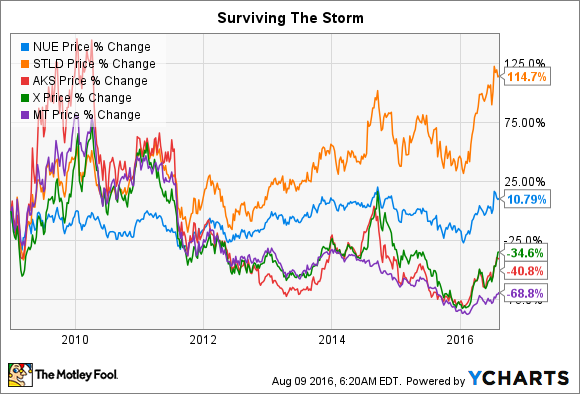 The benefit of cash is in what it allows you to do. In the case of steel, having plenty of cash has allowed Steel Dynamics and Nucor to survive the industry downturn in stride. Instead of worrying about paying the bills, this duo has been able to invest in new operations and acquisitions. And with so much cash, bankers, bondholders, and investors haven't had to worry about a cash crunch slowing the companies down.

The stock graph above shows that investors have clearly noticed the difference that flexibility offers. But it has an impact in other ways, too. For example, U.S. Steel has lost money in six of the last 10 years. AK Steel bled red ink in seven of those years. ArcelorMittal did a little better, posting losses in only four years over the past decade. Steel Dynamics lost money twice, in 2009 and 2015. Nucor only dipped into the red in 2009 -- it's been profitable every year since.

Although cash on the balance sheet doesn't make you profitable or unprofitable in any given year, it plays an important part in corporate decisions. In lean times, more flexibility means a company can make decisions with a longer-term view; it can ride out tough times while preparing for better days. Having too little cash -- well, that often leads to short-term decision making that can hurt a company's long-term prospects. Given the choice, would you rather own a company with plenty of financial flexibility or one that's struggling to make ends meet?