NVIDIA (NASDAQ:NVDA) is one of the year's best-performing stocks. Shares of the chipmaker have rallied nearly 90% in 2016, strongly outperforming the broader market. NVIDIA has turned in a steady stream of strong earnings reports. Meanwhile, excitement surrounding the company's future has intensified. NVIDIA appears well-positioned, standing at the intersection of several emerging trends, including artificial intelligence, autonomous vehicles, and virtual reality.

Still, risks remain for the GPU specialist. Investors interested in the company should be mindful of the factors that could undermine its performance.

NVIDIA's performance has been stellar in 2016, but investors may be getting ahead of themselves. The rally in NVIDIA's trailing price-to-earnings ratio -- a common measure of valuation -- has been just as significant as the rally in its share price.

In its fiscal year 2017 first-quarter report, NVIDIA's adjusted earnings per share rose 38% on an annual basis; in the second quarter, they rose 56%. Both are impressive figures, but they don't match NVIDIA's incredible share price appreciation. Back in February, NVIDIA traded with a slightly lofty P/E ratio near 27. Today, it hovers near an even more aggressive 53. 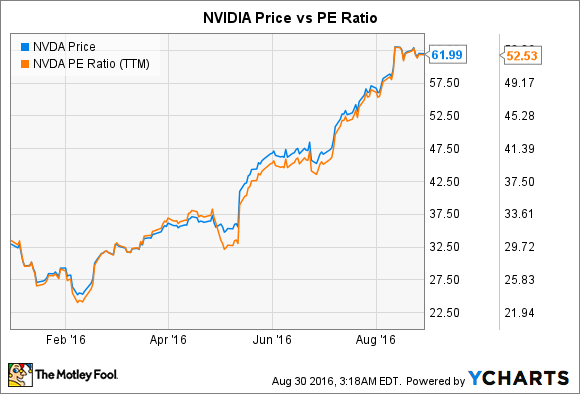 NVIDIA's valuation isn't astronomical, but it's aggressive, particularly for a chipmaker. Qualcomm and Intel are larger firms with arguably less room for growth, but both trade with P/E ratios below 20.

In other words, investors are expecting a lot from NVIDIA, and if they don't get it, shares could tumble. An operational stumble or poor quarter could be met with particularly heavy selling.

NVIDIA and AMD (NASDAQ:AMD) hold a virtual duopoly on dedicated graphics processors. NVIDIA is the dominant firm, capturing about 70% of the market last quarter, according to Jon Peddie Research, but its dominance may be slipping. In the same quarter last year, NVIDIA held almost 82% of the market, compared to AMD's 18% (which moved  up to 30% last quarter).

AMD's resurgence could continue in the quarters ahead, led by its recently released GPUs, the RX 480, RX 470, and RX 460. All three processors are considerably less powerful than NVIDIA's competing alternatives, but are also far less expensive. The cheapest card in NVIDIA's current lineup, the GTX 1060 3GB, retails for $199; all of AMD's cards are $229 or less.

NVIDIA remains wed to the market for traditional PCs

In the future, demand for NVIDIA's products could depend on the market for autonomous vehicles, AI assistants, drones, or data centers. And to an extent, NVIDIA does rely on those markets today. But for the time being, the overwhelming majority of NVIDIA's revenue comes from the sale of its GPUs, which are primarily used by PC gamers, and, to a lesser degree, graphics professionals.

Last quarter, more than 83% of NVIDIA's revenue came from its GPU sales, of which about 65% was gaming-related. PC gaming has been remarkably resilient in recent years -- NVIDIA's gaming revenue rose 18% on an annual basis last quarter, even as the broader market for traditional PCs continues to decline.

Nevertheless, it remains a risk factor. Rival AMD supplies chips for all current-generation gaming consoles, which compete with gaming PCs for limited entertainment hours. At the same time, although some tablets do use NVIDIA chips, the overwhelming majority of mobile devices do not use NVIDIA products. The gradual decline of the traditional PC platform hasn't hurt NVIDIA so far, but it's a possibility investors should be mindful of.