Teekay LNG Partners' improving results, and its other subsidiaries not sinking, helped to propel shares of Teekay Corp.

Shares of Teekay Corporation (TK -3.44%) surged 22.1% in August. Much of the gain in Teekay's shares is a result from one of its subsidiaries -- Teekay LNG Partners (TGP) -- producing better results as LNG shipments start to ramp up globally. At the same time, results from its two other subsidiaries -- Teekay Tankers (TNK -6.07%) and Teekay Offshore Partners (TOO) -- pretty much held serve, which is enough in the tough operating environment those two entities are facing today. 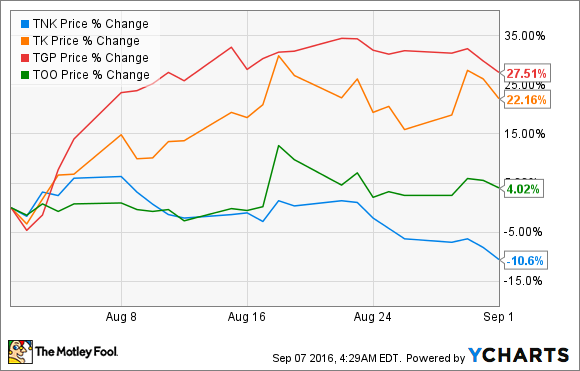 On August 4th, every company withing in the Teekay family reported earnings. The biggest surprise for investors was the results that Teekay LNG Partners was able to produce. Not only did the company generate an increase in revenue and distributable cash flow from the prior quarter, but it also announced that two of its newbuild vessels -- one Liquefied Petroleum Gas carrier and one Liquefied Natural Gas carrier -- immediately started work on long term charters. This suggests that the company should see even better results in the coming quarter.

The other thing working in Teekay LNG Partner's favor was that it was able to secure $900 million in lending to support the buildout of several vessels in the company's backlog. Some of these vessels are already designated for charter with LNG projects that are also under construction, so it was a little easier to find financing than if those vessels were being built without charters already in hand.

For Teekay Offshore Partners and Teekay Tankers, results weren't as promising. Revenue, net income, and distributable cash flow from Teekay Offshore Partners continue to decline. The biggest issue for these two entities is that demand for their services isn't as robust today. Oil tanker rates for Teekay Tankers continue to decline, and Teekay Offshore Partners had to deal with damage to one of its offshore platforms that forced a shut down of operations. The one thing that was promising, despite the issues these two companies faced, was that both were able to respond to the tougher environment by cutting operational costs and securing further financing to finish up newbuilds. Teekay Offshore also announced that it was cancelling orders for two vessels because of tepid demand.

The reason that all of this matters for Teekay Corp is that its earnings are all generated by these subsidiaries. With two of the three entities handling the downturn in the oil and gas industry rather well, while the other is starting to hit its stride, things are looking more promising than before.

Before getting too excited about these results, there are a couple things to keep in mind here. One is that Teekay and all of its subsidiaries were forced to cut their payouts significantly late last year as they were all facing a cash crunch. That led to all three stocks declining big time, and a 20% gain this past month is just a drop in the bucket. 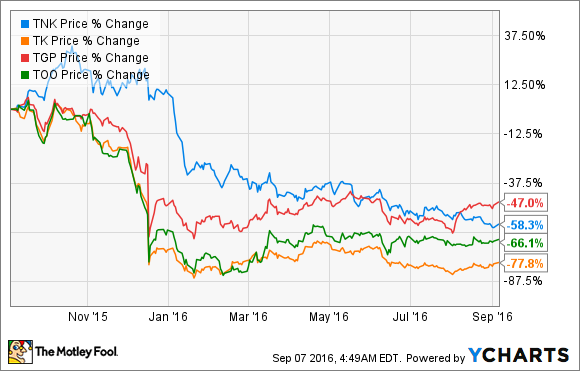 While things are starting to look slightly more promising than they were thanks to finding funding for its respective newbuild programs and, in the case of Teekay LNG Partners, a brighter future in sight, investors should remember that all of the Teekay subsidiaries have pretty sizable debt loads that also put the parent company at risk. Until we see some operational results that prove these entities have the profitability to support these kinds of debt loads -- or even better, to pay off some of those debts -- it's probably still best to look at these companies as speculative bets that carry some pretty significant risk.

Why Teekay Stock Gained Back 45% Today