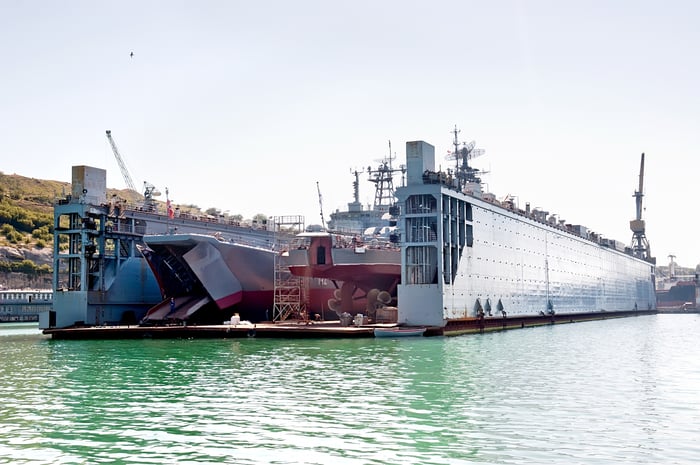 When countries order warships, they come in boxes even bigger than Amazon's. Image source: Getty Images.

In the global game of importing weapons, America and Russia -- once the world's two superpowers -- take a back seat. Instead, the world's top importers are China, India, and Saudi Arabia. That's according to a recent report out of SIPRI, the Stockholm International Peace Research Institute, which found that from 2010 to 2014, these three countries accounted for 25% of all arms imports around the globe.

Let me repeat that: There are 195 countries in the world today; just three of them accounted for $1 out of every $4 spent on weapons imports. And what's even more amazing: The world's top arms importer spent three times as much money on weapons imports as either No. 2 or No. 3.

Don't keep us in suspense! Who is it?

India: That's the world's No. 1 arms importer, according to SIPRI's data, for the period 2010-2014. And this arms importer accounted -- all by its lonesome -- for 15% of all weapons imports worldwide during those five years, versus 5% for each of China and Saudi Arabia.

Now, the data fluctuates a bit from year to year. In 2015, for example, SIPRI's data show that Saudi Arabia briefly edged out India in weapons purchases, spending $3.2 billion on imports to India's $3.1 billion in that single year. Similarly, in 2013, the United Arab Emirates briefly pushed Saudi Arabia out of the top three importers when the UAE's spending surged to $2.2 billion (the Saudis spent $1.7 billion that year).

But the long-term trend shows that India has been, is now, and probably will continue to be the world's biggest arms importer. So far this century, India has spent a combined $41.2 billion on weapons imports, averaging $2.7 billion a year. For comparison, China has averaged $2.2 billion in annual weapons imports since 2000, and Saudi Arabia less than $1 billion (although its spending has picked up dramatically in the past five years).

What does it mean to investors?

As the world's biggest arms importer, India is a hugely important market for U.S. defense contractors. In recent years, aerospace and defense giants Boeing (NYSE:BA) and Lockheed Martin (NYSE:LMT) have both booked billions of dollars in sales to the country -- for C-130 and C-17 military transport planes, for example.

And it's not just India. In fact, the entire Southeast Asian arms market offers a huge (and rare) opportunity for sales growth to U.S. defense contractors. As Bloomberg Businessweek recently put it, "last year contractors' sales to foreign customers jumped 10 percent, while U.S. revenue declined 2.4 percent." As a result, overall, the five biggest defense contractors in the U.S. now get 24% of their revenues from buyers outside the U.S. -- from India, to be sure, but also from Japan, the Philippines, Taiwan, Australia, and other nations in the region, looking to beef up their militaries to deal with an aggressive China.

So what does all of this mean to investors? If you're considering an investment in a defense contractor, it's more important than ever today to know which companies are doing the best job of selling into the Southeast Asian market. Learn more about that here.